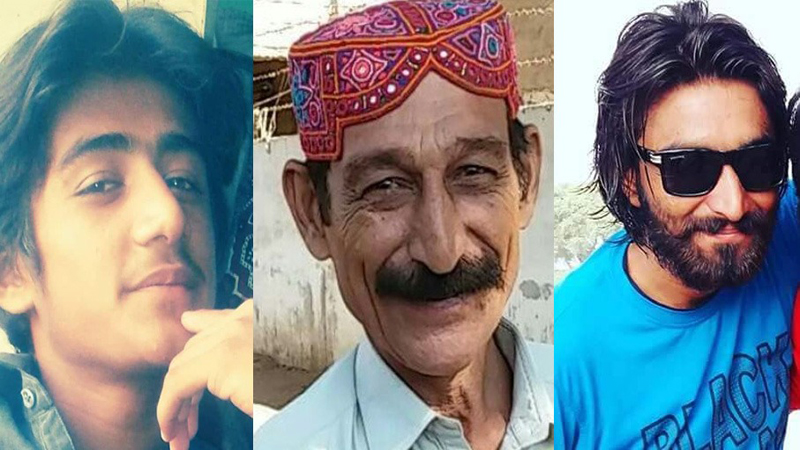 HYDERABAD: A renowned social and literary figure Amanullah Chandio, along with his 17 year old son Saifullah Chandio and 20 year old nephew Gulshan were taken away by unidentified men from their residence early on Monday morning.

Amanullah Chandio aged 59 was the father Sindhu Amaan Chandio, the deputy convener for Voice of Missing Persons of Sindh (VMP-Sindh) and Sanaullah Chanio, the leader of Mehran Students Council.

According to Sindhu Amaan Chandio, early on Monday morning at around 1 am more than twelve vehicles parked outside their house.

She said that men in plainclothes came out of the vehicles and tortured her. Sindhu said that the men forcibly kidnapped her father Amanullah Chandio, her younger brother Safiullah Aman Chandio and her cousin Gulshan.

Sindhu Amaan Chandio and Sanaullah Chandio said that the issue of missing persons in Sindh was becoming worse with the passage of time.

They said that the government and relevant human rights organisations were not lending their support to the cause of recovering missing persons.

The siblings said that the reason behind this disappearance was that they were proactively demanding the recovery of missing persons. “We vibrantly highlighted the issue of missing person all over the Sindh.

We also held many protests against enforced disappearances in Hyderabad and Karachi,” said Sindhu Amaan Chandio.

Sindhu Chandio also shared that her father was a notable journalist and literary figure and her missing brother and cousin used to contribute to social causes.

She said that her family was under a lot of pressure and it did not have the strength to bear it.

The siblings said that the movement of missing person’s family members would not end until their loved ones were recovered safely.

They said that organisations and individuals working for human security were being degraded.

Sindhu Amaan Chandio and Sanaullah Chandio appealed to higher authorities and human rights defenders to resolve the issue of enforced disappearances. They said that everyone had a right to express themselves freely.

According to Sindhu Aman Chandio, when she went to file a complaint against the kidnapping at the relevant police station, the police refused to file the case.

However, SSP Bashir Brohi at Jamshoro Police Station (PS) denied knowing anything about the case. “We have not arrested them,” said the SSP.

Chandio Welfare Association (CWA) also demanded the release of Amanullah Chandio, his son and his nephew. CWA said that they would soon launch a protest against ‘enforced disappearances’ of social activists and their family members.