In a new book, The Billionaire Raj, A Journey through India's New Gilded Age, James Crabtree finds the current profusion of billionaires in India, redolent of America's gilded age of yore

The American humorist and essayist, Mark Twain (1835-1910), popularized the phrase, ‘the Gilded Age’, by using it as the title of one of his earlier books.

It refers to the period of late nineteenth century in America when many people accumulated an incredible amount of wealth in a short period of time. However, their wealth was not equitably distributed, and even though their society glittered like gold from the outside, inside it was hollow; beset by the vast economic disparity among its people.

In a new book, ‘The Billionaire Raj, A Journey through India’s New Gilded Age’, James Crabtree finds the current profusion of billionaires in India redolent of America’s gilded age of yore. He is a professor at the National University of Singapore and spent nearly five years as the Bureau Chief and reporter for the Financial Times, while based in Mumbai, the commercial capital of India. He asserts that India of the forties and fifties, when its founding fathers Mahatma Gandhi and Jawaharlal Nehru were preaching socialism and advocating austerity of lifestyle, has now vanished and been replaced by avarice and a scramble for the acquisition of wealth. Nehru’s vision was rooted in the rejection of the free market economy, which helped bridge the gap between rich and poor. However, now the country’s top one percent own almost sixty percent of its wealth. 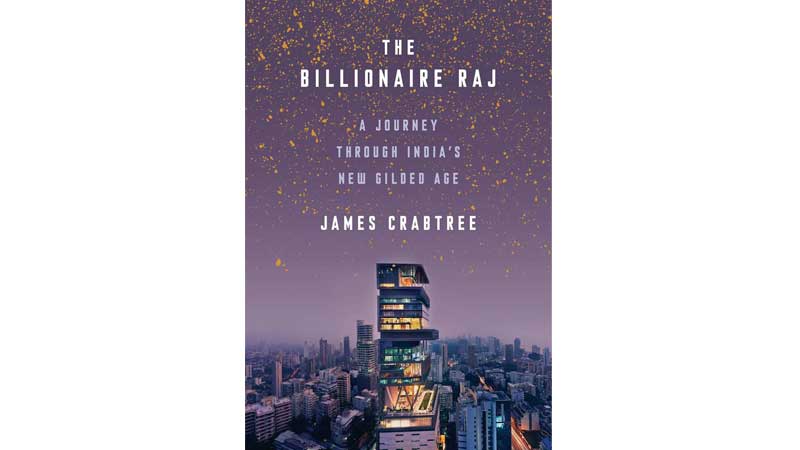 Crabtree travelled extensively in India and interviewed many billionaires. Among them was Mukesh Ambani, the richest man in the country, with a net worth of $38 billion who perhaps best personifies the new class of Indian tycoons. Indians have an average income of less than $2,000 a year, yet Ambani on the other hand owns a conglomerate business empire, with diverse interests, including oil and gas exploration, telecommunication and television. His residential tower, Antilia, in Mumbai is about the size of Versailles, the 17th century palace built by French emperor Louis XIV. It is a 27-storied glittering tower that comprises of every amenity you can imagine, with a staff of 600, and a rumoured monthly electricity bill of seven million rupees.

The change in Indian demographics is perhaps best illustrated by the fact that merely two-decades ago, only two Indians were featured in the celebrated Forbes list of the world’s wealthiest individuals. Now this number has risen above 100, only surpassed by the US, China and Russia.

The super rich in India, much like those in Russia, are known for their extravagant lifestyle and their ability to influence social norms. India’s economy surged with the arrival of the new century (2004-2014), when the country, helped by liberalization and globalization, experienced an unprecedented growth rate, exceeding eight percent. The abundance of money in the hands of a few has tainted the electoral process, with black money indirectly playing a malignant role. According to best estimates, the elections in 2014 cost in excesses of $5 billion dollars, much of it unaccounted black money.

Merely two-decades ago, only two Indians were featured in the celebrated Forbes list of the world’s wealthiest individuals. Now this number has risen above 100; only surpassed by the US, China and Russia.

Crabtree quotes Dr. Amrita Sen, Nobel laureate, distinguished intellectual and economist, who states that “the economic reopening in India had indeed created a more vibrant economy, but one that was less equal and fair”. He did not think that “having a lot of rich people was necessarily a problem, as long as they get no special favours and pay fair taxes”. However, in common with many developing countries, only one percent of their population pays tax.

The book comprises discrete chapters, addressing often disconnected topics that could have been written for academic or financial magazines at different times. In one of the final chapters, entitled, “the Tragedies of Modi” the author focuses on the Indian Prime Minister and his administration. In a massive public gathering of American Indians in September 2014 in New York, Modi characterized India as having attained independence after enslavement for over a millennium, implying that the thousand-year Muslim rule, like that of the British Raj, was also an alien domination. Lately, the weight of his responsibilities as Prime Minister have made Mr. Modi more cautious in what he says in his public speeches.

Modi and his Hindu nationalist party have been active in moving India’s orientation from a pluralistic, secular society, so assiduously nurtured by its leaders after independence, to one dominated by Hindutva. As part of the effort, all mention of India’s iconic figure, Jawaharlal Nehru, is being erased from school text books, so that the new generation will remain ignorant of the contributions of the legendary prime minister who put India on its modern, progressive trajectory. Some insidious elements have been introduced to sully India’s venerated democratic process. The book fails to fully highlight the key role that the anti-Muslims rhetoric of Modi’s Bharatiya Janata Party (BJP) and Rashtriya Swayamsevak Sangh (RSS) played in the 2014 elections. And, they are likely to employ the same tools in the next elections in 2019.

The Billionaire Raj is a well-researched book, with an abundance of references to scholarly work and personalities. It deals extensively with socio-economic conditions and the political state of India under the current Modi Government. Apparently, unlike Russia, the billionaires do not have much direct influence on shaping the political fortunes of the country. Finally, despite the ponderous writing style, the book will be of great appeal to those with serious interest in India’s fast emerging status as an economic powerhouse.

The writer is a Health Scientist Administrator at the National Institutes of Health, Bethesda, Maryland and an Assistant Professor at the Harvard Medical School with a PhD from the University of Birmingham, England