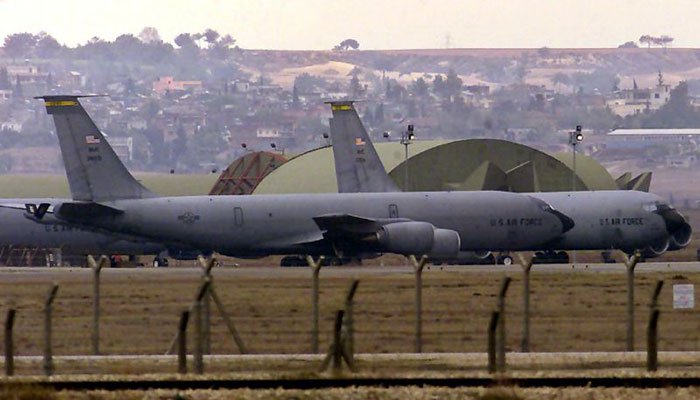 Then on Friday, Turkish President Recep Tayyip Erdogan wrote in The New York Times that unless Washington can “reverse this trend of unilateralism and disrespect,” Turkey will “start looking for new friends and allies.”

The warning came after Erdogan held a phone call with Russian President Vladimir Putin to discuss economic and trade issues, as well as the Syria crisis.

Military ties between Turkey and the US are already fraught over Washington´s support to Syrian Kurdish fighters known as the YPG, which Ankara sees as little more than an offshoot of the “terrorist” Kurdistan Workers Party (PKK).

And tensions were heightened further after Turkey, despite being a NATO ally, entered into an understanding to buy Russia´s advanced S-400 air defence system.

Such a move would defy US sanctions on Moscow, and Turkey´s increasingly cosy relationship with Putin has alarmed both the US and the European Union.

Trump on Monday signed a defence authorisation act that notably prohibits the delivery of F-35 Joint Strike Fighter aircraft to Turkey if it goes ahead with the S-400 purchase.

Retired Admiral James Stavridis, an ex-NATO supreme allied commander, urged Washington and Ankara to do all they can to improve relations.

“To lose Turkey would be a geopolitical mistake of epic proportions,” he told MSNBC on Monday.

“Hopefully we can pull them back, but Turkey has to make the first step at this point.”

Turkey´s dialogue with Russia has led some to question its reliability as a NATO partner, and even whether it should remain in the alliance.

But Joshua Landis, director of Center for Middle East Studies, told AFP that Turkey´s ejection from NATO would be disastrous.

“There´s no upside to kicking Turkey out, it´ll just force Turkey into Russia´s hands,” he said.

Experts are looking to Incirlik, a Turkish air base in southern Turkey, just 70 miles (110 kilometers) from the border with war-torn Syria. The base has been a frequent pawn during decades of ups and downs in US-Turkey relations.

Incirlik´s location relative to the Middle East makes it a key strategic asset for the US military and for NATO, and the United States until recently flew bombing runs from there as it fought the Daesh group in Iraq and Syria.

Separately, the facility is thought to hold a stockpile of about 50 American nuclear bombs.

The arrangement works for Turkey too, as the US military provides Turks with intelligence and drone surveillance over the border region, and helps Ankara monitor the outlawed PKK.

Last year, Muharrem Ince, the main opposition candidate in Turkey´s presidential election, threatened to shut Incirlik unless the US extradited Fethullah Gulen, the exiled Muslim preacher Ankara blames for an attempted coup in 2016.

Ince went on to lose the election to Erdogan by a large margin, but Incirlik remains a key issue.

Following the coup attempt, the Turkish base commander at Incirlik was arrested on suspicion of complicity in the plot.

And according to Turkish newspaper Cumhuriyet, pro-Erdogan lawyers have filed a lawsuit calling for the arrest of US troops at Incirlik on similar suspicions.

Both sides stand to lose if US-Turkey military relations go south, but experts say it would hurt Turkey more.

For instance, the diplomatic crisis with Turkey could jeopardise a $1.5 billion deal that Ankara has made with Pakistan to sell 30 Turkish-made helicopter gunships.

Because the choppers use US parts that require an export license, the sale could ultimately be at risk.

“Turkey is going to be hurt the most because it´s weaker and America is just a big elephant,” Landis said.

In situations like this, it “ultimately hurts the smaller countries a lot more.”