The ringing silence about partition in Urdu literature 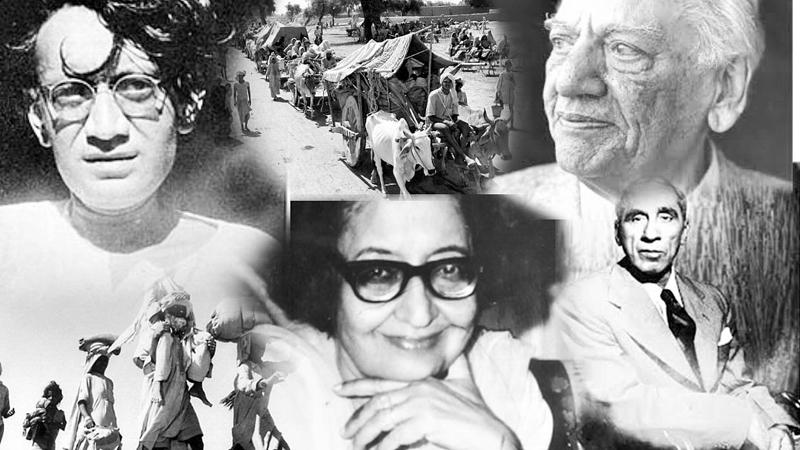 Indian partition left many indelible political, social, economic and emotional impacts on both states. Urdu literature took a new direction after partition with short stories or afsanay of geographical realities, historical events, and political situations being narrated by the writers.
Before partition, Urdu literature was dominated by the Progressive Writers’ Movement (Anjuman Taraqqi Pasand Musannifin), which emphasised anti-imperialism, equality, and justice in the undivided British India. Progressive writers and poets like Faiz and Manto were not convinced by the idea of making a country on the basis of religion. For them, freedom meant liberation from capitalist exploiters and feudal lords. The Progressive Writer’s Movement continues to influence Pakistani literati today.
“Progressive Writer’s Movement gave a voice to the ‘common man’ of the sub-continent,” says Asghar Nadeem Syed, the writer of Mujhay Kahani Mili (partition story). “Problems of labors, farmers, and minorities were addressed for the first time in Undivided India,” he added.

Events loosely related to the partition, like the Babri mosque demolition in 1992, Kashmir issue, tales of migration and rising nationalism on both sides have remained powerful themes in Urdu literature. But the writers and poets failed to address some very important partition-related issues

The post-partition Urdu literature is saturated with tales of grievances of the migration, emotional stories of the massacres, and political events which remained obscure for many years. Soon after 1947, patriotic stories and poetry categorised as “milli wahdat” (national unity) sentiments emerged. This type of literature had a smaller life than partition stories which were based on humanity and emotions. Political analysis took over Urdu literature very soon thereafter.
Krishan Chander, who voiced the issues of common man of India, wrote many stories about partition. He penned down stories on Kashmir issue as well. His highly renowned novel Mitti ke Sanam (stone of soil) is about the childhood memories of a young boy who lived with his parents in Kashmir. Another one of his novels is called Gaddar (rebel) and narrates the events of the partition of India and Pakistan.
Abdullah Hassan’s Udas Naslain (the weary generations) highlights the problems with feudal system in undivided India. It is also considered as an important addition in the Urdu literature after partition. Apart from many short stories, the writer also wrote Nadar log (intrepid people) which is considered a sequel to Udas Naslain.
Ahmed Nadeem Qasmi, Intzar Hussain, Mumtaz Mufti, Qudrat Ullah Shahab, Bano Qudsiya, Ismat Chughtai, Ghulam Abbas and many other writers penned down the stories of partition. Each of them had a different style but partition remained a powerful theme in Urdu literature.
Events loosely related to the partition, like the Babri mosque demolition in 1992, Kashmir issue, tales of migration and rising nationalism on both sides have remained powerful themes. But the writers and poets failed to address some very important partition related issues. Urdu literature did not voice the stories of those minorities who had migrated from India to the nascent state. Issues faced by Hindu community particularly in Sindh and Rajasthan area have not been narrated yet.
“Urdu literature based on after partition narratives has somehow failed to cover the stories of minor yet important characters of the past,” says Harris Khalique, an Urdu writer and poet. “The tragedies of Pakistani Sikh and Hindu community were less addressed, despite some writers such as Manto, Jamila Hashmi (writer of iconic “Dasht E Soos”) the writers did not narrate the sufferings of women and minorities (i.e. Ahmadi community),” he added.
There must be very tragic stories on their part as well. The minorities who had been living in the country faced different types of problems. From the idea of “not migrating” to the decision of living as a minority for forever, there must have been very mesmerising stories which have not been narrated yet. However, the minority groups, which decided to migrate, suffered from other problems. And sadly Urdu fiction and poetry failed to narrate their side of stories as well.
In Khalique’s view, the miseries of these minor characters of history could have been narrated with the significance they deserve. “In my opinion, the corpus of partition literature is lob-sided,” Khalique asserted.
Although, the partition of Punjab and Bengal were events of great significance, and a lot of have been told about in special regional consideration. The political, emotional and physical sufferings of the migrants from other parts of newly formed country remained untold.
“The need of the creation of a ‘separate’ country has not been addressed in Urdu fiction yet,” says Asghar Nadeem Syed. “Urdu literature has narrated the sufferings of partition but no one dared to write about who actually is responsible for these sufferings. The reason of not directly writing on the issue is that the writers were and are politically influenced.”
Although, Urdu stories do criticise the ‘idea’ of partition, but the exact question of the ‘need of separation’ has not been raised in Urdu fiction or poetry yet.
Qurratulain Hyder’s Aag ka Darya (river of fire), tells the stories of pre-partitioned India, and questions the “great divide.” Hyder garnered immense respect and literary acclaim among her readers. Her novel became a seminal work and gave other authors the courage to confront issues.

Before partition, Urdu literature was dominated by the Progressive Writers’ Movement, which emphasised anti-imperialism, equality, and justice in the undivided British India

Similarly, Saadat Hassan Manto’s remarkable partition stories gave Urdu literature a new direction. He was a visionary who became controversial. Manto analysed the psychological impact of Indo-Pak separation in his short stories Yazeed and Titwal ka Kutta (dog of titwal). In his short stories like Thanda Gosht (cold meat), Khol do (open), Toba Tek Singh, and Tamasha, he sketches a heart-wrenching yet vivid picture of the partition. Manto was famous for his ‘provocative writings.’ He raised the issues of common man which were worsened due to the partition. Qurratulain Hyder and Manto faced a lot criticism for writing directly or indirectly on the question of partition and its aspects.
Some poets such as Sahir Ludhianvi, Faiz, Noon Meem Rashid and Faraz remained progressive.
Partition of East Pakistan (Bangladesh) was a tragic incident for the newly formed state. Sadly there are no significant Urdu writings on the unfortunate incident. There are political assessments of the separation of East Pakistan but Urdu fiction and poetry lag behind.
Post-partition Urdu literature also promotes certain religious and cultural ideas. Muhammad Hasan Askari gave the idea that literature should be influenced by the notion of “Islamic values and aspirations” as the base of the newly created country. This narrative was going parallel to the partition stories and the progressive movement’s influenced literature.
Asghar Nadeem Syed believes that “the literature cannot be influenced or dictated and has no ideological boundaries.” He adds that the movement was unnecessary though Hasan Askari himself was a visionary and liberal person.
The Islamic literature movement was considered a reactionary movement against the Progressive Writers Movement. The writers whose content was influenced by Askari’s views included Mumtaz Shirin, Samad Shaheen and at a later stage, Saleem Ahmed, Shamim Ahmed, Sajjad Baqar Rizvi and Jameel Jalibi.
As far as poetry is concerned, the sufferings of partition are less often addressed in Urdu poetry as compared to the prose. Harris Khalique says that the crimes committed due to patriotism were never acknowledged in either prose or poetry. He believes that the sufferings of the migration and partition are still relatively unaddressed.
Apart from Punjabi poets such as Amrita Pritam (who wrote Ajj aakhaan Waris Shah nu (Today I invoke Waris Shah – “Ode to Waris Shah”) and Ustad Daman, there is very little written about partition.
Partition left a great impact on Urdu literature and thousands of stories have been addressed but it is a mystery that either the ‘best’ narrative is yet to be written or not.
“Urdu literature and partition are inseparable, as long as the literature exists the writers would remain under the influence of partition,” says Asghar Nadeem Syed.