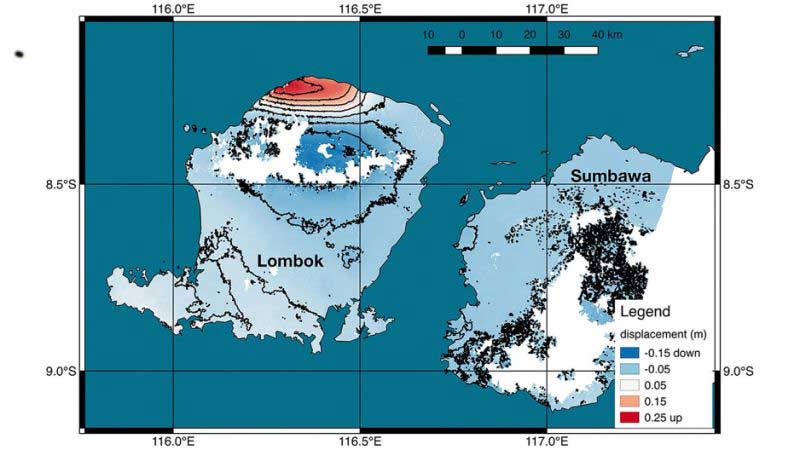 Scientists say the powerful Indonesian earthquake that killed nearly 400 people lifted the island it struck by as much as 25 centimeters (10 inches).

The National Disaster Mitigation Agency said on Saturday that 387 people died, jumping from the 321 it reported the previous day, as search and rescue teams continued to sift through the rubble and people already buried by relatives are accounted for.

Using satellite images of Lombok from the days following the Aug. 5 quake, scientists from NASA and the California Institute of Technology’s joint rapid imaging project made a ground deformation map and measured changes in the island’s surface. In the northwest of the island near the epicenter, the rupturing faultline lifted the earth by a quarter of a meter. In other places it dropped by 5-15 centimeters (2-6 inches).

NASA said satellite observations can help authorities respond to earthquakes and other natural or manmade disasters.

Some 390,000 people, about 10 percent of Lombok’s population, are homeless or displaced after the earthquake, which damaged and destroyed about 68,000 homes.

Nearly a week since the 7.0 quake, Lombok is still reeling but glimmers of normality are returning and devout villagers are making plans for temporary replacements of mosques that were flattened.

In Tanjung, one of the worst affected districts in the hard-hit north of the island, a food market opened Saturday and locals bought vegetables and fish. Some shops also opened for business despite being in damaged buildings.

“I had to borrow money from someone to buy morning glory to be resold here,” said Natbudi, one of the market vendors. “If I just stay at the camp and don’t come here to sell then I don’t have money to buy rice.”

Lombok, a popular and less developed tourist destination than neighboring Bali, was hit by three strong quakes in little over a week and has endured more than 500 aftershocks.

Villager Sunarto, buying fish at the makeshift market, said it was a relief to do something ordinary.

“I feel happy and thank God that finally the market is open,” he said. “We can buy our needs while waiting for the situation to get back to normal even though we’re still worried.”

Indonesia is prone to earthquakes because of its location on the “Ring of Fire,” an arc of volcanoes and fault lines in the Pacific Basin. In December 2004, a massive magnitude 9.1 earthquake off Sumatra triggered a tsunami that killed 230,000 people in a dozen countries.