* Say the poor state of the economy is due to the lack of respect for the Constitution among the country’s
industrialists, and not because of trade unions 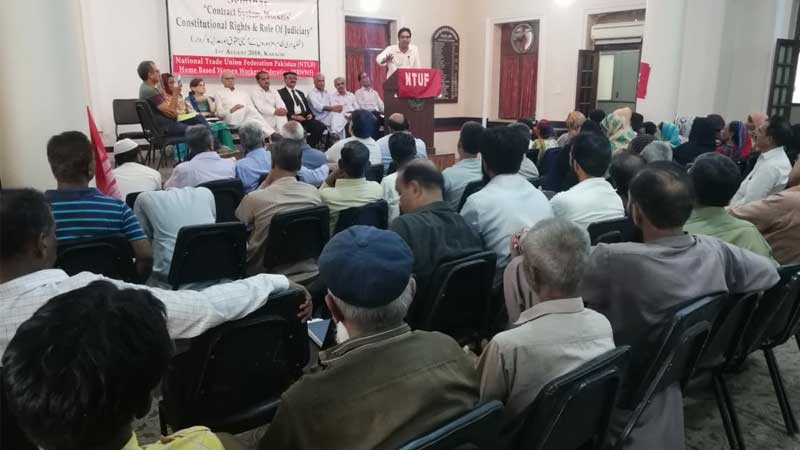 KARACHI: Speakers at a seminar on Contract System, Labor Rights and the Role of Judiciary on Wednesday expressed grave concerns on the Chief Justice of Pakistan’s recent remarks on trade unions.

The seminar was organised jointly by the National Trade Union Federation (NTUF) and the Home Based Women Workers Federation (HBWWF). NTUF Sindh general secretary Riaz Abbasi was in chair.

Referring to CJP Mian Saqib Nisar’s recent remarks that he would have banned trade unions had they not been permitted under the Constitution, NTUF’s Nasir Mansoor said that the statement had strengthened the view that all state institutions were complicit in the exploitation of the country’s working classes at the hands of the capitalists.

He said the CJP had made the statement while responding to an application submitted by trade union representatives in the Lahore registry of the apex court, adding that the top judge held trade unions responsible for the condition of the economy.

He said the facts of the matter were that labor unions were banned in around 98 percent of industries, and other workplaces in the country. “More than 95 percent of the workers do not get minimum wages, appointment letters, social security, pension and other basic rights because of the ban on trade unions. Therefore, the destruction of the economy is not due to labor unions and workers, but due to the refusal of the industrialists to respect the law and the Constitution,” he said.

Other speakers said that all state institutions inlcuding the judiciary had let down the working people.

They demanded that the chief justice should withdraw his statements and tender an apology. They said all political parties, associations of lawyers and labor rights and the Supreme Judicial Council should play their role in enabling the working people get their fundamental rights promised in the Constitution.

Referring to the Senate as ‘an active democratic forum’, the speakers said that it should start a debate on the issue and ensure safeguard of the rights of workers. They added that the contract labour system prevalant in the country had already been deemed illegal by the apex court and urged the authorities concerned to take action against those still following it at their workplaces.

A press statement issued on the occasion said, “The right of forming trade unions and giving safeguards to employment is a fundamental right granted under Article 17 of the Constitution. As many as 36 conventions of the International Labor Organisation (ILO) ratified by the government of Pakistan also provide guarantees to these rights. The right to form trade unions is mentioned in the ILO convention no87 which was ratified by the government in 1948, soon after the creation of this country. The remarks of the honourable Chief Justice of Pakistan regarding these internationally accepted rights are not only non comprehendible but also worrisome. It is a fact that the founder of Pakistan Muhammad Ali Jinnah himself served as the president of a postal union. If the head of the judiciary gives biased comments on nationally and internationally accepted labour rights, it will create concerns at local and international level and tarnish the image of the country.”

The statement added that such statements could directly affect the special privileges held by the country under the Generalised System of Preferences +, under which Pakistani exports to European markets get preferential treatment.

In the statement, the NTUF also reminded that when a military dictator had slapped curbs on the judiciary, it was the workers, alongwith the lawyers, who took an active part in the movement for restoration of independent judiciary. However, the workers were deprived of ‘the fruits of the restoration of judiciary’.