12-day anti-measles campaign to be launched in October 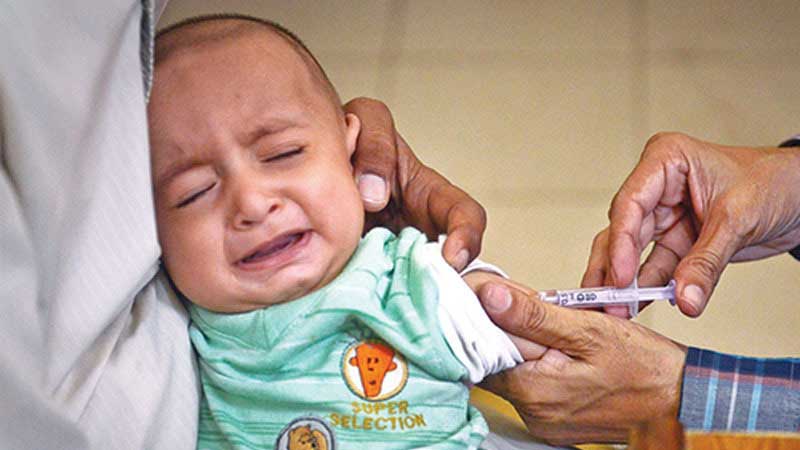 A 12-day anti-measles campaign would be launched from October 15 which would be carried out until October 27.

During this campaign, 20 million children from the age of six months to 87 months would be inoculated measles vaccine.

The United Nations Children’s Fund (UNICEF) would provide all out cooperation to the primary and secondary health department for this campaign.

This was announced during the meeting between Primary & Secondary Health Secretary Ali Bahadur Qazi and the delegation of UNICEF on Thursday. The delegation was led by Dr Tahir Manzoor, where others were also present in the meeting. It was informed that the micro plan of anti-measles campaign has been prepared and the UNICEF teams would visit all the districts to check the micro plan in collaboration with health chief executive officer.

Dr Tahir Manzoor briefed the secretary that UNICEF is providing all kind of cooperation to the Punjab government for the improvement of Expanded Programme on Immunisation Cold Chain Management, combating against communicable diseases of children, preparation of urban health strategy, better care of infants and to overcome pneumonia and diarrhea.

Dr Manzoor informed that pilot project of Kangaroo Mother Care has been launched in different districts of the province for better healthcare of new born babies and this project is being extended to other districts of the province. He further said that UNICEF is also imparting training to the skilled birth attendants and other concerned staff for infection control in new born babies

He informed that UNICEF is providing technical cooperation, training and capacity-building of the staff and financial support. UNICEF is also collaborating in dissemination the knowledge and awareness to the health providers as well as to the community.

Dr Mushtaq Rana of UNICEF revealed that pneumonia and diarrhea are the basic causes of infant mortality in Pakistan. The UNICEF delegation briefed the secretary about the new initiatives being taken by UNICEF during 2018.

The secretary also announced the schedule of anti-measles campaign in Punjab. He also directed the DG HS and other officers to strengthen the steps taken for the control of diseases. He appreciated the efforts of UNICEF for knowledge sharing and training of the doctors, nurses and lady health workers and assured that Punjab government as well as primary and secondary health department would extend full cooperation to make the anti-measles campaign a success story and would also take UNICEF into confidence in policy decisions regarding mother and child health to improve the indicators of infant mortality and maternal mortality.