PTI leads, while others cry foul

* PTI leading on 109 NA seats, followed by PML-N with 67 and PPP with 38 seats
* Voter turnout estimated at between 50 to 55 per cent
* PML-N rejects poll results due to ‘massive irregularities’
* PPP claims all parties but one being pushed to wall
* ECP rejects claims of all political parties, demands evidence 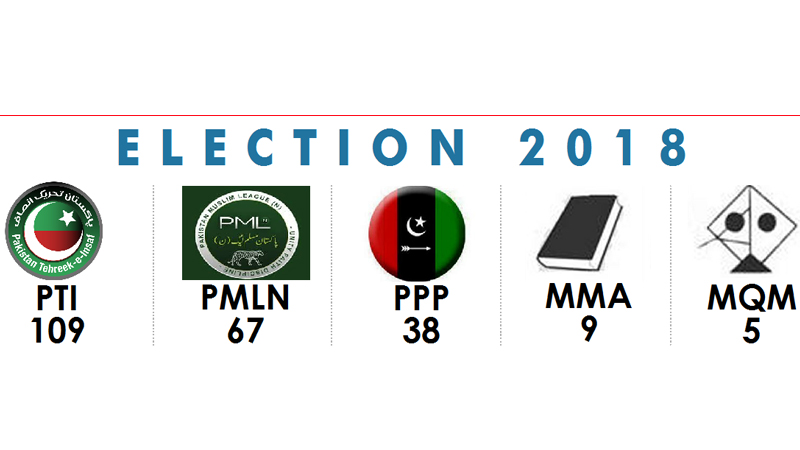 ISLAMABAD: With counting of votes still underway, preliminary and unofficial results based on reporting of 26 per cent of the total polling stations show Pakistan Tehreek-e-Insaf (PTI) leading on 109 seats, followed by Pakistan Muslim League-Nawaz’s (PML-N) 67 and the Pakistan People’s Party’s (PPP) 38 seats.

In Punjab, with results from 19 per cent polling stations available with the Election Commission of Pakistan (ECP), the PML-N is currently leading the race with 137 provincial seats and PTI is closing in with 115 seats. Independent candidates are leading the race at 29 seats in the province.

In Khyber Pakhtunkhwa (KP), the PTI is clearly steering ahead with 62 seats against Awami National Party (ANP), which currently has 10 seats, as per reporting from 16 per cent polling stations in the province. The Muttahida Majlis-e-Amal (MMA) is also leading on 10 provincial assembly seats.

In Sindh, the PPP is currently leading the race with 73 seats, followed by PTI’s 21 and MQM’s 16 seats.

In Balochistan, Balochistan Awami Party (BAP) is leading the contest with 13 seats while Balochistan National Party (BNP) has secured nine seats so far.

Gallup Pakistan has estimated voter turnout at between 50 to 55 per cent in an electorate of nearly 106 million – similar to the previous contest in 2013.

According to the data released by ECP, a total of 3,459 candidates – 1,623 from Punjab, 824 from Sindh, 725 from Khyber Pakhtunkhwa and 287 from Balochistan – were cleared to run for the 272 general seats of the National Assembly. However, elections in two constituencies – NA-60, NA-108 – were later postponed by the commission.

A single party will need to bag at least 137 of the directly elected seats to be able to form the government on its own.

Counting was going on at polling stations of most of the constituencies till the filing of this report.

Hours after voting came to an end at 6pm and preliminary results started pouring in, the PTI supporters across the country started early celebrations in anticipation of their party’s victory in the general election while PML-N cast doubt over the counting process.

PML-N President Shahbaz Sharif has rejected the poll results. In a tweet, he said the party rejected the results ‘due to manifest and massive irregularities’.

“Pakistan Muslim League (Nawaz) wholly rejects the results of General Elections 2018 due to manifest & massive irregularities. Form 45 was not given to our agents, results were stopped & votes were counted in the absence of our poll agents. This is both unbearable & unacceptable!” he posted on his official Twitter account.

PML-N spokesperson Marriyum Aurangzeb, while speaking to media, also raised objections over the counting process and alleged that the party’s agents were being forced out from the polling stations in various constituencies. “The counting process is being carried out behind closed doors and changes are being made to Form-45,” she alleged. 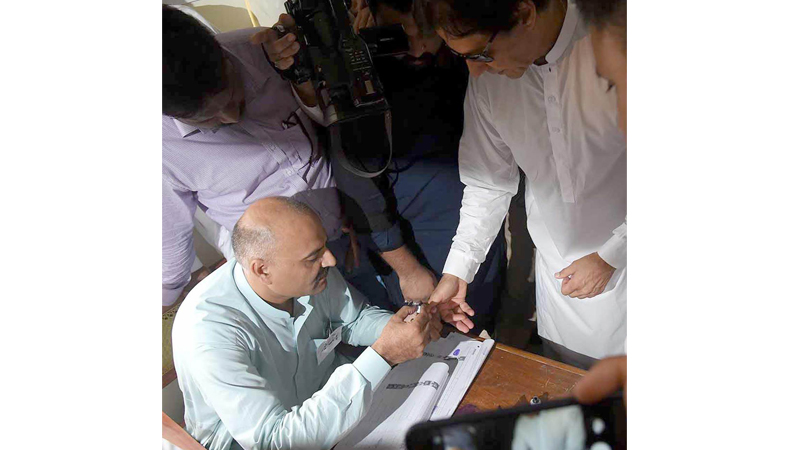 PPP Chairman Bilawal Bhutto also tweeted saying he had not received any official results from any constituency where he was contesting, despite it being past midnight. “My candidates have been complaining that polling agents have been thrown out of polling stations across the country. Inexcusable and outrageous.”

PPP’s Sherry Rehman also claimed that “there has been a clear trend of interference, in which all parties except one are being pushed to the wall”.

Pakistan People’s Party (PPP) was conspicuous by its absence in Lahore on the Election Day on Wednesday.

The party’s election activities were rarely seen in the city, despite a candidate contesting from almost all the metropolitan constituencies. During the visits of many polling stations in Lahore, Daily Times observed the negligible presence of PPP camps outside polling stations. According to various reports, PPP also did not depute polling agents inside the polling stations.

If the popularity of a party is to be judged through its election related festivities and activities; then Lahore witnessed a lapse in PPP banners, promotional material and polling camps. The city that was once a stronghold for Zulfikar Ali Bhutto has received little attention in the current PPP electoral strategy.

The only constituency where some activity of PPP could be seen was NA-132, from where Samina Khalid Ghurki was contesting. Ghurki led some rallies in her constituency on the Election Day, after casting her vote in Padhiana village polling station. However reports state that she relied more on support for her family, rather than the party itself.

PPP also faced quite some embarrassment before the elections, as just last week PPP candidate for NA-124, Chaudhry Zaheer joined Pakistan Tehreek-e-Insaf (PTI) and pledged to support PTI’s Nauman Qaiser in NA-124, instead.

Although, most of the PPP candidates from Lahore were unfamiliar faces, some old candidates of the party including Hafiz Zubair Kardar (NA-125) and Chaudhry Aslam Gill (NA-133) were also taking part in the elections but their election festivities were far from main stream. Chaudhry Aslam Gill is known to be a confidant of Benazir Bhutto who faced many hardships during Ziaul Haq’s dictatorial regime.

On the other hand, the newly formed far right Tehrik-e-Labaik Pakistan (TLP) volunteers led rallies throughout the city all day. Talking to Daily Times, Mujahid Rassol said, “we didn’t get a single penny from our party to establish the polling camps, we contributed from our own pockets for the election-day festivities,” he said, while sitting at one of the polling camps in NA-124. The election-day activities of TLP also surpassed the festivities of Milli Muslim League, as MML did not campaign as extensively as they did whilst contesting the 2017 by-elections in NA-120.