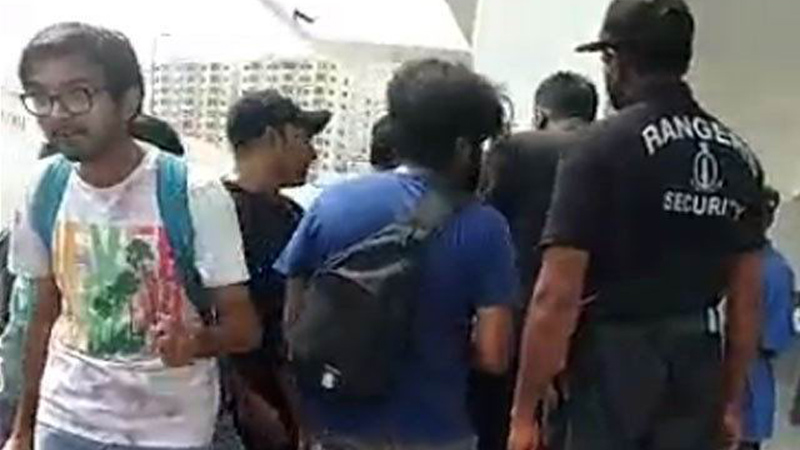 Premiere of Ali Zafar’s new movie ‘Teefa in Trouble’ came under controversy as citizens in Karachi and Lahore gathered outside the cinemas and chanted slogans against sexual harassment, urging the actor to come clean on allegations of sexual harassment leveled against him by singer and actor Meesha Shafi.

Protesters at Karachi’s Nueplex cinema were briefly detained by the staff on Saturday. According to reports, the protesters were also manhandled by the cinema security after being ushered to the basement. The management, however, is of the opinion that protesters crossed their boundaries because such protests cannot be held at a private property and action had to be taken.

“Some of the protesters forcibly entered into the cinemas on the first floor without tickets,” a Nueplex staffer told media. Rangers was called in to handle the protest.

Meanwhile, young activists and students staged a similar protest at Cinestar cinema in Lahore against the screening of Zafar’s movie. They were holding placards inscribed with slogans against sexual harassment.

At the movie’s premiere at Lahore’s Cinestar, the son of the owners of Bareeze, Waleed Zaman, shouted his support for Zafar saying “I support the sexual harassment of women”. He said this while passing by a group of protesters who were gathered outside the cinema. His statement was recorded on camera and the clip went viral on social media. Users took Zaman to task for his vile behavior and vowed to boycott the brand his family owns.

While Zaman has apologised in a social media post, a debate about misogyny in Pakistan and sense of entitlement enjoyed by elitist men has began.