How do the three biggest parties approach economic growth 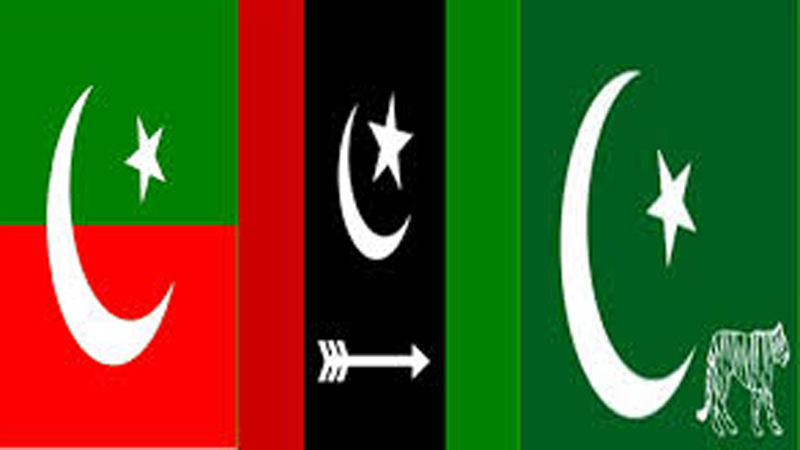 The economic manifestos of political parties are important documents to illustrate the thinking of leadership regarding economic growth, job creation, and social justice. Major parties came up with their manifestos after a significant wait, and so close to the elections that one cannot advocate an in-depth debate on features of (economic) thinking within parties; nevertheless, a broad comparison can still be carried out of instruments selected by parties to approach economic reform.

It is important to mention at the outset that Pakistan achieved an economic growth rate of over five percent, after a decade of under three percent average annual growth of national income. This growth, however, is heavily dependent upon the country’s ability to sustain high import payments (e.g. global oil prices are on an increase), and manage current and future debt for infrastructure and balance of payments financing needs. There are also risks to growth from fiscal deficit for which the government will need to sharply bring down its expenditures e.g. payments towards circular debt in the energy sector, losses of public sector enterprises, etc.

Given these circumstances, one doesn’t expect the PML-N’s economic manifesto to be very different from its outgoing government’s strategy which was to keep the macro economy stable and sustain growth in the short-to-medium term. This essentially relied on expansionary fiscal measures, whereby, domestic and foreign debt inflows were encouraged and fiscal deficit and current account gaps were often termed essential to remain on a growth path. A major overhaul of tax system was only introduced during the last month of the PML-N’s tenure.

Here, the key question is: whether the other two major parties, PTI and PPP, would offer a different strategy towards a more prudent reform of the economy? The latter also has the benefit of being in the government in the recent past.

The PPP’s growth strategy focuses on revival of the agriculture sector through a Zarai Inqilab programme. Through this scheme, the PPP aims to register farmers and agricultural workers under the Benazir Kissan Card scheme for disbursement of subsidy and crop insurance. They also promise to overhaul the price and support system in agriculture sector. There will be legal recognition of women agricultural workers through Benazir Women Agricultural Workers Programme. A reform of agriculture extension services and more efficient use of water in this sector is also promised.

The PPP’s growth framework also provides for a strategy aimed at industrial revival. A promise has been made to devise a rehabilitation plan to resurrect sick units. The strategy also aims to ensure supply and just cost of energy faced by the industry. The manifesto also promises to avoid the past tradition of allowing subsidies for indefinite period to certain industries. Any incentives allowed will be time-bound and based on performance – something which in actual terms is hard to judge.

Given that the services sector contributes the largest chunk of the national income, the PPP aims to offer certain incentives, particularly for the information technology sub-sector. The promise includes a decent regulatory environment for e-transactions, lowering barriers to entry for startups, enhancing credit, one-window for investors seeking regulatory approvals, waiver of duties on machinery, and a campaign to facilitate the use of financial technology.

The PTI’s growth framework also provides for interventions to bring about greater expansion and productivity in key economic sectors. In the case of agriculture, major focus is on bringing the cost of doing businesses down for the farming community. This is proposed to be done through a sharing of investment amount, creating new warehouses through public-private partnerships, selective deregulation in seed market, reducing effective import duties faced by the farmers, encouraging banks to launch digital loans for quick access with easier terms, and expanding the extension schemes to provide on-farm technical support.

A focus on livestock sector is expressed and it is proposed to increase the vaccination availability, improve standards in slaughterhouses, improve milk and meat standards, develop a smart disease management plan and bring about incentives to encourage investment in value-added agriculture and livestock exports.

For the industrial sector, the PTI promises to establish incubators for small and medium enterprises (SMEs). A 10-year incentive plan for growth of the SMEs along with more efficient export processing zones is envisaged to boost local productivity. An export package including more efficient system of refunds is also explained in the manifesto.

To provide a boost to the services sector, PTI manifesto promises a Knowledge Economy Authority and a Digital Transformation Initiative Programme for the efficient management of infrastructure, citizen services and other e-government programmes. There is a promise to establish a regulatory framework for Open Government Data. To expand trade in services, it is proposed to increase access to international markets with a favourable visa regime and improved business outreach through Pakistan’s embassies. Special courts and dispute resolution forums are proposed to resolve intellectual property matters and copyrights in the services sub-sectors.

While it is relatively easy to talk about instruments which can bring about growth, it is harder to identify and reform those irritants which continue to stifle the economic activity. For example, a key issue faced by Pakistani startups is the fragmentation of tax revenue collection and audit system, ultimately leading to duplicity and multiplicity of taxes faced by the businesses. Pakistani SMEs continue to face one of the highest tax compliance costs in the region. It’ll be important to see how the incoming government aims to continue with or make changes to the recent tax reforms measures introduced by the PML-N government. Likewise, there are very limited options available for the reform of the energy sector. A departure from the current modus operandi being followed in the power and gas sector will require in-depth understanding of both these sectors by the incoming economic managers.

The authors are associated with Sustainable Development Policy Institute (SDPI).