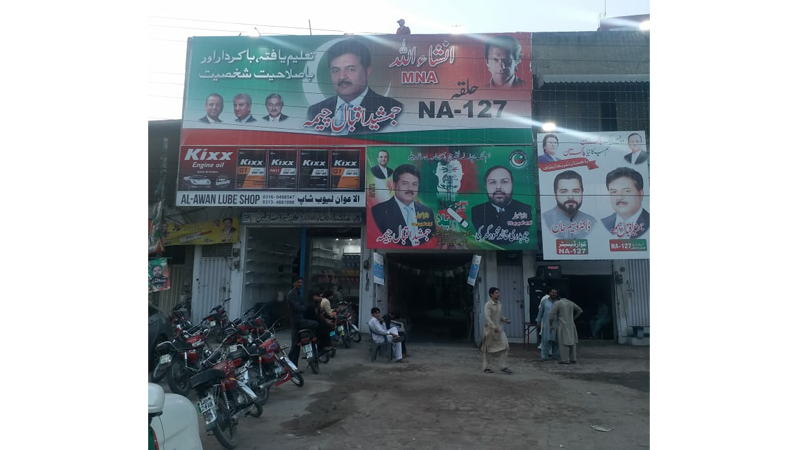 The Pakistan Muslim League-Nawaz (PML-N) is banking on its elaborate organisational structure in NA-127 to secure the seat again in the upcoming elections, while the Pakistan Tehrik-e-Insaf (PTI) is hoping that with Maryam Nawaz out of the race, it can sail through to victory without much effort.

A round of interviews in various areas suggest in spite of PTI candidate Jamshed Iqbal Cheema’s vigorous campaign, the N-League has been able to keep its vote bank in tact in this north Lahore constituency (old NA-123) that it won with a margin of 85,000 votes in 2013.

As reasons for their support, the PML-N voters refer to the massive infrastructure works undertaken by the party, including the Orange Line Metro Train (OLMT) that passes through the constituency. “Nawaz Sharif has changed the infrastructure of Lahore. My vote is for the PML-N,” says Amanat Ali, a fruit vendor who sets up stall in front of the Shalamar Gardens, while pointing his finger towards the elevated track of the mass transit rail nearby.

Our campaign was in full swing earlier when Maryam Nawaz was our opponent here, but now we are confident that we will win the seat very easily

Ijaz Cheema, brother of PTI candidate Jamshed Cheema, who is looking after the party’s campaign in NA-127

Thanks to the far-right Tehrik-e-Labbaik’s extensive electoral campaign, Faizabad dharna and the controversy surrounding the Finality of Prophethood oath seems to be a key topic of conversation in the area. However, PML-N voters see the whole episode as a conscious effort to malign the party leadership and to adversely impact their campaign. “The issue of the finality of Prophethood was politicised only to target the PML-N government. Khadim Hussain Rizvi was just a pawn,” says Mian Shehbaz, a bearded man in his 50s, who runs a garments shop in the main bazaar of Baghbanpura.

Shehbaz believes that Maryam Nawaz’s disqualification because of the conviction in the Avenfield case won’t affect the popularity of PML-N. “This area has been a stronghold of the Sharif brothers for decades. The party managed to secure this seat even during the dictatorial regime of Pervaiz Musharraf in 2002,” he says, adding, “Lion will roar once again from NA-127 on the evening of July 25.”

Although there are eight candidates in the race for NA-127, including Jamshed Iqbal Cheema of PTI, Ali Pervaiz Malik of PML-N, Engineer Zaheer Mughal of Tehreek-e-Labaik Pakistan, Chaudhry Adnan Sarwar of PPP, Chaudhry Muhammad Ilyas of All Pakistan Muslim League, Rashid Ahmad Khan of Muttahida Majlis-e-Amal, Mian Amir Abbas of Allah-o-Akbar Tehreek, the real contest will be between PML-N and PTI candidates.

This year, in a last minute decision, Maryam Nawaz was fielded from the constituency before she got disqualified following her conviction in the Avenfield case. PPP’s Azizur Rehman Chan could get only 3,770 votes, and for the upcoming election as well, the PPP is no where to found in the constituency. Earlier, Maryam’s name was floating in the press as PML-N candidate in NA-125, old NA-120 from where PML-N chief Nawaz Sharif has contested multiple elections.

Ali Pervaiz Malik, who was earlier covering for Maryam, has now been granted the PML-N’s symbol ‘lion’, after he agreed to bear the cost of printing of new ballot papers, according to the Election Commission of Pakistan (ECP) rules.

Sitting in her office at the PML-N central office in NA-127 in Singhpura area alongside GT Road, Kanwal Liaqat, the PML-N woman wing (Lahore chapter) general secretary who is in charge of the campaign here, says that the party’s machinery in NA-127 is one of its most organised in the city. “We have organizational structures not just at the UC level but also at the ward level,” she says, adding that the party’s Lahore chapter presidents, Pervaiz Malik and Shiasta Pervaiz Malik, hail from the constituency. “They have worked tirelessly for the party during the last decade. The central hierarchy of the party doesn’t need to work here as we have party organisations at the grassroots level, and we’re campaigning for 12 hours every day to mobilise our workers,” Kanwal says. 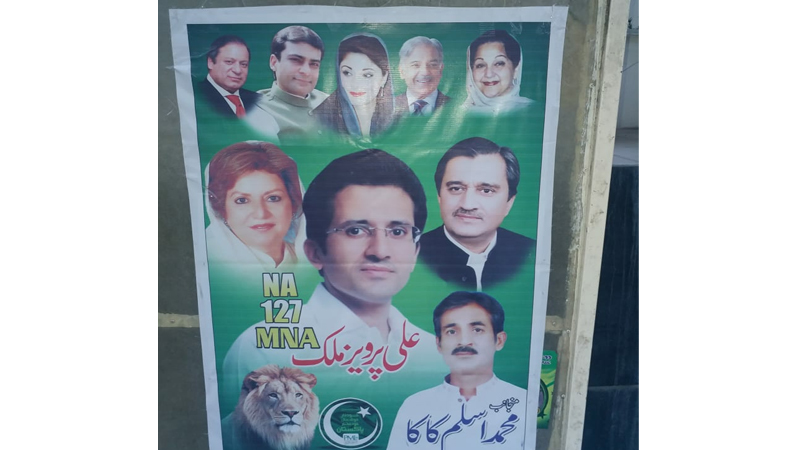 The PTI camp is confident that the seat is well within reach with Maryam Nawaz out of the race.

Ijaz Cheema, brother of PTI candidate Jamshed Cheema, is looking after the party’s campaign in NA-127.

Historic significance of the constituency

PPP founder and former Prime Minister Zulfikar Ali Bhutto contested the 1970 election from the constituency. Revolutionary poet Habib Jalib and the son of Allama Muhammad Iqbal, Justice (retd) Javed Iqbal have also contested elections from here.
Makhdoom Javed Hashmi, the then president of PML-N, won an election from here in 2002, when the PML-N was almost obliterated from the city. In 2008 elections, the seat was again won by Hashmi who vacated it to retain his Multan seat. In the bypoll, Pervaiz Malik of PML-N won the seat. He remained the PML-N candidate in 2013 as well, when he won the seat with a huge margin of around 85,000 votes.

Speaking to Daily Times at the PTI central office in NA-127 in front of the University of Engineering and Technology main campus, he says, “Our campaign was in full swing earlier when Maryam Nawaz was our opponent here, but now we are confident that we will win the seat very easily. People of the constituency don’t like Malik Pervaiz because he patronises gangsters in the area.”

Further, Cheema accuses Khwaja Imran Nazir, PML-N candidate in one of the PP seats here, of indulging in pre-poll rigging. He says Nazir, a former minister of Primary and Secondary Healthcare, is using public officials from the department to run his campaign in PP-153.

Pervaiz Malik and Shaista Pervaiz have worked tirelessly for the party during the last decade. The central leadership doesn’t need to work here as we have party organisations at the grassroots level, and we’re campaigning for 12 hours every day to mobilise our workers

Kanwal Liaqat, the PML-N woman wing (Lahore chapter) general secretary who is in charge of the campaign

Like other seats in the city, the far-right TLP has emerged as the third force in NA-127 as well. It is banking on the extensive network of barelvi seminaries in northern areas of the city to woo disenchanted youngsters who believe that neither PML-N nor PTI have delivered much in their tenures. Explaining his support for the TLP, Malik Muhammad Ali,a resident of Bhogiwal Road, says that he will vote for the party because the PML-N couldn’t do much for the residents during its five-year term. “Our area gets inundated whenever it rains here in the monsoon season,” he says. Regarding Imran Khan, he says that he failed miserably to deliver much in the Khyber Pukhtunkhwa. He believes that voting for the TLP will be good for his hereafter as well.

The volunteers of the TLP can be seen campaigning rigorously in China Scheme, Bhogiwal Road and Madhu Lal Hussain areas.