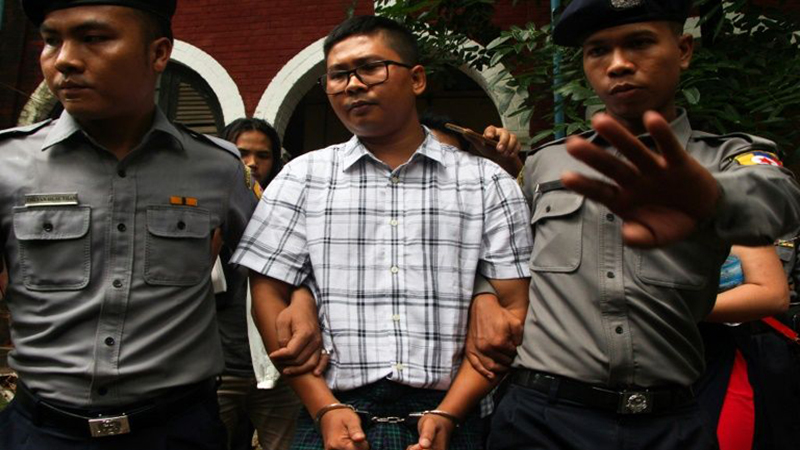 One of two Reuters journalists charged in Myanmar with breaking a state secrets law while reporting on the Rohingya crisis protested his innocence Monday on the first day of a trial that has provoked global condemnation.

More than 700,000 of the stateless Muslim minority have fled the western state in response to a campaign that the US and UN have described as ethnic cleansing.

The reporters have spent seven months behind bars during pre-trial hearings but were informed last week that the case would go ahead. If convicted, they face up to 14 years in jail.

Wa Lone, the first to testify, told the court that he had followed standard reporting procedures and not broken any laws.

“I reported the news as I saw the facts and I reported right,” he said.

At the time of their arrest the journalists had been investigating the massacre of 10 Rohingya Muslims in Rakhine a week after militants attacked police posts on August 25, triggering a brutal response from police and troops.

“I understood that the security forces who were on duty in that area were responsible for that case. That’s why I tried to meet the police who were on duty,” he told the court.

“I wanted to confirm that situation. I did not try to meet them to take any documents.”

The military acknowledged the massacre after the journalists were arrested and rare convictions were handed down for seven soldiers.

Reuters says their reporters have done nothing wrong. It has pointed to the pre-trial testimony of a policeman who said he was ordered to incriminate them.

Rights groups have slammed the case as an attempt to stifle reporting on the crisis and have called for their release.

The trial has made international headlines and has sparked criticism of the administration of Aung San Suu Kyi, who came to power in 2016 after decades of military rule.

Reuters hired prominent rights attorney Amal Clooney to join the legal team, although she has not appeared in court.

The north of Rakhine state has largely been sealed off from independent journalists and observers since August last year.

Hundreds of Rohingya villages were burned to the ground in the crackdown and refugees arriving in Bangladeshi camps have described widespread murder, rape and torture.

The military insists its campaign was a legitimate response to attacks that left about a dozen border guard police dead, but international pressure for accountability is building.

Ahead of the announcement Myanmar says it sacked one of them, Major General Maung Maung Soe, the former head of the western command in Rakhine.