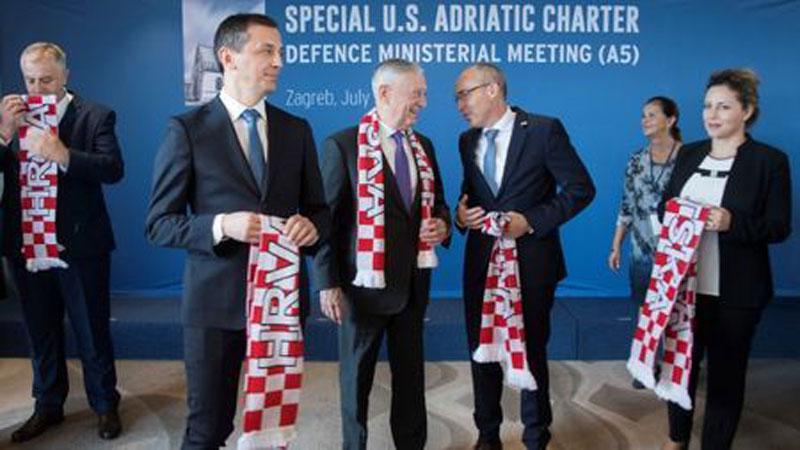 Nobody at the meeting said the word “Russia” while the cameras were rolling. But Moscow was clearly on everyone’s mind as US Defense Secretary Jim Mattis sat down on Friday in Croatia with Balkan defence chiefs who accuse Russia of trying to sow instability and division in this corner of Europe.

“We are not naive and we are keenly aware that some elsewhere would wish to see us fail in our endeavours here today,” Mattis said in his opening remarks at the meeting, before reporters were escorted out of the room.

“Those that seek to divide us for their own reasons will not enjoy our dedication to working together.”

The group is currently chaired by Montenegro, which joined NATO last year in defiance of Moscow after accusing Russian spies of orchestrating an attempted coup to derail the accession. Moscow called the accusations anti-Russian hysteria.

Among the Balkan leaders attending was the defence chief from Macedonia, which was formally invited this week by NATO to begin accession talks. That came despite opposition from Russia, which sees its influence in the region diminishing.

Moscow’s ambassador to Skopje has criticised Macedonia’s ambitions to join NATO, saying it could become “a legitimate target” if relations between NATO and Russia deteriorate further.

Asked after the meeting about her concerns, Macedonia’s Defence Minister Radmila Shekjerinska-Jankovska said her country was working to ensure only Macedonians decide the path forward – “and that no malign influences interfere.”

“We wish for good cooperation with Russia. But strategic decisions are ours to make,” she told a news conference.

Michael Carpenter, a former senior Pentagon official and an expert on eastern European security, said Mattis’ visit came at a critical time for the Western Balkans “as Russia ramps up its interference in Bosnia, Macedonia, Montenegro, and Serbia.”

The invitation to admit Macedonia will leave only Serbia and the Serb-run part of Bosnia open to Russian influence in the Balkans.

Serbia’s representative did not show up to Friday’s event in Croatia’s capital Zagreb, leaving an empty seat at the hotel conference room table where defence chiefs from eight other nations gathered.

“Why he didn’t come? You should ask the Republic of Serbia,” said Croatia’s Defence Minister Damir Krsticevic, speaking through a translator.

The talks came at a delicate moment in US-Russia relations, just days ahead of a summit between US President Donald Trump and Russian President Vladimir Putin in Helsinki on Monday.

Trump has touted that meeting as an opportunity to reduce tensions, inflamed by Russia’s annexation of the Crimea peninsula from Ukraine in 2014, its military backing of Syrian President Bashar al-Assad, which turned the tide of the Syrian civil war in 2015, and accusations of Russian meddling in the 2016 US election. Trump called Putin a “competitor” and “not my enemy” during the NATO summit on Thursday, prompting lawmakers from both US political parties to harden their warnings about the threat from Moscow.

“Putin is not America’s friend, nor merely a competitor. Putin is America’s enemy — not because we wish it so, but because he has chosen to be,” Republican Senator John McCain said.

Derek Chollet, another former Pentagon official now at the German Marshall Fund, applauded Mattis’ engagement through the US-Adriatic Charter initiative, known as the A5. “US engagement with the A5 has been positive … but can be easily overtaken by a larger effort to become closer to and accommodate Russia, which Trump seems intent on doing,” Chollet said.