* As you enter the Lahore Fort close to the vicinity of Alamgiri Gate and Musamam Darwaza is the Barood Khana, which according to a plaque placed on it, was built during the British rule here 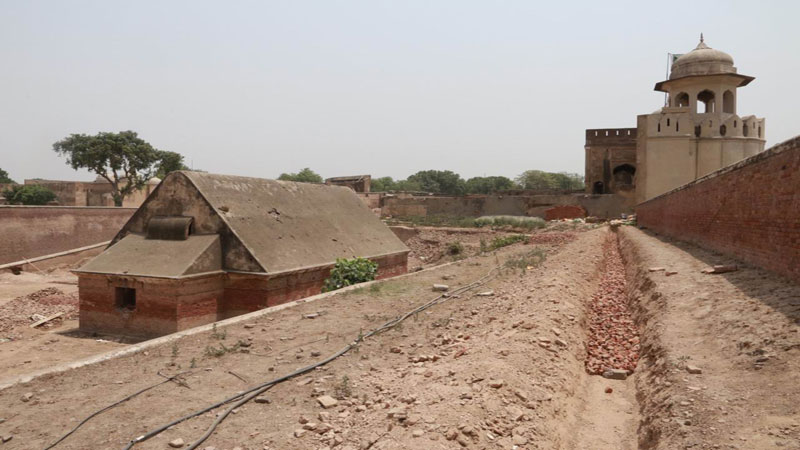 Lahore Fort is one of the most popular tourist attractions in Pakistan. The Lahore Fort was inscribed as a UNESCO World Heritage Site in 1981 and I can claim that Lahore Fort is one of the astonishing structures of its kind in the world having the world’s largest picture wall and the majestic mirror palace. As many times you get inside Lahore fort you will surely find something new to mesmerize you. It is one of the Monuments in the world that give you a history of the seasons it has witnessed and details of the Mughals, Sikhs and British who ruled this region. Today, I will be taking you to another masterpiece revealed inside the Lahore Fort which was hidden under loads of debris since decades and no one could ever imagine what was buried below those piles.

This building is the Barood Khana of Lahore Fort, which means an arsenal depot. I can imagine that you must be thinking where it is inside the Fort, and I am sure that like many of us you also might not have heard about it earlier. Since partition it was hidden and later with the passage of time it got buried under loads of debris and waste. The building was abandoned and was suffering through serious neglect and damage when the walled city of Lahore authority started removing almost thousands of cubic feet of debris from it and finally the wonder was revealed.

As you enter the Lahore Fort close to the vicinity of Alamgiri Gate and Musamam Darwaza is the Barood Khana, which according to a plaque placed on it, was built during the British rule here. Let me tell you an interesting thing about the arsenal depots in those times. Many of the mosques and havelis were converted into the arsenal depots by the Sikhs and British which included Mariam Zamani Mosque and Haveli of Mian Yousaf Sallahudin. These places became popular as Barood Khana Masjid and Haveli Barood Khana and the surrounding bazaar also got named as Barood Khana bazaar and it is sill known by the same name. Well, these are the interesting facts of the past which the city observed and now we read in historic accounts. 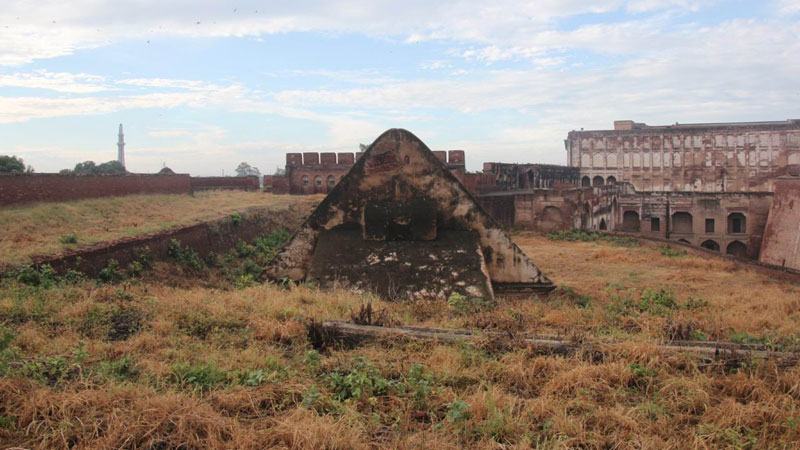 Let us come back to this building, which is recently revealed, Barood Khana inside the grand Lahore Fort. This building was built in 1857 during British era, for the purpose of storing gun powders. In this depot, British had been storing the gun powders as well as all kinds of arsenal. According to historic map of Lahore Fort, it was found that there was a garden with arcades around before construction of Barood Khana. The structure was the part of Alamgiri Gate and Musamam Darwaza of Lahore Fort and later during the British era a road was constructed in between to connect the Hathi Gate with Diwan-e-Aam. Before road it was a complex and this same road we use today to enter in the Lahore Fort.

According to the documentation of this building, the internal dimensions of Barood Khana are 42 feet and forms like a tunnel. The interesting thing is that the internal and external dimensions of the building vary and that a technique in its construction. What we see today is that Barood Khana is a single story building having a structure of brick masonry and lime mortars. There was waist high wild plantation growth around the building which covered it too. The vegetation around the building became a reason of seepage of rain water and consequently, loosened the soil underneath and caused cracks in building.

The entire structure of the Barood Khana was facing threat and damages and the building also had bulging plaster, missing or dismantled brick masonry, missing cornices, damages in wooden doors and ventilators, blackish surface and graffiti inside the building. The doors and windows were seen totally injured because of aging factor, termites, others woodworms and especially because it was never paid any attention in the past. I got to know that a bulk of renders from wall and ceiling were already been lost while some of them are still intact. Most of the damages to the interior and exterior spaces are due to neglect, lack of maintenance and management of the site. The majority of the threats to the interior elements are directly related with the natural and man-made causes and the worst part of the threats to exterior around the structure is affected by biological growth and atmosphere pollution. If you go inside this building, you will see the marks of arsenal on the walls and ceilings. 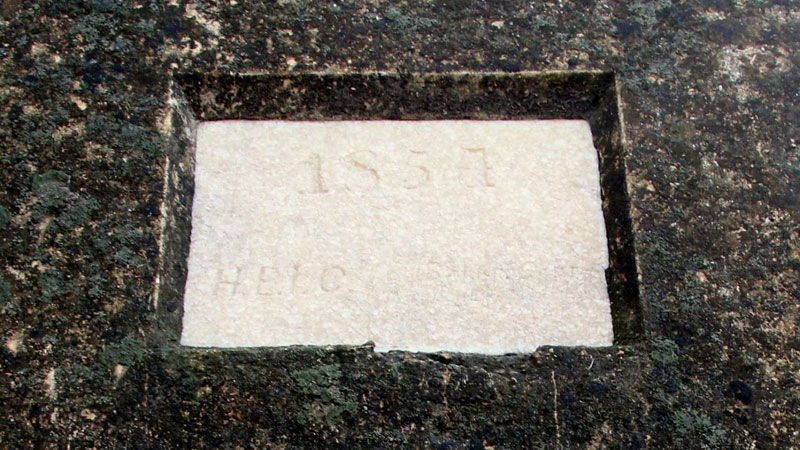 Now the Walled City of Lahore authority has started the conservation of this building and I am sure it will be restored to its original glory and will be opened for the public. The strange part is that despite being a part of Lahore Fort and a building of famous British era there is no literature found on Barood Khana and nothing so far is written on it. The monument is a witness of the incomparable use of spaces, valued formation and application of geometric proportions during the British era. It is completely a sole combination of history, culture and architecture and I wonder how could we ignore it? I searched a lot in books and internet about it but nothing was written on this building and this shows that how neglected and hidden it was from the people. Another sad part is that in the previous conservation schemes for the Lahore fort, the Barood Khana could not get the required attention as a result this marvelous monument lost its historic function, and diluted architectural appearance, well I guess that’s a dilemma with most of the monuments we have here in Pakistan.

The conservation of the building is in process and had started with the cleaning of the building and removing tons of debris and wild plantation followed by the documentation process. This building will be restored by September this year and it is planned that it will be opened for the public and tourists. In my opinion it would be amazing if it is turned into an arsenal museum displaying the arms and ammunition of the past and British era. The gallery like look of the building can serve well as a museum. It will be linked with the Sheesh Mahal area through the British era bridge which we see in Lahore Fort and will also be illuminated. I must say it will be another marvel inside the fort.