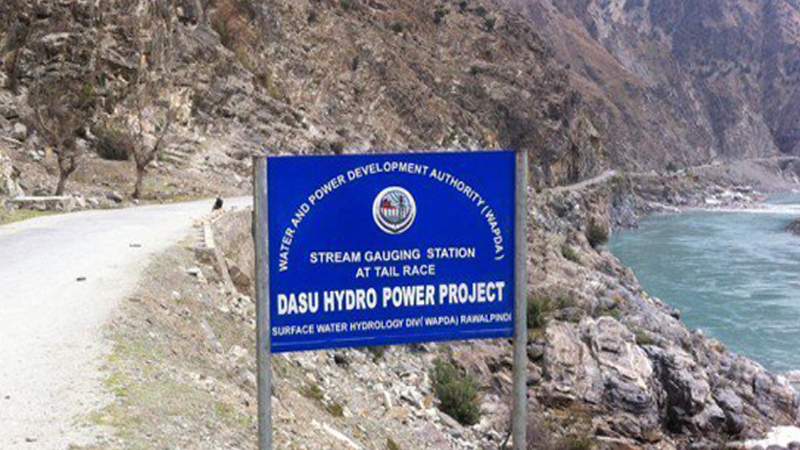 LAHORE: Due to illegal constructions and encroachments at the proposed dam site and sluggishness in the land acquiring process by the provincial government of Khyber Pakhtunkhwa and the Water and Power Development Authority (WAPDA), the ground-breaking of Dasu Hydropower Project is still in limbo, Daily Times has learnt reliably.

According to sources, the land around the proposed site which had to be acquired by WAPDA through the provincial government for the construction of the dam has not yet been acquired as the November 2018 deadline by the World Bank approaches fast. Sources said that despite having received a reasonable fraction of funds from the loans approved for the purpose, the government has failed to kick-start the construction of one of the most important and much-needed power project.

The Dasu Hydropower Project is to be constructed about seven kilometres north of Dasu town in district Kohistan of KP province. The 242-metre-high dam with gross storage capacity of 1,410 million cubic meters and live storage capacity of 820 million cubic meters is supposed to generate 4,320 MW of electricity. The water storage facility, once built, will be able to irrigate 15.88 million hectares of land.

Sources revealed that for the development and construction of Dasu Hydropower Project-I, the World Bank had approved a financing package from the International Development Association (IDA) on June 10, 2014. Under an agreement between the Government of Pakistan, WAPDA and the World Bank, a credit of US$ 588.4 million was signed on August 25, 2014 along with an IDA Partial Credit Guarantee (PCG) of US$ 460 million. The loan agreement was effective from November 20, 2014. Another agreement for financing of up to Rs 144 billion was signed with Habib Bank Limited (HBL) and a consortium of seven local commercial banks in March, 2017. The first tranche of Rs 25 billion was received in May 2017. Another agreement of US$ 350 million was signed with Credit Suisse Bank in June 2017 and the first tranche of US$ 188 million was received on June 30, 2017.

Sources informed Daily Times that the project area is totally mountainous and the one of the least developed regions in Pakistan. The population in the area belongs to many tribes who migrate up and down the hills during different seasons for their livelihoods. The land in the area is communally owned and land rights are traditionally recognized by tribal and customary laws.

Sources said that due to non-availability of land records, WAPDA had established a separate ‘Land Acquisition & Assessment Unit’ under the control of deputy collector (DC) Kohistan who was responsible for preparation of the revenue record. The Executive Committee of National Economic Council (ECNEC) had approved the rates of the lands to be acquired for the dam but the locals are demanding higher returns and creating hurdles by doing fresh constructions and encroaching upon the areas close to the project site, with the DC office still unable to resolve the matter with the locals.

Sources also expressed distress over disbanding the Grievances Redressal Plan (GRP) introduced by WAPDA in order to deal with the grievances and disputes regarding lack of land records, errors in establishing inventory of the losses, exclusion of legitimate affected households due to migration to higher elevations, gaps in the legal and policy framework regarding socially and legally identified owners of land, lack of adequate safety in the construction areas, pollution, noise, traffic hazards and other similar issues.

As per information acquired from WAPDA, out of the 2,029 acre priority area land required for the preparatory and main civil works, about 634 acres of land had already been acquired while the remaining land was to be acquired by February 2018. A sum of Rs 1.57 billion has been distributed among the project affectees so far.

Javed Akhtar, general manager and project director of Dasu Hydropower Project, told Daily Times that under the land acquisition laws, provincial government, not WAPDA, was responsible for acquisition of the land. “There is no government land available in the area. It is a mountainous area and people own all the land. Despite the enforcement of Section 4, under which government through the district collector acquires land for the public purpose, people are carrying out constructions in the area which is a major hindrance to the launch of development work of the dam. Revenue record of the area is not available with the provincial government, which is also a big issue. The government is offering 25% more to the affectees as compensation for acquiring the land than what was given for Diamer Bhasha Dam but people are still not satisfied,” he said.

“WAPDA had no land for the purpose until 2017, but now we have acquired some land and the remaining will be acquired soon with the help of the provincial government,” he said. To a question about delays in launch of the project and the approaching loan deadlines, he said, “We have no issue with the deadline of the loan from the World Bank, as we keep informing them about the situation on regular basis. The November 2018 deadline can be extended.”