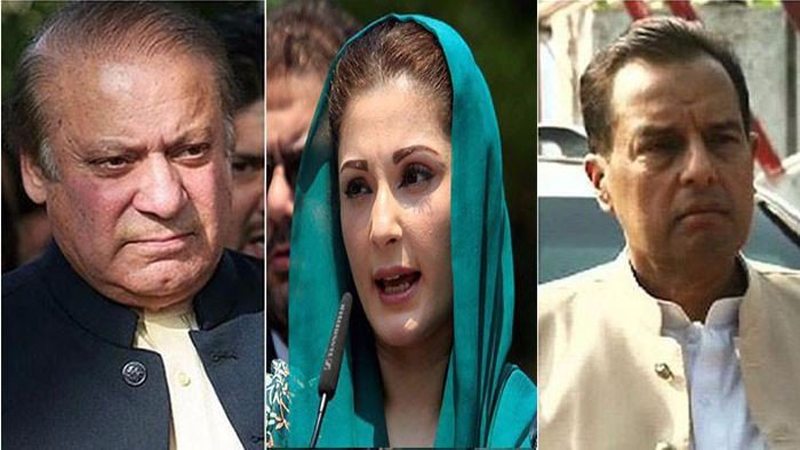 The court judge Muhammad Bashir also ordered the federal government to confiscate the Avenfield apartments, which were under under the ownership of Nawaz Sharif since 1993.

The court awarded 7 year imprisonment to Maryam Nawaz along with two million pound fine. The court also sentenced Maryam to one year in prison for submitting false documents in court.

It awarded one year RI to Captain (retd) Safdar.

The court announced its reserved verdict at 4:40 pm. Earlier, in the morning, the court dismissed Nawaz Sharif and Maryam Nawaz’s application filed on Thursday for a seven-day delay in the announcement of the verdict in the Avenfield corruption reference in light of Begum Kulsoom Nawaz’s health.
Ahead of verdict’s announcement, the district administration imposed Section 144 in the capital to discourage mass gatherings.

During the announcement of the verdict, except PML-N leader Asif Kirmani and former minister Dr Tariq Fazal Chaudhry, no other prominent leader of PML-N was present in the court.
The security officials barred the entry of dozens of PML-N workers in the judicial complex. About 1500 police personnel and 500 Rangers personnel, besides other personnel of the law enforcement agencies were deployed in and around the accountability court complex to avert any untoward incident ahead of the verdict.

Following the verdict, Maryam and Safdar stand disqualified from contesting the July 25 general election from Lahore and Mansehra, respectively.

According to media reports, Nawaz and Maryam have appeared before the court around 100 times.  About 119 hearings of the Avenfield reference were held.

Nawaz Sharif family’s four member- Nawaz, Maryam, Hassan and Hussain- are in London, while retired Captain Safdar is in Pakistan, but he was not present in the court.

Nawaz Sharif and his Maryam have been in London since last year, when Begum Kulsoom Nawaz was diagnosed with cancer. She was recently placed on a ventilator and her condition remains more or less unchanged.

After Judge Bashir reached the accountability court on Friday morning, Additional Deputy Prosecutor General NAB Sardar Muzaffar Abbas opposed Nawaz and Maryam’s application, saying: “At a stage when the court concludes the trial and fixes a date for the final announcement, the accused cannot file application for any relief.”

The defence counsel, Amjad Pervez, argued that “There is a legal requirement that the accused person should be summoned at the time of announcement of judgment, and in this case Mr Sharif and his daughter Maryam Nawaz both are ready to attend proceedings, but because of Kulsoom Nawaz’s illness, they requested that the judgment may be postponed for a few days.”
When the lawyer asked when decision on the application would be announced, Judge Bashir replied, “Give me an hour at least.” Subsequently, the court reserved its decision on the application for an hour, until 11am.

At 11am, the court rejected the application for a delay, and said the verdict would be announced at 12:30pm. Later it was pushed to 2:30 pm and then 3:00 pm. At 3:00 pm, the court pushed it to 3:30 and then to4: 30 pm, stating that some photocopies were being made, which were taking time.
The Avenfield reference ─ which pertains to the purchase of four flats in Avenfield House, Park Lane, London ─ was among those filed by the National Accountability Bureau (NAB) against the former premier and his children on the Supreme Court’s orders in its landmark July 28, 2017 Panamagate verdict which disqualified Sharif.

Besides Nawaz, Maryam and her husband Captain Safdar, NAB had also nominated Hussain Nawaz and Hassan Nawaz — Sharif’s sons — as accused in all three SC-ordered corruption references.
NAB prosecutor had stated before the accountability court that Nawaz Sharif had acquired the four flats. Sharif family insisted that they had purchased the apartments through ‘legitimate’ financial resources.
They, however, remained unable to disclose those resources before the accountability court or the Supreme Court.

The apex court had directed the accountability court to conclude proceedings within six months and appointed Justice Ijazul Ahsan — who was a member of the bench that heard Panama Papers case — as a “supervisory judge” for the trial.

Proceeding in the Avenfield reference commenced in September and the accountability court indicted Nawaz, Maryam and Safdar on October 19.

According to the JIT report submitted in the Panamagate case, the Sharifs have given contradictory statements about their London flats and found that the flats actually belonged to them since 1993.
The report said Hassan Nawaz had contradicted the statement of his brother Hussain Nawaz about the Avenfield apartments, who had earlier stated that only apartment No 17 was in his possession in 1994.
Contrarily, Hassan confirmed that three Avenfield apartments (No 16, 16A and 17) were already in possession of Hussain when he had arrived in London in 1994, while they got the possession of the fourth apartment (17A) in the next six months.

Nawaz had told the JIT that he usually stayed in apartment No 16 (Avenfield) whenever he visited London. The prosecution produced 21 witnesses in the Avenfield reference, including star witness Wajid Zia, the head of the joint investigation team (JIT) which probed the Panamgate case, Director General NAB Zahir Shah, British forensic expert Robert William Radley and solicitor Akhtar Riaz Raja, who is Zia’s cousin, among others.
In May, 2018, Nawaz, his daughter and son-in-law recorded their statements under Section 342 of the Criminal Procedure Code (CrPC) after which the court invited final arguments from the prosecution and the defence counsel.

In his final arguments in the Avenfield reference, Amjad Pervez, counsel for Maryam and Safdar had stated rthat the Supreme Court in its May 5 order had empowered the JIT to engage experts but the JIT hired Raja, who was a solicitor.

He argued that there is nothing on record as to why a solicitor’s services were required to send an email and there is no plausible explanation why Radley couldn’t be engaged directly or through foreign office.
He pointed out that Raja doesn’t have any personal knowledge of the events and his commentary is mere opinion. In addition, he said, it is an admitted fact that Raja “congratulated” Zia following his appointment as JIT head.

Concluding his case, Amjad Pervez had argued that the JIT deliberately ignored the witnesses such as management of Minerva Services, which was the registered director of Nielson and Nescol off-shore companies that owned the Avenfield apartments.

He claimed that the government of British Virgin Island (BVI) had rejected the request for Mutual Legal Assistance (MLA) sent by the JIT seeking information regarding the London apartments but the investigation team concealed this information in the JIT report.

He argued that the evidence which has been brought on the court’s record was “third-hand” evidence since these were old documents and were already available even before the existence of the JIT.

He further argued that the prosecution had miserably failed to bring “an iota of evidence to substantiate whether Maryam Nawaz or retired Capt Safdar were beneficial owner of the London apartments.”

Before reserving the verdict, the court had directed the accused persons to ensure their presence on July 6, when the judgement in the Avenfield reference was set to be announced.