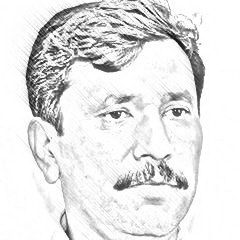 Anarchy is the right word to describe the nature of threat the authorities are trying to counter in Punjab by calling Rangers in. The province is not in state of turbulence. Lahore does not find it difficult to collect revenues from any part of the province, at least.

The Punjab government fears presence of terrorists but is not sure its Police can handle the problem anymore. Punjab Police is as effective in handling ‘socially alienated’ elements as its counterparts in other provinces, but hardcore terrorists are ones it has been not trained for. Quite understandably, Punjab does not feel that shy to share its ‘worries’ with Centre as Sindh or KP does.

After suicide attack in Sehwan, Centre is mounting pressure on Sindh to extend Rangers’ sway beyond Karachi as well. How to tackle separatism in Balochistan is yet another riddle that has been left untouched by 21st amendment, for military courts can’t handle the cases relating ethnic separatist groups operating in the province. (It is the point which is causing deadlock over extension of military courts).

What should have been categorized as crime and corruption and dealt with policing and administrative measures has now transformed itself into a monster. If courts and administrative system fails to deliver justice, the Law of Jungle becomes the only arbiter. Violence, thus, becomes natural. It is phenomenon that provincial governments have failed to tackle. No justice system succeeds but only when rest of institutions are put into its aid.

The enemies from around have taken due advantage of the cleavages left so open and wide since Constitutional reforms of 2010 which made provinces autonomous and prosperous, both. It was done through deletion of concurrent list and enhancing provincial shares in federal divisible pool. But, quite unfortunately, Centre could not secure provinces’ obligation to keep the spirit of devolution while constituting district governments.

Just imagine the times when Deputy Commissioners were made answerable to district Nazims. Even a Councilor could approach him and talk to him with a sense of authority. Compare with what have been delivered by Sindh and Punjab. The task of infrastructure development and education has been handed over back to the Deputy Commissioners, who are not answerable to district governments as well. It is yet to be seen how long Police, which was previously under local governments, now evade the authority of DCs too.

After having transformed Pakistan into virtually a theocratic state through certain religiously inspired provisions of the Constitution, more divisive step was taken by making provinces autonomous but blocking the way of new provinces. Ethnic profiling of NWFP, whereby it was renamed as Khyber-Pakhtunkhwa, cost lives of seven peaceful protesters demanding Hazara province in Abbottabad.

The centre devolving powers but remaining indifferent to the situation whereby people at grassroots level remain weak and paralyzed as ever, whose interest the whole melodrama of devolution has served?

Political solution would have suggested more powerful local governments attending to socio-economic growth and taking care of law and order as well. It is just an over extension of provincial mandates that they look towards the Pak Army for help. If security has become the first problem to tackle with, its answer lies in empowering the people through local governments, if not the new provinces.

Militancy doesn’t just represent the uneven socio-economic structure of the society we have — thanks to legacies of British India — but also the income inequalities widening rapidly since Musharraf era. Introduction of capitalism sans accountability has a lot to do with the uncertainties of today. Just think about the danger of providing safe passage to the illegally-earned money to take foreign route due to Protection of Economic Reforms Act 1992.

Civilian regimes have nothing to offer to the masses but by the means of borrowing from internal and external sources. No road and building is without a cost involving interest rates. Leaving health and education to private interests just speaks loudly about attitudes and orientation of the lot in power.

Regional trade could have been an answer to address the vows of lower and middle income groups, for the same would have brought prices of commodities down and lowered the cost of doing business, but the same was discouraged by the agriculturalist lobby. Don’t expect a democracy to have open border with India given the ‘sensitivities’ of the feudal clan with free trade.

Privatization of loss-earning government-run businesses should have accompanied the economic liberalization drive but the same was blocked by the PPP because it meant affecting its vote bank in Sindh.

The civilian regimes have not bothered to expand tax base but unscrupulously raised GST, which made energy sector as the major source of their revenues. Not only economic downturn could not be arrested but also it hurt purchasing power of lower and middle income groups-commodities became costly and the cost of doing business increased (think about small farmers of northern and southern Punjab, who use diesel-driven tube wells to water their crops).

The civilian regimes borrowed funds from international financial institutions agreeing to slash subsidies so as to overcome budget deficit. They could have, alternatively, turned to austerity measures to provide relief to the people. All happened very opposite: devolved ministries, after multiplying by four, as they landed into their concerned provinces, were revived back and some with very ridiculous functions.

The situation is ridiculously odd as far as the signatories to the 18th Constitutional amendment are concerned. PPP has lost Sindh to lawlessness, PML-N is on edge on account of corruption. ANP no more rules the province it had profiled and projected as ethnic. Even PTI is not in comfort zone given uncertainties involved with the set means of political change.

The center needs socio-political stability as a means to peace and strong local governments can be a good means to this end so as to take care of porous borders effectively. Provinces have passed on to it the burden of law and order as well only because they don’t to want to devolve power down to the grassroots level. By reviving Commissionerate system, retaining colonial era penal code, the doors of change have been effectively locked.

Even the general elections can’t weaken the grip of reactionary regime — bureaucracy is all party to it — over state. The tow party system with sectarian and ethnic strings is that a monster to tackle with. But to the whole wisdom of ethnics and their right-leaning comrades, the very old riddle is worth consideration: once army is out of barracks it is not possible for civil regimes to call it back, half the way.