Action against begging mafia must be taken now. Enough is enough 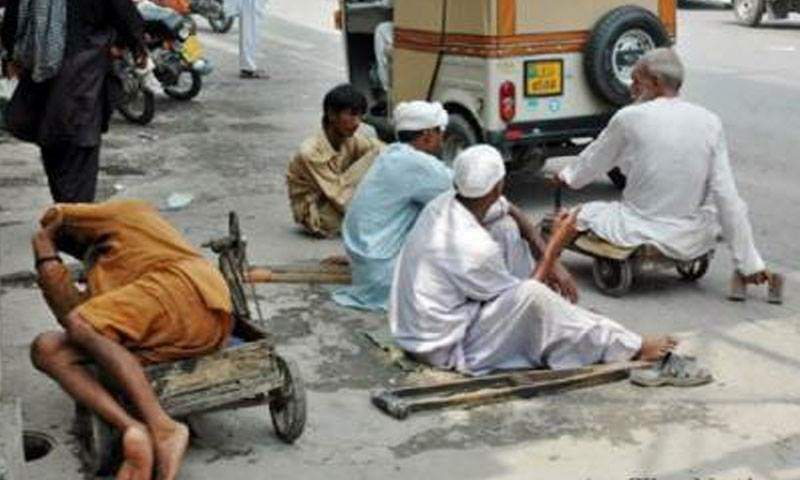 Begging is one of the most important problems in Pakistan, which has not been taken seriously. Begging is growing issue that gives rise to different main issues, such as street crime, theft, robbery, repression of the poor, violence and exploitation. Pakistan faces street begging at an alarming rate.

Begging is asking for supplication, it is also one of the oldest professions on earth such as prostitution, but other nations have taken some serious measures to reduce it, while in Pakistan this tendency to beg is increasing every day.

According to investigation, begging is an organised crime in Pakistan and, according to contemporary estimates, there are between two and twenty-five million beggars in Pakistan. There are several causes of begging that allow people to beg.

Begging is a necessary income supplement to survive at some level related to basic needs such as food or drugs. This is a complex relationship between poverty, homelessness, substance abuse, mental illness, unemployment and crime. All these factors somehow result in begging so that they can generate income for survival.

Begging is so common in all major cities and beggars are found at each roundabout, on the pavement, in front of the mosque and the main roads asking for alms. It has become a profession with a larger industry. Begging prevails also because of our social configuration. Two things that drive this industry are the “shock value” and the religious connotations of assistance.

In our society, begging has traditionally been tolerated and even encouraged because those people give them money to obtain religious merit and earn money, but we have forgotten that these people are professionals and living without doing anything is the sole purpose of their lives.

Not only in Pakistan, but also in other countries of South Asia, people tend to provide charity to the poor, and because of that tendency, begging has become quite unbridled as a portion of the people is more than happy to give money to beggars, especially children. However, this happens because the state does not have enough resources to provide for the poor and needy. This allows them to plead their survival needs.

Poverty is the main cause of begging that has forced hundreds of people to commit suicide, forced women to sell their children and young people to leave their homes and start begging.

According to a survey, a large number of people living below the poverty line earn less than Rs 4000 per month, which makes it very difficult for a person to meet their needs. On the other hand, a street beggar is earning more than a normal person and it is also an easy source of money.

They claim that they have to pay a sum to the ring leaders or the police in the begging areas. According to Pakistan law, begging can take you to jail for three years. But that rarely happens here according to the lawyers. Also, parents whose children are begging can be arrested and jailed for three years. The High Court of Lahore in 2011 ruled that professional begging should be discouraged.

The begging culture is not as simple as it seems; now there is a whole mafia and a series of crimes is also related to it. They even cheat innocent women and steal them. Also, the beggar children are mostly those who were first abducted by this mafia, and then turned into a hideous appearance or disabilities that can be a convenient tool to extort money from wherever they can.

Although begging is illegal in Pakistan, according to the West Pakistan Loitering Ordinance of 1958, this law remains largely unforced as a massive increase in the number of beggars from past decades.

There are 1.2 million children on the streets of major cities and the urban center of Pakistan. This is just the number of children who beg, apart from children there are a number of beggars who are mostly disabled or claim to be disabled.

According to the Office of Child Welfare and Protection, the Office has provided for 39,270 poor and neglected children in six years. Undoubtedly, the professional beggars here in Pakistan are begging of their own choice and are the real culprits, but the beggar children in the city begin involuntarily.

According to the research of the Asian Human Rights Commission (AHRC) in Pakistan, there are 1.2 million children on the streets of major cities and the urban center of Pakistan. This is just the number of children who beg, apart from children there are a number of beggars who are mostly disabled or claim to be disabled. Their lives are being controlled by a huge network of mafia beggars who also assign their territory where they have to beg. They are being trained professionally and tortured inhumanly, and if someone only asks for their network or teachers, they die of fear.

These mafia leaders actually take an oath from them to keep their name a secret because most of their heads are known and influential people in society.

Children do not run away just because their families are poor, many of them are abused. Many children flee because they see violence in their homes. NGOs can do a lot. The long-term sustainability of such interventions depends on government help.

Begging is undoubtedly the result of poverty. The average daily wages range between Rs 400 and Rs 500 that they give to their teachers. Most of these beggars were children who did not even wear adequate rags and shoes.

In short, begging is influencing a large number of people in our societies, not only beggars but also those affected by these crimes related to begging. This creates a poor image of society and the begging of the mafia is getting stronger every day because nobody has taken this issue seriously, nor the law and the enforcement agencies, the government and the NGOs are doing something that is only focusing on begging. There are some measures that could be taken to reduce begging.

Zakat and Sadqa are two important obligations that must be accessible to the poor and needy. The zakat system must be transparent and it is our responsibility to look up the eligibility of a receiver.

The government should take some initiatives, such as organising different workshops, training programs and skills so that they can really make a living in the future.

Begging is now one of the organised crimes and must be eliminated through serious policy formulation and planning. It needs to be eliminated from society because it is producing a dependent person that is dangerous for the development and progress of a country, since it helps in different crimes.