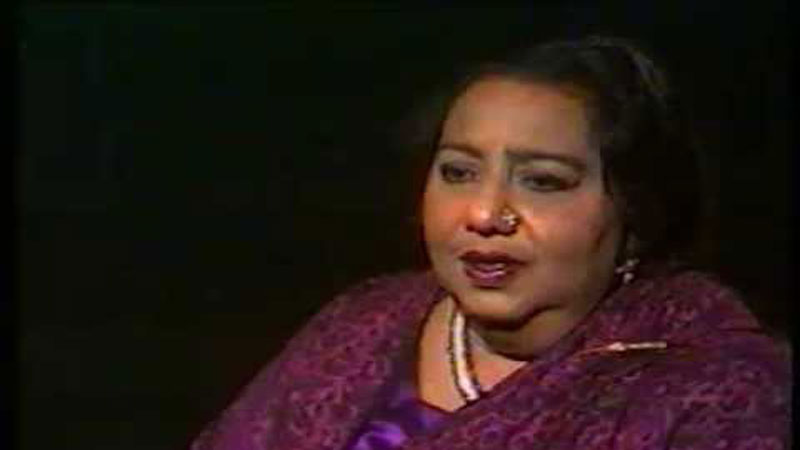 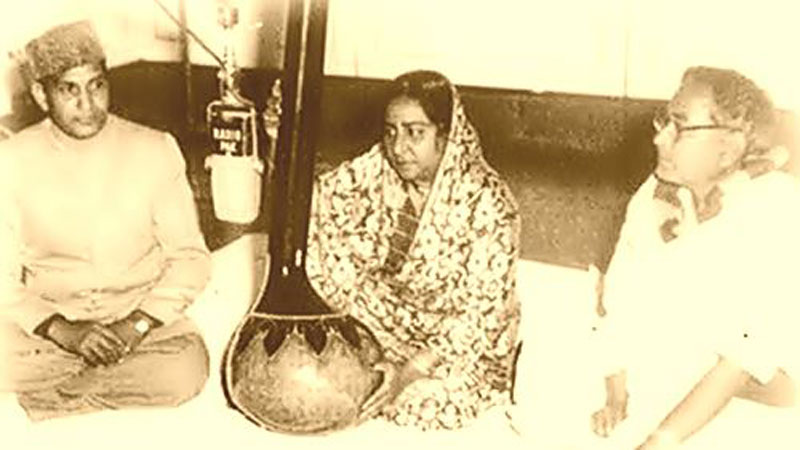 Important features as a vocalist
As a vocalist, the most important feature of Roshan Ara Begum singing was her stress on melody. She had an outstanding adroitness and control over an affluence of Raags. At a 1954 musical conference in Bombay, her renditions of Jinjhoti Thumri and Bhairvi Thumri, the Raags for which she is still considered the ultimate interpreter, astonished a group of distinguished Ustads and Pundits with her divine and soul-stirring voice. I don’t know whether singing small embellishments in her Raag rendering was due to her affiliation with Kirana Gharana or not but she was outstanding in this style. My all-time time favourite Raag rendered by her is Raag Anandi. Her Durrat (teen Taal) portion ‘Aj Hun Aye Balam Buhut Din Beete’ shall vouch for my observation. This Raag due to its construction has its limitations but the way she brings variations in ‘taans’ and ‘zamzamas’ is amazing.
Ustad Ghulam Haider Khan in his submission to a local daily comments ‘In fact if there was any comparison to be made with a contemporary of hers, it was with Ustad Bare Ghulam Ali Khan. I remember one occasion on which the two great singers happened to share a stage. It was one of Radio Lahore’s annual Jashn-e-Baharan festivals of the 1950s, and it spanned over 7 days. On the first day Ustad Bare Ghulam Ali Khan rendered his favourite Raag Malkauns with full vigour and strength, and after him Roshanara sang her own favourite Raag Shankara with zeal and aplomb. The audience was riveted by both performances; there was no agreement about whose song was superior. The next evening Roshanara was scheduled to sing first, and she picked Raag Basant. Now it was the month of March, and Lahore was drenched in the smells and colors of spring. Roshanara’s rendition of the taunting-joyous Raag seemed to dance with the elements, and was so enchanting that the audience threw flowers on her while she was singing. Next up was Bare Ghulam Ali, and though he tried his very best to continue in that vein of delicacy and enchantment with an accomplished rendition of Raag Kafi Kanra, he could not even enter, let alone break, the spell cast by his magical predecessor. In the end the great Ustad was compelled to praise and bless Roshanara Begum before the audience; and she stooped to his knees in a gesture of humility and graciousness’.
Awards
Roshan Ara Begum won the President’s Pride of Performance Award in 1960 from President Ayyub Khan and was the first female vocalist to be awarded the Sitara-e-Imtiaz.

Demise: Roshan Ara Begum’s died due to cardiac arrest on December 06, 1982. Her demise left the Kirana Gharana in Pakistan totally bereaved, although there are still a few exponents of this school of music in India.