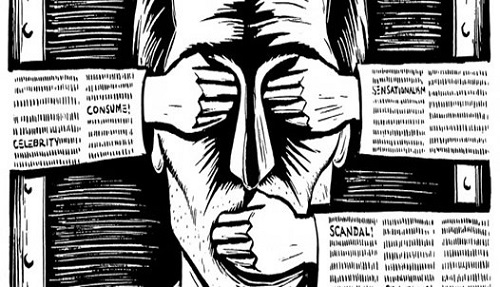 Highlighting injustice and demanding justice through peaceful means is a democratic exercise. When the powerful institutions, the powers that be and the government do not listen to or are unresponsive to people, peaceful public demonstrations or a hunger strike is a democratic right of citizens to register their protest over certain pressing issues.

Under such circumstances, the families of missing persons of Sindh organised a 72-hours hunger strike outside the Karachi Press Club under the banner of ‘Voice for Missing  Persons (VMPs)’ with a slogan “We  want justice” in order to get heard in corridors of power.

Every effort was made to sabotage the hunger strike staged outside the Press Club Karachi and within hours, the law enforcement agencies (LEAs) unleashed crackdown against peaceful protesters.

The peaceful participants were subjected to violence; the females were dragged down the road which left some  girls’ apparel torn apart.   Does the law allow male law enforcers to touch a female and her fabric?

Does the constitution of Pakistan allow the security forces to harass people who don’t take law into their hands?

Despite this incident outside the Press Club, journalist’s turned a blind eye to it. The incident was downplayed. However, some gruesome sights of the incident were uploaded on social networking sites like Facebook and WhatsApp which went viral shaking the conscience of the enlightened youth and the educated citizenry.

The uploaded footages showed law enforcers pointing their guns at protesters especially the girls; and in one video the law enforcer was clearly  heared abusing a young daughter of a missing person. It was this humiliation and vilolence the unarmed women and men were subjected to that brought overwhelming condemnation from across the sections of the society. Those images awoke the civil society from deep slumber and it  shook the conscience of the Sindh government too.

The then Sindh Home Minister Suhail Anwar Siyal, accompanied by the then Sindh Information Minister Nasser Hussain Shah reached the camp; the  daughters of missing persons – Tanveer Arijo, Susai, Sorath Lohar and Sindhu Amaan Chandio – a new face of resistance – who had offered stiff reaction against the crackdown  a day before, conveyed their concerns to  the ministers in  no uncertain terms  that they were shocked beyond belief having seen hate and anger in the eyes of the security forces.

Against this backdrop, there is a background which warrants both our attention and assessment.

The families who staged the hunger strike have been on the road calling and appealing to the authorities concerned for the release of missing persons.

They times and again have demanded either their loved ones be released or if they are involved in criminality, be produced before the court of law. Is this not a justified demand?

This call, on one hand, suggests that the children /family members of Sindhi missing persons are  law abiding individuals and on the other transpires  that those missing are not anti-state. Had they been , they would have poisoned the ears of their respective families against the state.

Worryingly, people suddenly go missing without any FIR or notice being served for under investigation.                           According to data recently released by the Commission of Inquiry on Enforced Disappearances (CIED) headed by Retired Justice Javed Iqbal, who is presently working as NAB chairman, shared with the Supreme Court (SC) of Pakistan and the National Assembly (NA) Standing Committee on Human Rights a total of 4,608 cases of enforced disappearances.

Baloch, Pashtoon, Mohajars, Sindhis and bloggers  have  gone missing for unknown and unexplained reasons and there is no fair trial, no charge sheet.

Undoubtedly, if one is involved in any criminal or anti-state activity or is involved in facilitating foreign agents; he deserves to be handed down punishment according to law. However, fair trial is a fundamental right of every citizen whatever the charges against someone may be.

When people are taken into custody after collection of concrete evidence of their alleged involvement in criminality or anti-state activities, why are they not produced before courts despite repeated demands by the families of the missing?

Failure to produce detainees to courts have questioned the credibility of so called allegations they were forcibly disappeared under. This is a gross violation of constitutional commitment and international laws  with regards to Human rights.

Human rights enshrined in the charter of the UN binding the states to reveal location of detainees and ensure their rights to due process guarantees.

These include the right to legal representation, the right to know the reason for their arrests, the nature of the charges against them, the right to have access to their families, the right to challenge the legality of their detention before a competent, independent and impartial tribunal and if charged with an offense, the right to be brought to trial within a reasonable period of time.

The fundamental right enshrined in Article 9 of the constitution of Pakistan guarantees that no person can be deprived of his liberty or freedom without due process of law.

And Article 10 A of COP 1973 calls for fair trial and section 167Cr PC for production of custody before magistrate within twenty-four hours.

We are a democratic country with functioning constitution, what is the use of democracy when basic human rights are denied and constitutional commitments  flouted? Indeed, time has come for the separation of Political dissent from anti-state-mindset.

Those who disagree with state policies and demand due political space , or highlight deprivation  should not be condemned as anti-state mindset.

Diversity and difference of opinion is the beauty  of democracy. Political dissent should not be crushed , rather a policy  of political rights and space for the marginalised communities should be ensured.

Such patronage will cement up the bond between the children demanding political justice and the state-mother. There is a long standing deprivation among small provinces and its people, such concern has been conveyed at proper forums.

Recently, the then three chief ministers of three provinces – Sindh, Khyber Pakhtunkhwa and Balochistan, had walked out of the National Economic Council  (NEC) held ahead of the  controversial federal budget  presented by the PML N government, alleging that the then government did not include provincial schemes in the Federal Public Sector Development Programme (PSDP).

Doing justice to provinces and giving political rights to those who have been pushed against the wall, is the proper prescription for ending this unhealthy environment.

The voice of the missing has reached the Canadian parliament on the heels of crackdown against peaceful protesters at Karachi Press Club  (KPC), where the conscientious MP has raised the issue of missing persons of Sindhi people and other communities on the floor of  the house.

It also is  set to reach other parliaments of the world  given the intensified hunger strikes across Sindh by the Bar Associations, students Action Forum and the civil society. Pakistan is a responsible state in the comity of nations that continually has been  raising her robust voice against the atrocities  inflicted upon the people of Kashmir, persecution of Palestinians and repression of Rohingya Population. If the state of  Pakistan continued persecution of its public, then the foreign capitals would not listen to its cries made against ongoing injustice in other regions.

Let democratic principles constitutional obligations, human rights and humanitarian considerations not be allowed to disappear in cases of the missing persons.

Justice should be done to the missing and their families.