* PTI hails professor as a 'neutral' person
* PML-N rejects appointment, tells ECP to review decision
* ECP says appointment made on merit, and only after politicians failed to fulfil their responsibility
* Dr Askari says no political party should worry about transparency of elections 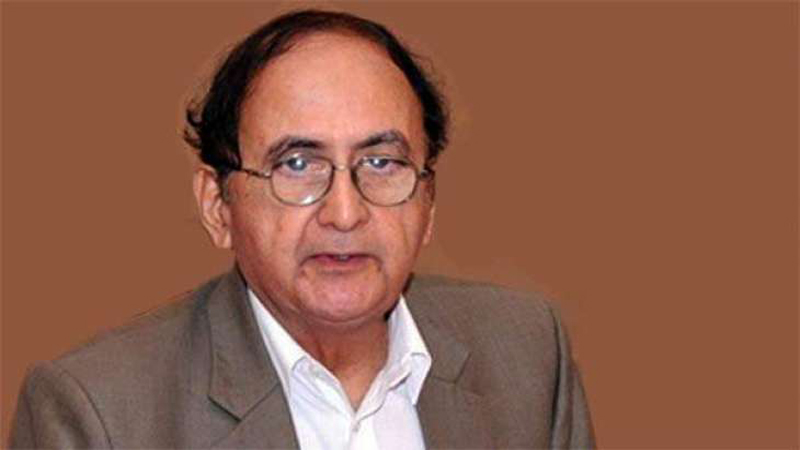 The PML-N-led then government of Punjab province had suggested Justice (r) Sair Ali and Admiral (r) M Zakaullah’s names for the slot, while the PTI-led then opposition in the Punjab Assembly had suggested names of news analyst Ayaz Amir and Dr Hasan Askari Rizvi.

The ECP appointed Askari as caretaker chief minister after parliamentary committee set up for the purpose failed to reach consensus over the matter.

Soon after the announcement was made, PTI leader and former opposition leader in Punjab Assembly Mian Mehmood-ur-Rasheed hailed the ECP’s decision. “I congratulate Askari over his appointment … he is a neutral person who would criticize not only PML-N but PTI too,” Rasheed said. 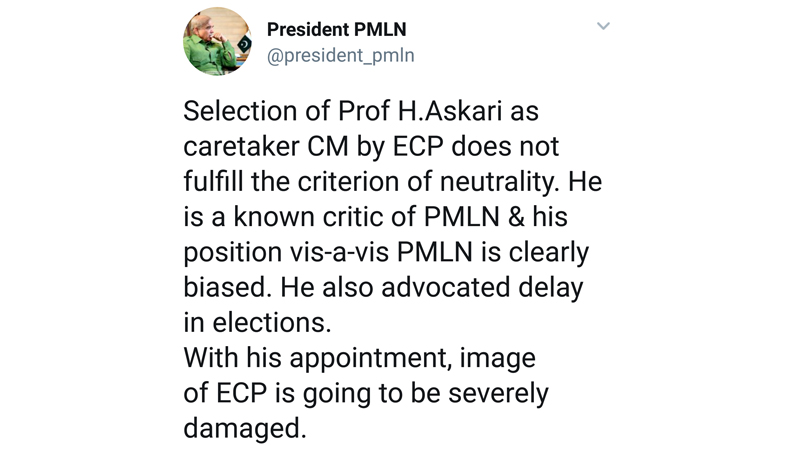 However, at a press conference held hours after the ECP chose Dr Askari for the slot, PML-N leaders voiced serious reservations over his selection and called on the commission to review its decision.

Former prime minister Shahid Khaqan Abbasi, accompanied by Khawaja Saad Rafique, Ahsan Iqbal, Khurram Dastgir, Rana Sanaullah and other party leaders, said Dr Askari was an ardent critic of the PML-N and that his partiality was evident in the views he expressed in his articles and news programmes. “It is unfortunate that the ECP chose Askari [for the position]. The PML-N will reject the election results if he is made caretaker chief executive of Punjab,” Abbasi said. “ECP’s decision has cast doubt over transparency of the upcoming general elections in Punjab,” he added.

Abbasi also presented an article titled ‘Election Challenges and Disputes in Democracy’ written by Dr Askari in January 2013. “He has justified 90-day martial law in this article,” claimed the former premier.

“We have reservations with Dr Askari as he has been a very vocal critic of the PML-N,” Rana Sanaullah said. “Dr Askari has always targeted our party. He does not believe in democracy and cannot be expected to ensure that elections are held on merit and without bias,” he said.

“We have issued a written statement over party’s reservations on Dr Askari’s appointment and we can also challenge this decision of the ECP,” he added.

The Election Commission of Pakistan (ECP), meanwhile, rejected the PML-N’s objections. ECP spokesman Altaf Khan, responding to the PML-N’s reservations, said that the decision to name Dr Askari as the caretaker chief minister was ‘unanimous’. The commission works on merit and is under no pressure, he said, adding that all four members of the ECP as well as the chief election commissioner agreed on Dr Askari’s name.

The spokesman said that the naming of the caretaker chief minister was the job of the politicians. “The ECP only fulfilled its constitutional obligation when politicians failed to fulfil theirs,” he added.

Talking to media soon after his appointment as Punjab interim chief minister, Dr Askari asserted that no party should worry over the transparency of the upcoming elections. “We will ensure that free and fair elections are held in the province,” he said, adding that he will not use his position for any ‘wrong objectives’. “I have no political agenda at all,” he categorically said.

To a question about rejection of his appointment by the PML-N, Dr Askari said he will accomplish his constitutional obligations. When asked how would he avoid allegations of rigging since a controversy had already been stirred up following his nomination by the ECP, he said, “We have learned from the past … so no political party participating in the general elections should worry over the transparency of the process.”