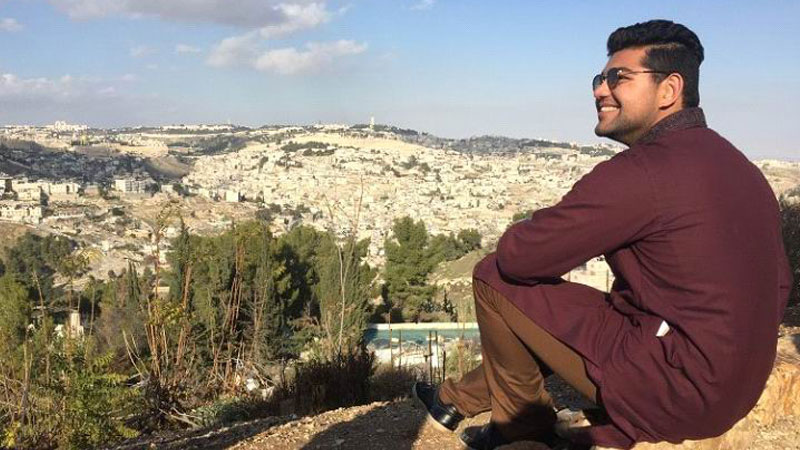 On my first day in Jerusalem, I woke up, preformed wuzu (ablution) and donned a new Shalwar Kameez that my grandmother had sent me from Pakistan. I thought to myself, “Today, I am representing my culture, religion, and family – and I will do it with pride.”

As I boarded the bus for the Western Wall- the holiest site in Judaism, my driver asked, “Where are you from?” “Pakistan!” I responded, to which he replied, “I’m from Pakistan, too!”

Years ago, Karachi was home to a vibrant Jewish community which has completely disappeared. Their only synagogue, the Magan Shalome, was demolished and converted into a shopping mall

I was stunned. There are Pakistanis in Israel?

“How long have you been in Israel for?”

In that moment it hit me that Shimshon is a Jew. I was shocked. I never imagined there could be Jews who were actually Pakistanis.

He spoke about growing up in Karachi – the city my family is from – and fearing for his life.

He was harassed in the street and his synagogue was targeted, along with the other Jews who were residents of Karachi. He had to flee to the only country that would take him in, Israel.

As we parted ways and I made my way for the Wall, he was all I could think

of. We come from the same land, speak the same language, and he could even pass for one of my relatives but because of his religion. Our country failed him and now he’s in Israel, the only place where he feels safe.

The pride I once felt in my heritage was overcome with shame. How could I be proud of my country when this is how we treat our minorities?

When you enter the Wall, you’re taken aback by its beauty. People are dancing, children are singing, and everyone, irrespective of faith or nationality, are celebrating. And that’s when I got the fact that no matter how I feel about the Israeli-Palestinian conflict, upon witnessing the wall, I realized that Israel is a place where people like Shimshon can feel safe.

Since President Trump moved the US Embassy to Jerusalem and Palestinians have been killed by Israeli forces for protesting the occupation, Shimshon and Pakistan’s Jewish community have been on my mind.

Years ago, Karachi was home to a vibrant Jewish community which has completely disappeared. Their only synagogue, the Magan Shalome, was demolished and converted into a shopping mall and the Bani Israel cemetery, which houses the remains of at least 300 Pakistani Jews, now, lies in disarray. While there are some streets and buildings that bare Jewish names and symbols, we have largely forgotten our Jewish heritage. In fact, whatever reporting has been done on Pakistan’s remaining Jews suggests that the majority of them have adopted Parsi or Memon identities and kept their true faith to themselves out of fear of discrimination.

As Pakistanis, we are not party to the Israeli-Palestinian conflict and thus, must not confine ourselves to only one narrative of history. The experience of persecution and anti-Semitism that Jews faced in Muslim-majority countries explains part of why this conflict has become so intractable. We can justifiably show solidarity with the Palestinians, as I do, but unless we, and other Muslim majority countries, reconcile our disgraceful history with the Jews, the prospects for coexistence between Israelis and Palestinians let alone Jews within our own borders will remain ever more remote.