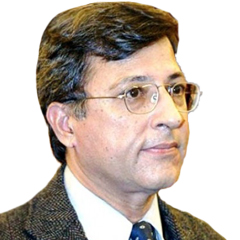 Twenty years later we must ask: what did the bomb actually buy for Pakistan?

Congratulations to India. Still more, to Pakistan! Their 20th nuclear anniversaries last week were barely observed, a far cry from the first few ones. We were not reminded of the loud celebrations on Delhi’s streets after 11 May 1998 or the colorful bhangras in Lahore that followed 17 days later. This time around all I could see were a few recycled pan a flexes on Lahore’s Canal Bank Road with an aged Dr AQ Khan gazing tiredly at the sky as though praying for the missiles to come in.

Such signs of maturity are welcome because, from time-to-time, political and military leaders of both countries revisit their 20-year tradition of hurling nuclear threats. 2018 saw at least two such occasions. But people now shrug off this bombast. They know that with enough megatons to finish off each other, neither country is stupid enough to start a nuclear war. This is sensible thinking and calming, although it presupposes no nuclear accidents or crazy men at the top.

So, have we arrived in the nuclear nirvana of Kenneth Waltz (1924-2013)? Back in the 1980’s Waltz wrote the proliferationists bible, “The Spread of Nuclear Weapons: More May Be Better”. He argued that nuclear weapons had made the world safer by making war impossible. Even if peace was not an option, they would prevent a full-scale war.

This false image needs to change. But it can only change if the underlying facts also change. This means building a sustainable and active democracy, an economy for peace rather than war, a federation in which provincial grievances can be effectively resolved, elimination of the feudal order, and creating a tolerant society that respects the rule of law

This standard political science stuff is okay for college undergraduates or junior military officers struggling for a degree. But its weak assumptions have been exposed by many. What Waltz did not understand sufficiently — as exemplified by Pakistan — was that nuclear weapons are about much more than deterrence.

Pakistan’s bomb was initially intended to counter the Indian bomb, i.e. for deterrence. But soon thereafter expectations increased manifold. It was hoped that the bomb would also help resolve the Kashmir dispute in Pakistan’s favour; create a new national spirit; and establish Pakistan as a leader among Islamic countries. How did these expectations pan out? Twenty years later it is surely time for an honest assessment. We must ask: What did the bomb actually buy for Pakistan?

Fact: the bomb did not move the Kashmir case forward by even an inch. How it could have was never clear but around 1987 — that’s when our first bomb was ready — a new idea worked its way into Pakistan’s strategic thinking. Nukes were seen as an umbrella from under which Pakistan could support militant groups to wage low-cost war against Indian forces based in Kashmir.

Kargil, followed by a humiliating retreat, happened within months of the nuclear tests. General Musharraf wanted to raise fears of nuclear escalation and invite internationalisation of the Kashmir dispute. The term “nuclear flashpoint” was often used by Pakistani officials when describing Kashmir.

But exactly the opposite happened. Despite the threat of nuclear escalation, global interest in intervening in the Kashmir dispute went down. Today it is at a historic low. Instead the focus of geopolitics moved to the rise of China and the threat of radical Islam. On June 1, Pakistan found itself back on the grey list of the Financial Action Task Force (FATF) for allegedly financing terrorist groups. Iron brother China did not oppose the move.

Did the bomb create a new national spirit in Pakistan? As in other countries — India included — the bomb was expected to help in nation building along with other tools such as holidays, flags, anthems, and, of course, military parades. These means are used by states to weld together disparate peoples, reduce internal conflict and so create the conditions for economic and political governance that require less resort to coercion.

The balance sheet here is mixed. Pakistan initially saw a surge of bomb-inspired nationalism. This has largely subsided everywhere except in Punjab, where it remains strong. But none of the class, religious, ethnic and linguistic divisions that plague Pakistan got healed. Angry Sindh is insist on water and jobs and they blame Punjab. The Baloch say that their mineral riches have been expropriated by the state and Baloch militancy refuses to go away. The Pakhtun Tahafuz Movement — which seeks elementary rights through peaceful protest — recently led to frenzied state repression.

Did nukes make Pakistan a leader among Islamic countries? Certainly, the 1998 tests resulted in a deluge of congratulations from other Muslim countries. Among them was Iran. But today the Muslim world is at war with itself. While Saudi Arabia and the Gulf monarchies covet Pakistan’s bomb, they are allied with Israel and see it as useful against Iran only. No one now talks of using the bomb for common defense of the ummah.

Whatever prestige it had gained in 1998, Pakistan’s present international image is terrible. Unless remedied, this makes Pakistan unsuited for leadership of anything. Our country is seen as a praetorian state; a country at war with itself and overrun by terrorists; a people seeking security, health or education; a nation in perpetual conflict with all its neighbors except China; and dangerous for non-Chinese foreigners to visit.

This false image needs to change. But it can only change if the underlying facts also change. This means building a sustainable and active democracy, an economy for peace rather than war, a federation in which provincial grievances can be effectively resolved, elimination of the feudal order, and creating a tolerant society that respects the rule of law. Adding missiles and bombs to the stockpile cannot make Pakistan better or safer.

More weapons might not qualitatively affect nuclear stability in the Subcontinent. However, geopolitics has undergone a tectonic shift and this creates new realities. Past nuclear crises (1987, 1990, 1999, 2002) had been resolved with the intervention of the United States. But now Pakistan deeply distrusts the US and, infact, sees it poised to snatch Pakistan’s nuclear weapons at an opportune moment. Who, then, could mediate the next nuclear crisis? Perhaps China and the US working together? Urgent: India and Pakistan — if they have actually matured — must find a mutually acceptable answer before the next one erupts.

The author teaches physics in Lahore and Islamabad