60% of Pakistani mothers and children suffering from micronutrient deficiencies 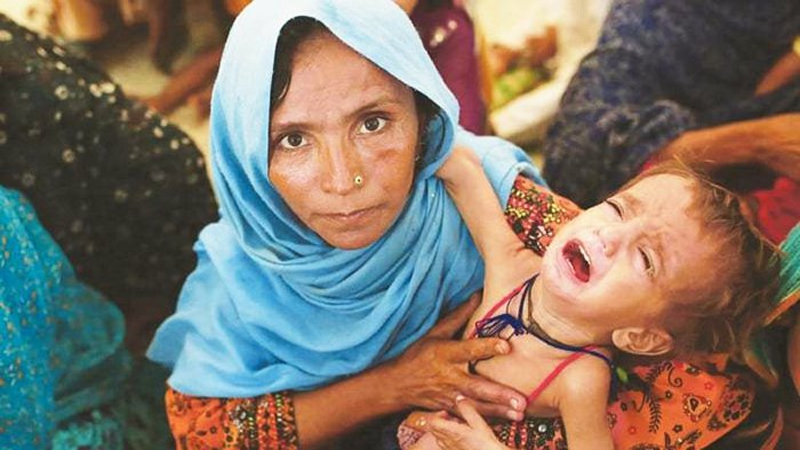 Up to 60 percent of Pakistani mothers and children suffer from micronutrient deficiencies as the country has the lowest exclusive breastfeeding rate at 37.7 percent and the highest bottle feeding rate at 41 percent.

According to the National Nutrition Survey, maternal nutrition and breastfeeding behaviour along with child underweight, wasting and micronutrient deficiencies are linked to more than 180,000 deaths annually, more than one-third of all child mortality.

It claimed that 43.7 percent of children under five are stunted, 15.1 percent are wasted and 31.5 percent are underweight.

The survey indicated that 14 percent of women of reproductive age are wasted and 50.4 percent anaemic, 21.1 percent are overweight and 9.5 percent obese.

Aimen Arif from the Pakistan Planning and Management Institute said that malnutrition is caused by a combination of dietary deficiencies, weak maternal and child health and nutrition care, water and sanitation issues, lack of awareness about health and nutrition issues, low literacy rate and low micronutrient content in the soil affecting immunity, growth, and mental development and performance in later years of life.

She said that one of the most severe effects of malnutrition in early childhood is stunting, or low height for age.

Stunting in early childhood is associated with a delayed start at school, reduced educational attainment, and substantially decreased adult wages when measured at both the individual and country level.

Aimen Arif said that the cost of healthcare services utilisation due to zinc deficiencies, low rates of breastfeeding, and low birth weight is also high.

Arif added that malnutrition among children has disastrous effects on the physical and mental growth of children, which hampers their productive potentials thus negatively impacting the country’s overall prospects of development.

There is now increasing awareness about the situation because of the tireless efforts of many national and international development actors, she added.

She said that with support from the federal government and development partners, various initiatives have been taken and are contributing towards national as well as international commitments. She said that malnutrition is a multi-faceted issue and its solution lies in concerted efforts of diverse sectors which are engaged in multi-sectoral planning, sectoral implementation and multi-sectoral monitoring, accountability and learning.

This requires an enabling environment to shape political, institutional and policy processes for improved nutrition in the country, she added.

Arif said that the Ministry of Planning, Development & Reform and the Planning Commission of Pakistan with technical support from World Food Programme have launched Pakistan Multi-Sectoral Nutrition Strategy.

She said that the document has been developed through a comprehensive consultative process, involving national and sub-national level stakeholders, and is linked with the provincial Inter-Sectoral Nutrition Strategies, aligned with the Pakistan Vision 2025 and Sustainable Development Goals.