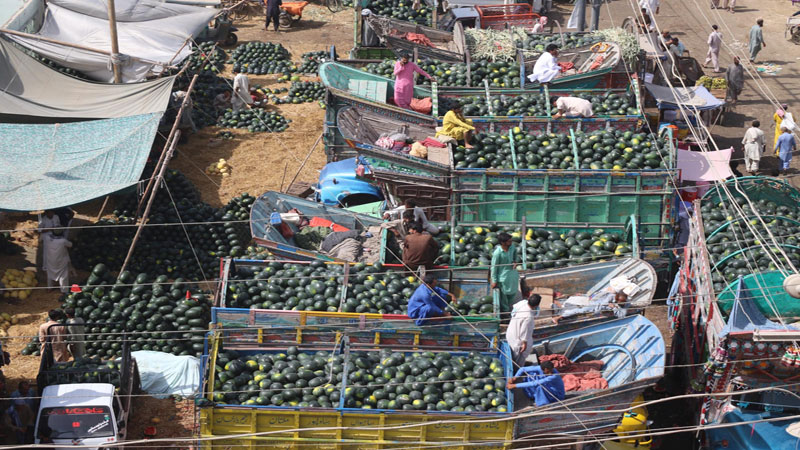 KARACHI: As the weather in the port city gets hotter the demand for watermelon has also increased making it a most sought-after item at Iftar tables.

Every day around 250 truckloads of watermelon arrive at the New Fruit and Vegetable Market from where the fruit is supplied to the rest of the city. Owing to growing demand, a large number of small and big roadside venders have set up stalls at almost every nook and corner of the city.

Harvesting of bumper crop has resulted in the reduction of prices almost up to Rs 30,000 per load, Fazal Khan Mohmand, a fruit dealer at the market told Daily Times.

Watermelon season starts from April and ends in late June or July in the country, a period when extreme hot weather persists in parts of the country, especially in Sindh and Punjab. Experts say watermelon is the perfect remedy to mitigate the impacts of simmering weather.

According to some estimates, the annual production of watermelon is around 400,000 tonnes per year.

However, this year farmers are not getting the increased prices of their produce due to supply glut. The farm rates of watermelons are around Rs 400 per maund.

Health experts say that sufficient intake of watermelon, especially during Iftar, is a perfect remedy for a dehydrated body as it contains essential vitamins and minerals.

Watermelon contains 92 percent water but this refreshing fruit is soaked with nutrients. Each juicy bite has significant levels of vitamins A, B6 and C, lots of lycopene, antioxidants and amino acids. There’s even a modest amount of potassium. In addition, this quintessential summer snack is fat-free, very low in sodium and has only 40 calories per cup,” according to health experts.