Mohammed bin Salman and the gold rush of singularity 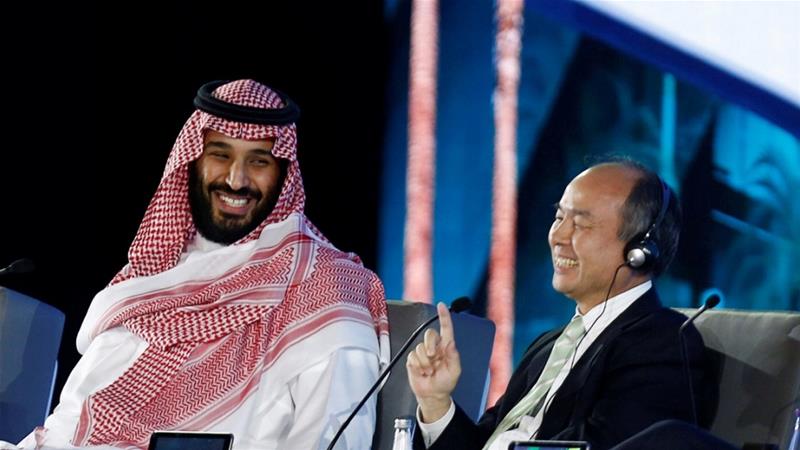 Masayoshi Son, with a net worth of $21.5bn, is reputed to be Japan’s wealthiest person. He is also one of the world’s slickest and smartest salesmen. In September 2016, Son met then Saudi Deputy Crown Prince Mohammed bin Salman. By the end of the 45-minute meeting, bin Salman, MBS, as he is known, had committed $45bn from Saudi Arabia’s Public Investment Fund (PIF) to Son’s Vision Fund. That’s nearly half the value of what has become the biggest investment fund the world has ever seen.

A year later, Son was asked by Bloomberg’s David Rubenstein if he got the money from MBS in one hour. To which the answer was “No, that’s not true. I got $45bn in 45 minutes, that’s $1bn per minute.”

When Rubenstein queried how Son had pulled off this remarkable feat – surely, the most extraordinary in the history of financial salesmanship – he replied that he had told MBS “I am going to give you a gift, a Masa gift, a $1 trillion gift. OK, now it’s interesting. You invest $100bn, I give you $1 trillion.”

Mohammed bin Salman, in what for him was a moment of uncharacteristic caution, settled on $45bn as an initial investment in Son’s fund.

When it comes to the Saudi crown prince, one tends to lose sight of just how much money, his and the government’s, he is eager to throw around. After all, he spent $500m on a yacht, $300m on a chateau in France and $450m on a painting which he then gave to his friend and mentor Mohammed bin Zayed, the crown prince of Abu Dhabi and de facto ruler of the UAE, allegedly in return for another yacht.

But $45bn in 45 minutes? That is truly staggering. Did MBS seek any economic advice about Son’s fund? Did he do any due diligence? Perhaps not. Rather, he has hitched a very large chunk of the Saudi economy to a vehicle called “singularity” and to the world’s greatest salesman of that vehicle, Masa Son.

Singularity is the point at which artificial intelligence (AI) surpasses human intelligence. Son believes that moment is a little more than two decades away. He is betting his considerable fortune – and that of his investors, of which the largest by far is Saudi Arabia – on a future where huge numbers of jobs being done by humans will be done by robots. And he is not just talking about service jobs. He is talking about doctors, lawyers, engineers, even, dare I say it, journalists.

At the Future Investment Initiative held in Riyadh in late October of 2017, Son was given the ideal stage to make his pitch. He argued that AI will be the greatest tool in humanity’s history, one that will disrupt and “redefine every industry”. He played his audience with affectionate ease while spinning out dazzling arrays of numbers.

After reminding them that Einstein had an IQ of 200, he spoke about a future where AI measured by IQ will expand to 10,000. He talked about a world where humans would live with 10 billion robots with “superintelligence”, adding with a wicked grin “they maybe will laugh at us.” Right now, Son is the one who can afford to laugh: he is the world’s largest manufacturer of robots, the bulk of which he is selling to China.

Son told his audience the chip manufacturer ARM which he purchased for $32bn in 2016 and which is part of his SoftBank Holdings empire will come to control up to 99 percent of the global market. He claimed his Vision Fund had shown a 22 percent return on investment in just a few months and he talked of a track record of 44 percent returns on his various investment projects.

When he spoke about MBS, there were no jokes about $1bn a minute. Not with this audience. Instead, he lauded the crown prince as a visionary who “already had the understanding, the vision which happened to meet the mind in 45 minutes. That’s how we create friendship, partnership and the bonding of minds.” Precisely the sort of praise MBS wanted to hear but, frankly, words of praise flow easily indeed when you have trousered $45bn.

When he wasn’t talking about the vast returns awaiting investors, Son allowed that how “money is not important, what is important is human happiness.” The coming age of Singularity has the potential to bring happiness to all, the 8 billion humans sharing the planet with 10 billion robots possessing intelligence beyond our comprehension: “I don’t think they will attack us, we and they will become friends in harmony.”

So, we can be relieved to know that the foremost salesman of Singularity has assured us we will not need to go to war with the robots he is creating. Thank goodness for that.

Less reassuring is the thought that the impetuous, authoritarian de facto ruler of Saudi Arabia has thrown his country’s lot and its future in with Son. There are critics who point to the fact that Son lost his entire fortune in the dot-com bubble of 2000. Not to worry, say supporters, and Son himself, look where he is today, the result of shrewd investments in AI and the hi-tech communications sector.

However, the distinguished thinker, linguist and scholar Noam Chomsky is deeply sceptical of the Singularity project. He bluntly calls it “science fiction”. Speaking in 2013, he described artificial intelligence as “the effort to programme machines to approximate certain aspects of human behaviour.” Chomsky added that 60 years of research and development of AI has “not really given any insight into the nature of thought and the organisation of action.” The brain is a complex place with 10 billion neurons, “that’s a lot of neurons” and he argues “to try to capture the nature of human intelligence and human choice is a colossal problem way beyond the limits of contemporary science.”

Such objections are not of concern to MBS. He has bought into the Son dream in a very big way, even providing the incubator in the $500bn city of the future NEOM, a place which will be powered, it is said, by artificial intelligence. No wonder Masayoshi Son is a man with a perpetual smile on his face.

But back in the real world of Saudi Arabia, there remains a shortage of affordable housing that runs to more than a million; the creation of meaningful jobs for the kingdom’s fast-growing youth population and the effective empowerment of the private sector are stuttering. Vision 2030, MBS’s ambitious restructuring of Saudi society and the economy, has a long, long way to go before it ever comes close to reaching its lofty goals. Meantime, the risk is that the pursuit of Singularity will come at a cost to more mundane and practical considerations.

For now, the song that Masa Son sings is music to the ears of the young crown prince, perhaps made all the sweeter because it has such an expensive price tag. But in the end, it may prove to be little else than a seductive, siren tune leading him and his country into deep and dangerous waters.