* Sindh CM tells Bilawal that the annual development spending in the province has gone up by 173% since 2008
* The allocation for the energy sector has seen the biggest hike in the last five years, Sindh CM’s presentation shows 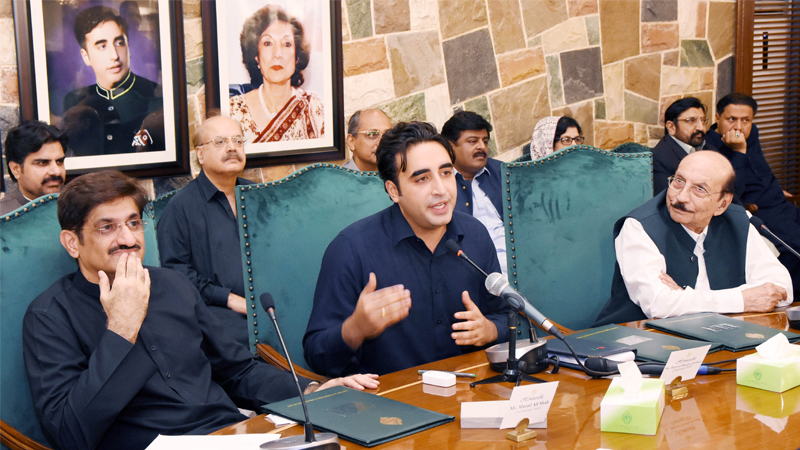 The CM said that with a 71 percent increase in the budget, the province had created around 20,000 new posts during the last ?ve years.

He said that the Sindh Education Foundation’s budget got enhanced from Rs 2.215 billion to Rs 9.593billion, while grants in aid for universities continued throughout the last five years.

Murad Ali Shah told the PPP chairman that the government had set up 28 degree colleges and 50 schools where cambridge system of education was followed.

CM Shah emphasised during his presentation that spending on the annual development programme had increased substantially during the last 10 years. “It has grown from Rs89 billion in 2008-09 to Rs.244 billion in 2017-18 (a 173 percent increase).

He also laid down governannce reforms undertaken in the province, telling the PPP chairman that the the Economic Reform Unit (ERU) had undertaken several activities for the purpose under the the Sindh Public Sector Management Reform Project (SPSMRP). He said the province had set up a Debt Management Unit to systematically manage provincial debt portfolio on modern lines, and a Tax Reform Unit to initiate evidence-led tax policy formulation-based on research and empirical analysis, an Internal Audit Unit that generates risk-based audit plans and conducts internal audits.

Under the Sindh Tax Revenue Mobilisation Plan (STRMP), the province has increased tax receipts from Rs91.37 billion to Rs185.62 billion in three years, the CM said, adding that the sales tax on services has increased from Rs33.67 billion to Rs100 billion during the last five-year period (a 24.32 percent annual compound growth rate).

Regarding improvement in the legal and regulatory framework, the chief minister counted among notable efforts the passage of the Public Finance Administration Act of 2018, the Sindh Financial Rules, and Treasury Rules, and the preparation of the Internal Audit Manual and the Internal Audit Charter of 2018, the External Debt Manual, the Capacity Development Strategy, the Budget Manual, and the Planning Manual.

Further, CM Shah said that the presentation of the Budget Strategy Paper (BSP) was now a regular feature of the budget formulation process, making it more transparent and participatory.

Along with BSP, Quarterly Budget Execution Reports (QBERs) were published to ensure transparency in budget execution by providing detailed information on budget allocation (original and revised) and actual expenditure incurred during each quarter, he said.

He said that need-based specific capacity development trainings were being imparted related to the areas of in public procurement, medium term budgeting framework, financial management, taxation, SAP, and advanced excel.

To monitor the government performance, a dashboard has started to prepare monitoring and evaluation reports initially for four departments that are being published on the website of the Planning and Development Department, he said. The session was attended by the former chief minister, Qaim Ali Shah, and the principal secretary to the CM.