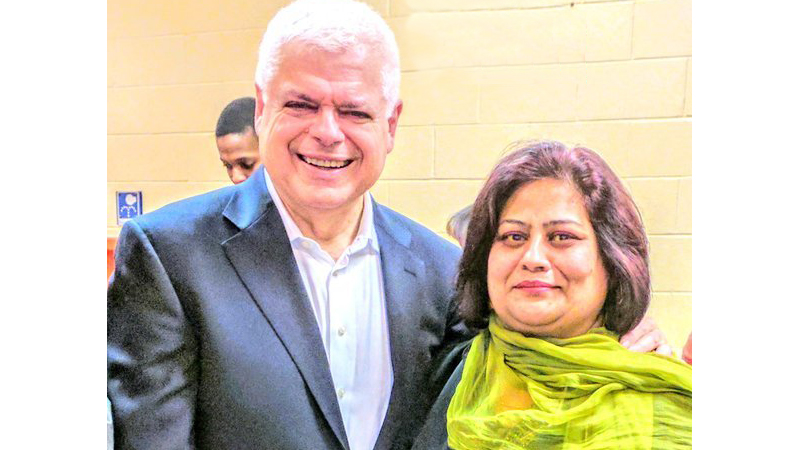 A woman Canadian politician of Pakistani origin is under fire as her opponents are calling her ouster from Ontario’s election race for her ‘anti-Semitic’ facebook post.

At a press conference on Friday PC candidates Todd Smith and Gila Martow, presented what they say is evidence of anti-Semitism festering in the NDP. They provided a printout of an October 2013 social media post shared by Tasleem, NDP candidate in Scarborough–Agincourt.

The Facebook post features a quote that is commonly attributed to Hitler overlaid over a photo of the tyrannical despot giving a Nazi salute to a gathered crowd. A title above the image reads, “The Ruler said about Rule.” The phrase below it — “If you don’t like a rule … just follow it … reach on the top … and change the rule,” is attributed to Hitler.

Smith called the post the most serious example of anti-Semitism we have seen in Ontario politics for a long, long time and criticized Horwath for what he characterized as a ‘laissez faire’ approach to dealing with candidates who express controversial views.

“You don’t post this kind of thing by accident. You don’t openly push Nazi messages on social media by mistake,” Martow said.

They also provided a screen shot of an April 2011 post allegedly written by Riaz, taking aim at the federal Liberals’ and Tories’ support for the war in Afghanistan. Riaz said the parties supported troops who “slaughter innocent men, women and children.”

Later, in a statement, Riaz said she is horrified that an inappropriate meme was on my Facebook page and that she cannot understand how it happened. “I don’t recall sharing it in 2013 and at no point in my life would I have done so intentionally,” she continued.

“I am an interfaith advocate, and I have devoted my life to interfaith religious tolerance and freedom. I work closely with the Jewish, Hindu, Christian, Sikh and Muslim communities in my neighbourhood. In every way, I find Hitler, the hate he spewed, and the genocide he committed to be abhorrent.”

During a campaign stop on Friday morning, Horwath said she was unaware of the details of the post and would have her staff investigate the allegations. She said, “Let me be pretty clear about our candidate. I’ve known Tasleem for some time now. This woman is an activist in the inter-faith community. I find it pretty unbelievable that she would be in any way implicated in anything that’s at all anti-Semitic,” Horwath told reporters. She added that PC Leader Doug Ford and his team live in a little bit of a glass house.

“This is coming from a party whose leader is accused of cheating in nomination meetings, cheating in the democratic process,” Horwath said, alluding to allegations that Ford improperly bought party memberships to support his preferred candidate in Etobicoke Centre.

Shortly after Horwath spoke, Liberal Leader Kathleen Wynne said on Twitter, “Andrea Horwath needs to be clearer in her condemnation of this post by her candidate. “No one in Ontario can or should attempt to draw inspiration from the words of Adolf Hitler. Canadian soldiers have earned and deserve our thanks, she said.

In 2015 federal election, Syeda Riaz, daughter of Tasleem Riaz, had contested elections but could not win.

Two months back, Wajid Ali Khan, former Canadian minister and a retired Airforce officer from Pakistan, was arrested on charges of fraudulently borrowing more than $1.1 million on pretext of investing their money in real estate in Pakistan.