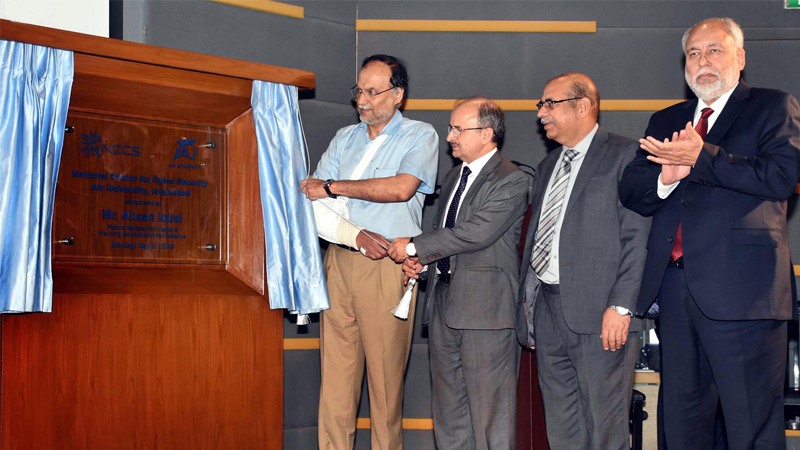 ISLAMABAD: Minister for Interior Ahsan Iqbal on Monday re-affirmed the government’s commitment to wipe out scourge of terrorism from the country, saying the terrorism had been curtailed to a large extent and the fight was still continuing to completely eradicate it.

Addressing the inaugural ceremony of Pakistan’s first-ever National Center for Cyber Security here at the Air University, the minister said people can now witness that peace has been restored in the country. “We made the National Action Plan (NAP) and launched a full-fledged operation against terrorists in the country, which will continue till complete annihilation of terrorists and extremists,” he said.

Ahsan Iqbal lauded the role of nation, armed forces, police and other law enforcement agencies (LEAs) in the war against terrorism. He said besides sacrificing thousands of precious lives, the country’s economy also suffered a big loss. “Peace is very much important for development as is oxygen necessary for human life,” he said, and added that the societies having instability and insurgency could not meet the pace of progress.

“We have to maintain unity and solidarity among our ranks to achieve the desired results,” he said, adding that some elements are spreading violence and attempting to make country hostage to their violent agendas but these elements will not succeed in their nefarious designs. He said that peace, stability and continuity of policies are the key elements and of vital importance to achieve fast-paced economic development and prosperity.

“There is no country in the world that is free of the challenges and problems. Every nation, when going through the development cycle, faces a lot of challenges,” he said. “Pakistan is poised to takeoff and we should start to celebrate the success stories of our country.”

The minister said establishment of National Centre for Cyber Security was his dream which had now been fulfilled. He said the government had also laid foundation of centre of mathematical sciences at PIAS while centre of excellence for artificial intelligence, cyber security and robotics were also being established in the country to prepare it to cope with future demands and challenges.