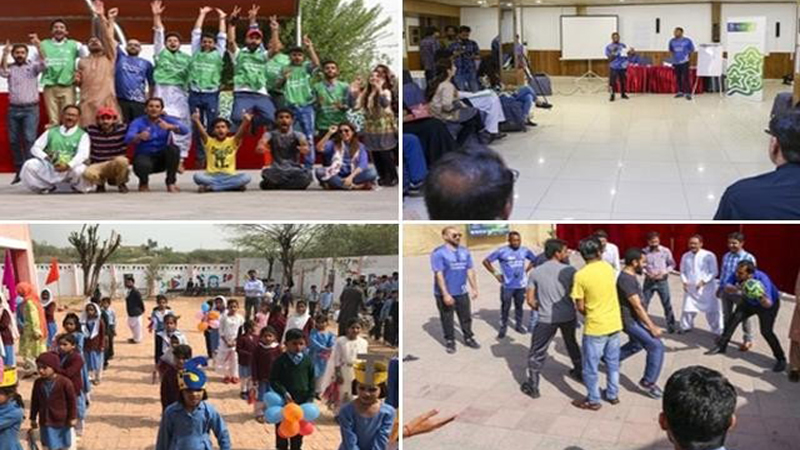 LONDON: The 2022 World Cup in Qatar may be four years and thousands of kilometres away but it is already touching the lives of children in Pakistan. More than 150,000 of the poorest children in the country will either be enrolled in schools or take up sport as part of the legacy of the 2022 World Cup. Tournament hosts Qatar have teamed up with the British Council Pakistan to expand the ILM Possible campaign and get 135,000 children into primary education across 60 districts. The Dosti programme is also being rolled out in 200 schools in Karachi, helping improve the lives of 20,000 children as sport is integrated into their lives. The schemes are part of ‘Educate a Child’, a global initiative to help some of the estimated 61 million primary school-aged children who miss out on an education due to poverty, war or natural disasters.

They are being made possible in Pakistan by Generation Amazing (GA), a project set up by Qatar which aims to benefit a million people by 2022 as part of the legacy of the football tournament. Last month GA was launched in four new countries – India, The Phillippines, Oman and Kuwait. Already more than 33,000 people in some of the most poverty-stricken parts of the world such as Syria, Lebanon, Jordan and Nepal have benefitted from the initiative – as has Pakistan.

Isabel Gultresa, Qatar’s Supreme Committee CSR manager, understandably enthused about the programme. “Generation Amazing has been active in Pakistan since 2010. We have built football pitches for children and young people from disadvantaged communities and mentored ambassadors to deliver our football for development programmes,” he said. “’Partnering with ‘Educate a Child’ allows us to continue making an impact in the country on a broader scale. Through football, we will reach children who didn’t previously have access to education, while also boosting the number of young people playing and engaging with sporting activity.”

In addition to this domestic programme, there is also Generation Amazing’s international programme which will be rolled out across five weeks during 12 sessions to more than 100 students per school, and reaching more than 20,000 children directly. The ‘Generation Amazing’ scheme, which aims to benefit a million people by 2022, is being spearheaded by the legendary former Barcelona and Spain midfielder Xavi Hernandez, 38. As Qatar’s global ambassador for the World Cup, he said: “The Generation Amazing motto would be similar to Johan Cruyff’s motto: ‘If you have the chance to help someone, you should’. I have seen first-hand what football can achieve in communities in Qatar and across the region. Football has the power to unite people, dispel stereotypes and break down social barriers.”

One refugee at the Al Baqa’a refugee camp in Jordan said: “It was the best experience I ever had. I love football and my teammates. We take the games very seriously, but it doesn’t matter who wins or loses. Just that everyone plays and has fun. I dream of becoming the best footballer in the world.”

Generation Amazing uses football for development initiatives to address social issues in countries with an identified need, in line with the United Nations Sustainable Development Goals.