Eidi for Edhi campaign kicks off 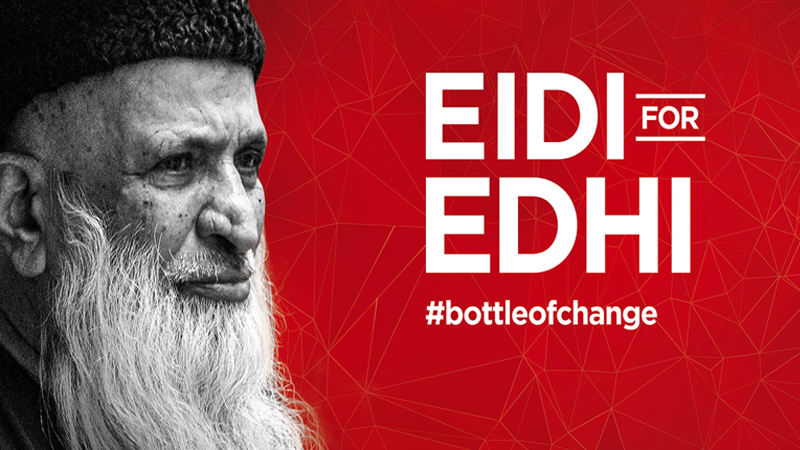 Karachi: Following last year’s exceptional response to Coca-Cola Pakistan’s fund-raising campaign supporting the Edhi Foundation, the company has once again announced to have partnered with Pakistan’s leading humanitarian and social welfare services organization for this Ramazan.

The ‘Eidi for Edhi’ campaign aims at inspiring the people and evokes values of generosity and kindness for an integrated fundraising drive to be implemented nationwide.

Rizwan U Khan, general manager Coca-Cola, Pakistan and Afghanistan, said, “As a caring corporate citizen, Coca-Cola realised last year that it was our moral responsibility to do whatever we could to support the foundation at a time when it was facing a decline in its own fundraising efforts. Drawing on our core strengths, we undertook a massive communication campaign last year, and I am pleased to announce that our campaign this year will be even bigger and more effective, drawing on all the learning of the last year.”

Since its inception, Edhi Foundation has been relying on public support, donations – both Zakat and non-Zakat. Without the enlightened leadership of Abdul Sattar Edhi, the foundation had faced a decline in donations during their first Ramazan after the sad demise of the noted humanitarian. “As such, Coca-Cola’s ‘Bottle of Change’ campaign became a positive instrument for donations to the Edhi Foundation last year, persuading people to donate even more than before to the foundation and thus help keep the great work of Edhi alive. The core message of the campaign this year remains the same, with the appealing slogan, ‘Eidi for Edhi’ reawakening public consciousness and willing people to come together for a great cause.”

Faisal Edhi, son of late Abdul Sattar Edhi and the present head of the foundation, said, “Coca-Cola’s campaign had triggered an immense momentum last year, helping the foundation raise considerable funds during Ramazan. The funds were used to extend the foundation’s charitable work to even more underprivileged people, and based on the success of last year the foundation was keen to partner with Coca-Cola again this Ramazan.”

He appreciated Coca-Cola’s several other interventions for other good causes, partnering with reputable non-profit organisations such as The Citizens Foundation for education, WWF-Pakistan for environmental conservation, Kashf Foundation for women empowerment, Rotary International for eradicating polio, and the Indus Earth Trust for water related projects.

“It is to be noted that the Eidi for Edhi campaign has no commercial angle whatsoever, and the fundraising is in no way related to product purchase. Coca-Cola will itself match all public donations received up to a cap of
Rs 25 million,” he said.

Also, this year the Ramazan fundraising will build further on last year’s partnership by evolving the ‘Bottle of Change’ into the concept of ‘Eidi for Edhi’. This will help citizens go beyond donating in cash, and also contributing in terms of meaningful gifts that the foundation will distribute among the less privileged in the society, bringing cheer to their lives on the occasion of Eidul Fitr.