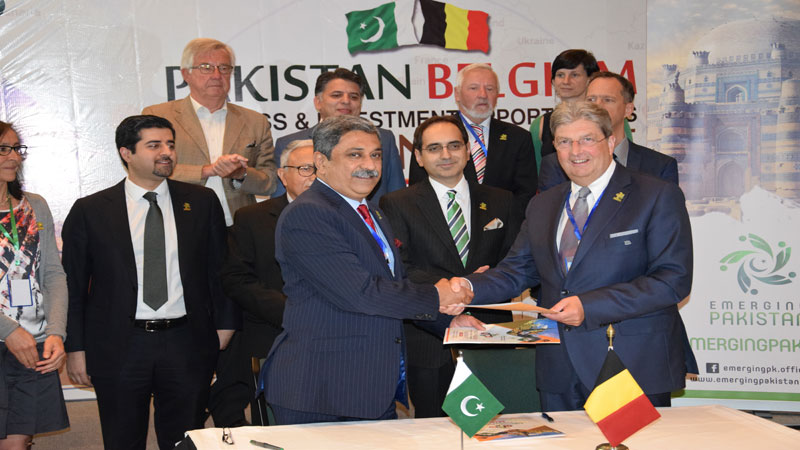 BRUSSELS: Pakistan Embassy in Belgium organised its first ever conference on ‘Pakistan- Belgium Business and Investment Opportunities’ in collaboration with Rawalpindi Chamber of Commerce and Industry (RCCI) to improve business ties with the EU countries on Thursday.

High level representatives from the Belgian government, office bearers of chambers of commerce and industry and leading businessmen from Pakistan, top European businessmen and Member of European Parliament Amjad Bashir were also present on the occasion.

In her opening remarks, Pakistan’s Ambassador to Belgium, the European Union and Luxembourg Naghmana Alamgir Hashmi welcomed the delegates and highlighted huge potential of trade and investment between Pakistan and Belgium.

She said that Belgium being Pakistan’s 10th largest export destination worldwide and 7th in Europe remains highly important for Pakistani business community. She pointed out that since 2013 bilateral trade between the two countries has increased by 38.07 percent.

Ambassador Hashmi underscored the need of diversifying exports from Pakistan. She pointed out that various areas still remained untapped and there was a need to work in the direction to identify how the two countries could benefit by exploring the areas where there were still gaps to be filled.

Member European Parliament Amjad Bashir appreciated Pakistani diaspora for running successful businesses in the UK and Europe. He added that by living in Europe they have huge advantage to invest in the country of their origin. He also pointed out that geo-strategic location of Belgium was a huge advantage for trade and commerce between Pakistan and European countries.

President Rawalpindi Chamber of Commerce Zahid Latif Khan told Daily Times that the conference was third event of the series and the first two were organised in Birmingham and Doha respectively.

He further mentioned that the event was a success although he could not manage to bring many members from RCCI to Brussels due to visa hurdles. He said that chamber has engaged Pakistani embassy to work on another meetup with European business partners also making it sure that the delegation can bring more businessmen in the next meeting.

The RCCI president mentioned that Pakistan still remains one of the key producers of textile, sports gear, surgical equipment and dairy. “A number of companies have showed interest in doing business in the fields of pharmaceutical, data management and dairy products apart from talking about investing in energy sector such as wind energy and also in areas connected to the CPEC project,” Khan said.

He said that he has also met few of the biggest meat importers in Europe and aims to connect them with Fauji Foundation in Pakistan to get Pakistani meat, hides, dairy and related products exported to Europe as Pakistan remains fourth biggest producer of milk in the world.

Khan said that Pakistani rice growers have got a unique opportunity to stage a comeback into the rice export arena after Indian exporters, many of those who are also exporting Pakistani rice with Indian titles, got banned by EU due to some technical hitch or failure. He said that he would talk to the relevant businessmen on the issue once he’s back home.

He also told the conference that RCCI being the third largest chamber in Pakistan has become the voice of Pakistani business community all over the world. Keeping in view the vital role of women in development of any country, RCCI has also introduced an incubation centre for businesses being run by women.

A Memorandum of Understanding was signed between the RCCI and Brussels Enterprises Commerce and Industry with a view to bring business community of two countries closer and promote trade and commerce among them.

Belgium is an important trading partner for Pakistan in Europe, as it follows the common Trade Policy adopted by the European Union. The grant of GSP+ status to Pakistan by the EU allows zero tariffs concession on 66% of Pakistan’s products in the member countries of European Union including Belgium.