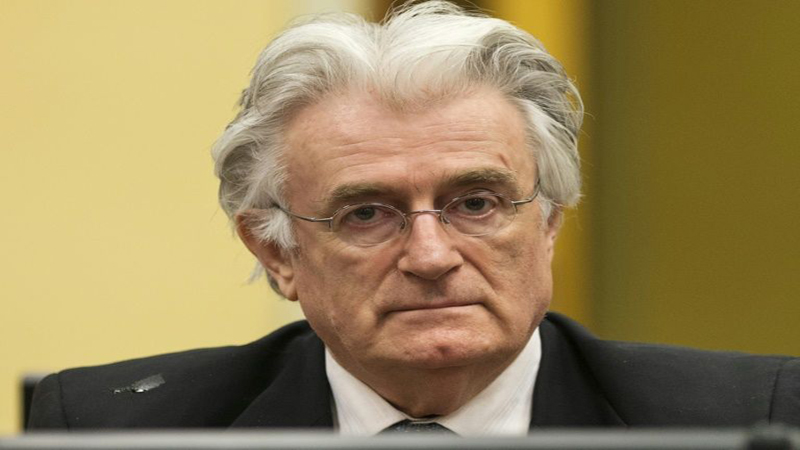 Karadzic, 72, was sentenced to four decades behind bars in 2016 for genocide, war crimes and crimes against humanity, arising from the Balkan country’s three-year war which killed 100,000 people and left 2.2 million others homeless.

The former strongman — with his recognisable bouffant hairdo — was “at the apex of political and military structures” of the Bosnian Serb leadership and “at the forefront of developing and promoting its ideologies”, judges said at his sentencing in March 2016.

They found Karadzic guilty on 10 counts, including one of genocide for masterminding the 1995 massacre at Srebrenica, deemed the worst bloodshed on European soil since World War II.

Judges also found him guilty of being behind the bitter 44-month siege of the Bosnian capital Sarajevo, in which 10,000 civilians died in a relentless campaign of sniping and shelling.

But Karadzic was acquitted on one count of genocide, with judges saying there was not enough evidence to prove “beyond reasonable doubt” that genocide was also committed in seven Bosnian towns and villages.

Karadzic appealed on 50 grounds and accused judges of conducting a “political trial” against him, while prosecutors said the trial judges “erred in law and fact”, asking that their original demand for a life sentence be reinstated.

His lawyer Peter Robinson said Karadzic did not get a fair trial as the UN judges “presumed him guilty and then constructed a judgement to justify its presumption.” In appeal documents, Robinson added that even though Karadzic was jailed for 40 years, trial judges “could have been under no illusion they were imposing a life sentence”.

Appeals judges should therefore “vacate the sentence of imprisonment and, if it upholds any convictions, impose a new sentence, taking the mitigating circumstances into account,” Robinson said.

But in Banja Luka, many see the court as “unjust and selective, basing itself on scenarios prepared in advance,” Bosnian Serb political leader Milorad Dodik told AFP.

“It has not succeeded in imposing itself as a place of justice where reconciliation can be achieved,” he added.

The hearing at the Mechanism for International Criminal Tribunals (MICT), which has taken over the ICTY’s functions, will start at 0920 GMT.

After a short introduction by presiding judge Theodor Meron, both Karadzic and prosecutors will have three hours for submissions and responses.

The sitting will resume on Tuesday, when Karadzic will also have the chance to personally address the judges.

The one-time psychiatrist is the highest-ranking official sentenced by the ICTY, set up in 1993 to prosecute those behind the Balkans bloodshed.

Former Serbian strongman Slobodan Milosevic died in his prison cell in 2006 before the end of this trial.

During Karadzic’s marathon trial, which ended in October 2014 after an exhausting 497 days in the courtroom, some 115,000 pages of documentary evidence were presented along with 586 witnesses, while court officials recorded some 47,500 pages of transcripts.

Before his 2016 sentencing, Karadzic revealed he was so convinced he would walk free on his judgement day that he had already packed his bags.