US airstrikes against Syria — a violation of international law

How can punitive action be taken against a country before the offense is established?

The US, the UK and France have trampled the international law by attacking a sovereign country, Syria, with more than hundred cruise missiles, apparently, to ‘destroy the Syrian regime’s chemical weapons research, development and production capabilities.’ Why would Assad gas his own people in this point in time when he is enjoying a tremendous triumph on the battle field; has he done so, must be the craziest man on the planet earth?

The US and her allies alleged Syrian president Bashar-al-Asad of gassing women and children of Douma, and took punitive measure without waiting for the Organization for the Prohibition of Chemical Weapons (OPCW) Fact-Finding Mission to come up with their inquiry results. When the Syria was pounded with missiles, the OPCW inspectors had just arrived Syria to start inquiry next morning.

Why did they strike a sovereign country without the approval of UNSC? How on earth they could take punitive measure against a country before the offense is established; approval is granted by the UNSC?  Isn’t this a flagrant violation of international law? Doesn’t it undermine UN, an already ineffective world body, further? Doesn’t it give the impression as if the world is a jungle where ‘might is right’ is the order of the day?

The leader of Britain’s opposition Labour Party Jeremy Corbyn declared British strikes as illegal saying it encourages other to act unilaterally. He also said the British Prime Minister, Theresa May, should not be “taking instructions from Washington and putting British military personnel in harm’s way.”

Jean-Luc Melenchon, one of French President Macron’s old rivals rightly said, “The strikes against Syria are without proof, without a UN mandate, and against it, without a European agreement and without a vote of the French Parliament”.

As long as Russia supports Assad, he is going to stay at the helm. Iran and Hezbollah will also be carefully analysing their options. The multilateral attack on Syria and NATO’s support show that the US and its allies are trying to mobilise a larger part of the international community to act against Bashar and his allies

The US unilaterally carried out airstrikes last year on a Syrian airbase as a direct response to the alleged Khan Shaykhun chemical attack. The terrorists at the time, too, were under tremendous pressure from the Syrian government. Syria and Russia blame UK intelligence agencies for a false flag op in Douma, which the UK vehemently denies saying they have enough evidence to prove Assad’s involvement in Douma attack.

Should the world believe in the UK and the US intelligence agencies word? The history suggests otherwise. The Iraq Inquiry, also referred to as the ‘Chilcot Inquiry’ clearly suggests that the UK intelligence deliberately lied and provided flawed information; then Prime Minister Tony Blair has promised then US president George W. Bush to support his Iraq war decision at all costs. The US also admits that there were no Weapons of Mass Destructions (WMDs) found in Iraq. How could the US and UK clandestine agencies be believed? They mislead the world in the past, can’t they do it again? How could you believe them in Syria’s case?

With US and her allies conducting air strikes, would it change ground realities or shifts balance of power in terrorist’s favor in Syria?

Asad and his allies control larger part of Syrian territory with terrorists on the run. The US has announced the mission is accomplished; at least for the time being, there would be no more airstrikes. The recent strikes couldn’t destroy Syrian military capability, nor do they oust Assad. The AFP reported saying rebels were not satisfied with the airstrikes calling them ‘farce’ because Syrian President Bashar Al-Assad is still in power. The Syrian military reiterated their resolve to fight terrorism claiming to destroy most of the missiles midair with air defense system. Hence, militarily there won’t be any major change in the balance of power.

Now question arises what do the US and her allies achieve with these airstrikes? Did they intend destroy Asad’s military capability; or change balance of power in terrorist’s favor or appease Mohamed Bin Soleman (MBS) or send a strong message to Iran and Hezbollah?

In recent few months, MBS visited the US, the UK and France. Donald Trump threatened to pull out of Syria only to increase Saudi anxiety; later, saying that Saudis may have to ‘Foot the Bill’ for US military presence in Syria which the MBS seems to have answered in the affirmative. The US and the Kingdom of Saudi Arabia (KSA) has signed an agreement in 2017, according to which, the Saudis would purchase arms from the US worth 110 billion dollar over the next ten years. Just recently, the White House has approved sale of arms worth 1 billion dollar to the KSA. 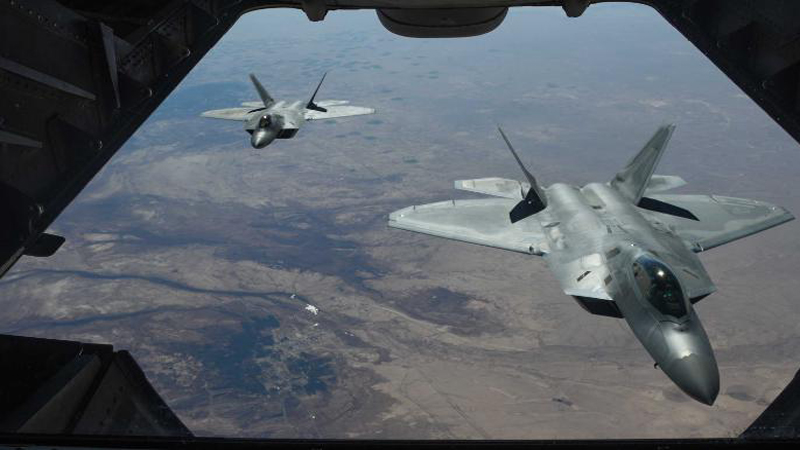 The KSA and the UK signed trade and investment agreement worth $90.3 billion during MBS recent visit to the UK. The France too has signed deals worth $18 billion with the KSA. The airstrikes against Syria have no military significance, but serves economic interests of the belligerents who want to milk the Saudis and exploit the adventurous MBS to his maximum.

The UN Secretary-General António Guterres speaking at an emergency session of the UNSC, convened at Russia’s request, asked Member States “to act consistently with the Charter of the United Nations and with international law in general.”Of course, he was talking in the context of recent blatant violation of international law by US and its allies.

Although Trump called strikes “perfect” but independent sources suggest around seventy percent were intercepted by the Syrian air defense which is quiet great an interception rate. The Syrian Observatory for Human Rights says 65 out of 103 missiles were successfully intercepted while the Russian defense ministry suggests 71 out of 103 met the same fate.

Russia and Iran warned the US of grave consequences but exercised restraint. Turkey that is closely working with Iran and Russia supported the US airstrikes on Syria calling them “appropriate response” which indicates that despites Ankara’s convergence with Iran and Russia on Syrian issue, there is still divergence when it comes to extending support to Bashar-al-Asad.

As long as Russia supports Assad, he is going to stay at the helm. Iran and Hezbollah will also be carefully analyzing their option. The multilateral attack on Syria and the NATO’s support the act show that the US and its allies are trying to mobilize a larger part of international community to act against Bashar and his allies.

As the UN Secretary-General recently said that there is no military solution to the Syrian issue, all belligerents should take a note of this and come to negotiating table giving peace a chance and allowing Syrians to exercise their inalienable right of self-determination.