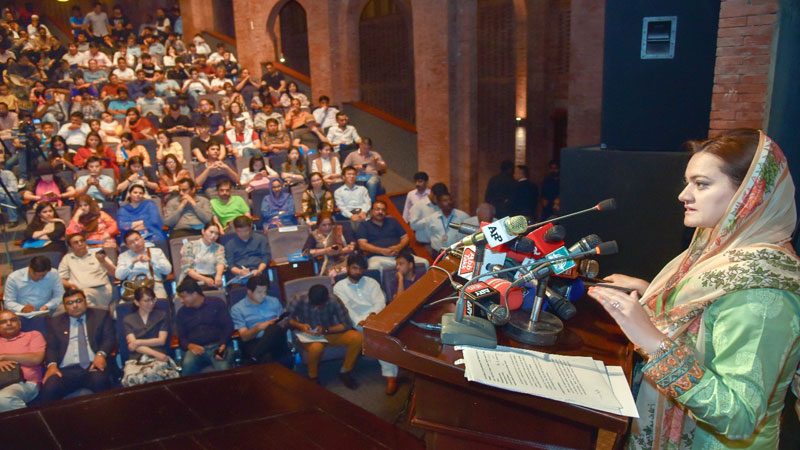 ISLAMABAD: Minister of State for Information, Broadcasting, National History and Literary Heritage Marriyum Aurangzeb Thursday said that China Pakistan Economic Corridor (CPEC) was a game changer for the coming generations as it would strengthen the economies of entire region.

Speaking as chief guest at the third anniversary of China Cultural Centre at Pakistan National Council of Arts (PNCA) here she said that Pakistan and China were located at the centre of the world and that was why the entire world was showing interest in the corridor.

She said that CPEC, a flagship project of Belt and Road Initiative was proof of Pak-China friendly state-to-state relations and a symbol of trust and cooperation that both sides enjoyed with each other. The cultural diplomacy between Pakistan and China had further cemented the deep-rooted bilateral relations, she added.

Marriyum observed that the Pakistan National Council of the Arts under the stewardship of its Director General Jamal Shah was not only making strenuous efforts for promoting culture within the country, but was also playing significant role in strengthening cultural diplomacy between the two countries.

The minister observed that the Pak-China friendship had been given different names at different times and CPEC had unleashed a new era of bonhomie between the two countries.

Marriyum said that Pakistan was committed to the cause of economic integration, development, strengthening the bilateral

She said that Pakistan and China were iron brothers and the present government wished to see the relationship gaining strength with each passing day.

She said she was glad to say that China Cultural Centre, Islamabad was instrumental to strengthening the bonds of friendship and fraternity between the two countries.

She said that at the cultural centre besides cultural activities, the students were being taught the Chinese language. She appreciated the efforts of the Chinese ambassador in making the centre a success.

The minister said it was her belief that sustainability of economic prosperity and cooperation required mutual understanding of each other’s culture, heritage and language.

The minister said that Pakistan’s first-ever Film and Culture Policy has been included in the finance bill for the next budget as Pakistan was unable to use screen tourism to boost its image. She said that film, national heritage, culture and languages played key role in projecting the real soft image of Pakistan.

She said when Chinese President visited Pakistan in 2014 he and the former Pakistani prime minister Muhammad Nawaz Sharif signed the historic agreements and inaugurated the CPEC.

She congratulated the Chinese government, the Chinese embassy and those associated with the centre on successful completion of three years.