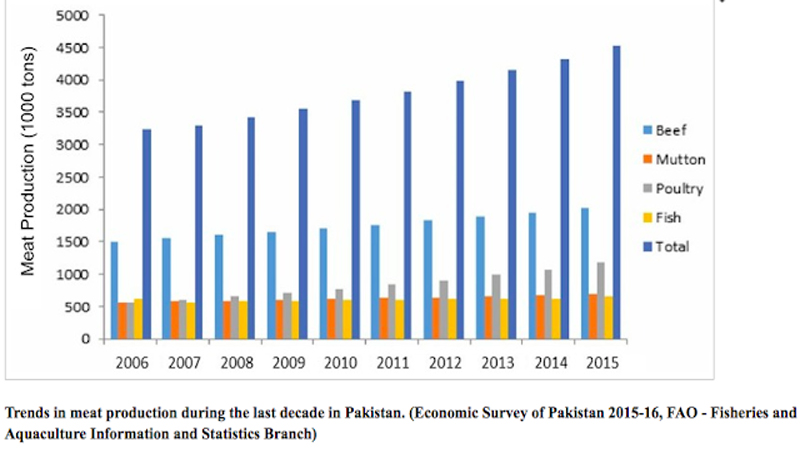 Pakistan’s per capita daal (pulse) consumption has sharply declined to about 7 kg/person from about 15 Kg/person in 2000, according to data released by Food and Agriculture Organization and reported in Pakistani media. Meat has replaced it as the main source of protein with per capita meat consumption rippling from 11.7 kg in 2000 to 32 kg in 2016. It is projected to rise to 47 kg by 2020, according to a paper published in the Korean Journal of Food Science of Animal Resources.

Economic Survey of Pakistan reported that Pakistanis consumed over 45 million tons of milk in fiscal year 2016-17, translating to about 220 Kg/person.

FAO’s “State of Food and Agriculture in Asia and the Pacific Region” says that Mongolia and Pakistan are the only two among the 26 countries in Asia Pacific region where per capita milk consumption exceeded 370 grams/day.

Pakistan’s per capita meat consumption has nearly tripled from 11.7 kg in 2000 to 32 kg in 2016. It is projected to rise to 47 kg by 2020, according to a paper published by the United States National Library of Medicines at the National Institutes of Health (NIH). Organization for Economic Development (OECD) explains that meat demand increases with higher incomes and a shift – often due to growing urbanization – to food preferences that favour increased proteins from animal sources in diets.

The NIH paper authors Mohammad Shoaib and Faraz Jamil point out that Pakistan’s meat consumption of 32 Kg per person is only a third of the meat capita meat consumption in rich countries like Australia and the United States.

A study published in Proceedings of the National Academy of Sciences and Nature magazine reports that Pakistanis are among the most carnivorous people in the world. After studying the eating habits of 176 countries, the authors found that average human being is at 2.21 trophic level. It put Pakistanis at 2.4, the same trophic level as Europeans and Americans. China and India are at 2.1 and 2.2 respectively.

IN 2016, Pakistan’s then finance minister Ishaq Dar suggested to his countrymen to eat chicken instead of daal (pulses or legumes). To some, the minister sounded like Queen Marie-Antoinette (wife of France’s King Louis XVI) who reportedly said to hungry rioters during the French Revolution: “Qu’ils mangent de la brioche”-“Let them eat cake”?

The reason for higher daal prices and relatively lower chicken prices can be found in the fact that Pakistan’s livestock industry, particularly poultry farming, has seen significant growth that the nation’s pulse crop harvests have not.