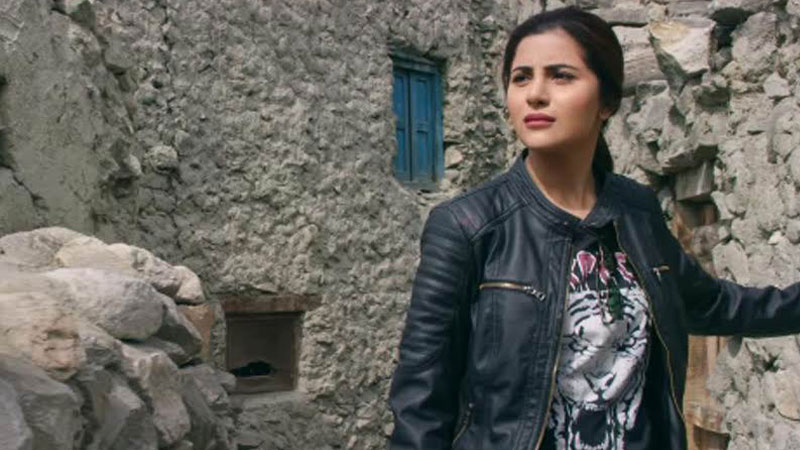 Sohai Ali Abro isn’t necessarily pompous, but she definitely drives her point home. On her visit to Islamabad for the promotions of her cinematic comeback vehicle, the Adnan Sarwar directorial, Motorcycle Girl, we caught up with the starlet and she’s simply a ball to speak with. After delivering two hits, namely Wrong No. and Jawani Phir Nahi Ani (JPNA), Sohai’s latest offering is a departure from her usual endeavors and narrates the real-life journey of Zenith Irfan’s self-discovery, who became the first woman to go on a solo trip across the Karakoram Highway.

She doesn’t want to be known for her number of social media followers or the kind of pictures she puts up, but has in fact been working towards honing her craft over an unexpected sabbatical. In conversation with Daily Times, Abro opens up about how she feels she has a spine, not being a people’s please and riding the CT70 motorbike straight into cinemas. Excerpts from our tete-a-tete follow:

You took a little over two-year’s hiatus from cinema before returning with a film that solely revolves around your character. Do you think there would be more films that have such strong female representation made?

Well, for starters, it was never intentional. After JPNA, most of the work that came to me was putting me inside this box of comedy and dance. Of course there aren’t a lot of films like Motorcycle Girl being made, but that’s how change happens. You can’t expect better roles for women to be written by doing nothing about it. It’s only when you say ‘no’ to certain projects and make them understand that we’re not just arm-candy that things change. You have to be given some room to perform and show a different side of yourself. It’s the death of an actor when you continue doing the same thing because it’s working.

2015 was your year and you officially had become Pakistani cinema’s most successful actress in terms of box office acclaim. Was it a risk taking up Motorcycle Girl?

Of course, it was a risk. But my idea was never to be the ‘most successful.’ I have just always wanted to do justice to what I was doing. I think it’s much easier to simply pass judgments, but it’s only after you’ve seen the film that you’ll get to know who all it does cater to. I just want to do it all. Since I was a child, I’ve wanted it all and I will create it for myself. My aim as an actor is to understand what films are and how I can deliver. That’s all we can do as actors, some films work and some don’t; that’s just the bitter truth, but I don’t have an issue with that as long as I’m content with what I’ve done.

In the process, you turned down several film offers including the blockbuster Punjab Nahi Jaungi. Are there repercussions for rejections?

There are; people get offended, you lose out on money, contacts and opportunities. When I’d started off, people would tell me to do everything that comes my way. I’ve always wanted to create my own world. I’ve never been a follower, I’ve always been someone who sets the trend and I genuinely don’t want to be a part of the rat-race. We’re all being driven by different objectives. I can’t blame people who don’t have the capacity to understand where I’m coming from; let them be the food stalls offering everything everywhere (laughs). I’ve learnt that you can’t please everyone; I just want to please myself.

Most importantly, what was it like learning to ride the motorbike before going on floors?

I trained for almost a month and its funny how I never even rode a bicycle before; I was always a Karachi’s little girl. When I was growing up, I’d ride the scooter or skate, so earlier when I was shooting for a drama serial in Lahore, I learnt how to ride a bicycle during my breaks (laughs). Later, Adnan’s team familiarised me with the motorbike. I remember when I first signed the film; I made Adnan promise me that I wouldn’t get hurt.

So I actually learnt how to ride at a rescue academy outside of Lahore. I would wake up early in the morning and drive to this place, and a few days down the lane, I realised that I had this awful sun-burn, I don’t mind getting tanner, but in Pakistan you don’t get sun-kissed, you get burnt-marks all over your skin. It’s anyway difficult for a woman to ride a bike, but I have huge respect for whoever rides a bike out there. It’s not an easy job, your hair are sweaty and all messed up when you take off the helmet and you have sand on your skin, it is disgusting (laughs). And I have to tell you, I was very scared initially also, there would be times I’d call up Adnan crying and telling him I couldn’t do it, but honestly, the fourth day, I was riding all by myself.

Most of the film has been shot up-north till the Khunjrab Pass, what part of the region did you enjoy the most?

All these places were beautiful, but the people of Hunza and the way they live were just amazing to experience. It was such an eye-opener for me; so very fascinating. You know when people would tell me that Hunza’s not like Pakistan or you don’t feel like you’re in Pakistan, I’d think of its beauty, but now, having been there, I think the way the people there have maintained their culture, heritage and traditions adds so much more. They know their roots, they know who they are, yet the literacy rate over there is so high. We actually had a sequence in a school, so we shot there and the kids there blew us away. I’m just glad I got to witness all of this. In fact I wouldn’t mind completely shifting to Hunza and living there and eating yak every day (laughs).