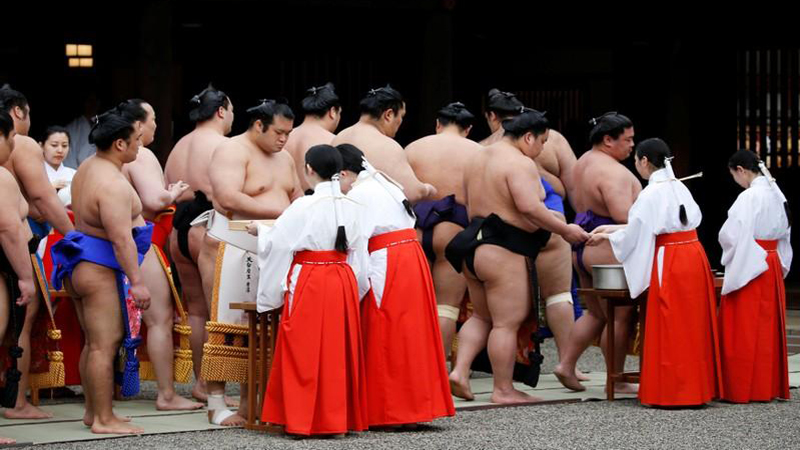 TOKYO: Laughter, sunshine and optimism were the order of the day at the ceremonial Spring Festival sumo tournament held at a controversial war shrine in Tokyo on Monday. As the ancient sport looks to move on from a raft of negative publicity surrounding incidents ranging from assault and bullying to accusations of sexism, there were few signs evident that the recent issues would dampen sumo’s popularity. Hard core sumo fanatics and tourists alike flocked to the event held at the Yasukuni Shrine, seen by many in Asia as a symbol of Japan’s past militarism. They were treated to exhibition bouts, preceded by time-honoured foot-stamping ceremonies, as well traditional chanting and even a comedy routine explaining the dos and don’ts of sumo wrestling.

One of the more controversial ‘don’ts’ within the sport, although not mentioned on Monday, is the tradition that forbids women from entering the ring on the grounds that it is sacred and their presence, considered “unclean”, would pollute it. Earlier this month, Japan Sumo Association chairman Hakkaku, who led a prayer during a more reflective moment in the shrine, was forced to apologise after several female medics were asked to leave the ring during a tournament near Kyoto. They were expelled by a referee when they attempted to revive local mayor Ryozo Tatami, who had collapsed but later made a recovery in hospital.

Many fans leaving the shrine on Monday believe sumo wrestling should be more inclusive, particularly with the next Summer Olympics taking place in Tokyo. “We, sumo fans, hope to build up the mood of excitement all together, regardless of gender, as we head towards Tokyo 2020 Olympics,” said Takamichi Masui, who had travelled all the way from Mie Prefecture for the festival. “Although sumo is a traditional and sacred ritual, I believe that (the female medics incident) was a humanitarian and right thing to do,” added sumo fan Hiromi Omori, who stressed that those traditions should be applied on a case-by-case basis. Although rare, female sumo wrestling does occur all over Japan at an amateur level. However, the JSA does not allow women to compete professionally, like their male counterparts. The history of sumo, Japan’s national sport, can be traced back more than 1,500 years, with its roots in a religious ritual conducted in Shinto shrines to pray for abundant harvests. Fans, fresh from seeing their heroes up close in the Tokyo sunshine, will be hoping this particular ceremony leads to a scandal-free year as sumo looks to rebuild its tarnished reputation.