Blasts shake Damascus as US and allies launch Syria strikes 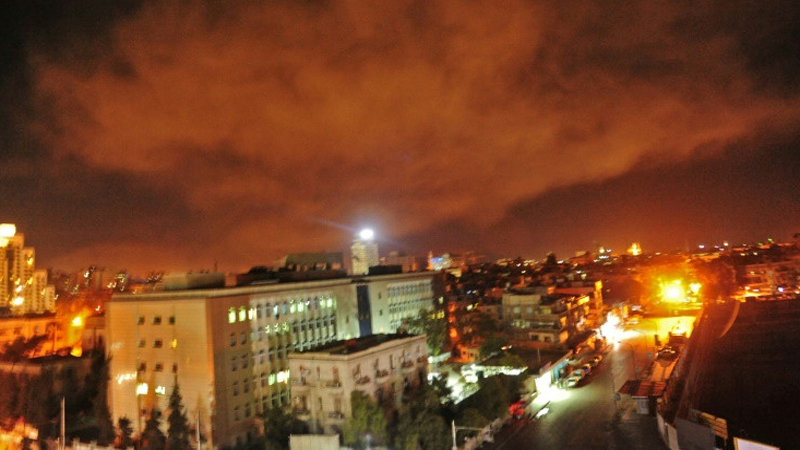 DAMASCUS: The United States, Britain and France carried out a wave of pre-dawn strikes against Syria’s regime Saturday in response to a suspected chemical weapons attack, lighting up the sky of Damascus as explosions shook the city.

A few minutes later, an AFP correspondent in Damascus heard a series of huge blasts and residents rushed to their balconies. For around 45 minutes, explosions echoed and the sound of warplanes roared over the city, as flashes flared in the distance.

As dawn broke, plumes of smoke could be seen rising from the city’s north and east.

In the biggest foreign military action so far against Syria’s regime, Western officials said a barrage of cruise and air-to-land missiles hit targets near Damascus and in Homs province including a scientific research centre, storage facilities and a command post.

Trump had suggested US military action could be on a large scale, but Saturday’s attacks were narrowly targeted and the facilities hit had reportedly been evacuated in recent days.

Syrian state media reported only three people injured and Russia’s defence ministry said there were “no victims” among Syrian civilians and military personnel.

Trump left no doubt the strikes were a direct response to an alleged April 7 chemical attack on the rebel-held town of Douma that rescuers and monitors say killed more than 40 people.

“The evil and the despicable attack left mothers and fathers, infants and children thrashing in pain and gasping for air. These are not the actions of a man. They are crimes of a monster instead,” Trump said.

US Defence Secretary Jim Mattis said no additional strikes were planned for now. “Right now this is a one-time shot,” he said.

Syria’s regime, which has repeatedly denied any use of chemical weapons, immediately denounced the strikes as a “brutal, barbaric aggression” that was “doomed to fail”.

Russia said it was calling an emergency session of the UN Security Council to discuss the “aggressive actions” of the United States and its allies.

“Without the sanction of the UN Security Council, in breach of the UN charter and the norms and principles of international law, an act of aggression was committed against a sovereign state,” the Kremlin said.

Joseph Dunford, Washington’s top general, said Syrian surface-to-air missile batteries had attempted to fire back, but there were no initial reports of losses, he added.

The Russian military said the allies had fired 103 cruise missiles including Tomahawk missiles but that Syrian air defence systems managed to intercept 71 of them.

At a rally in central Damascus, 48-year-old Nedher Hammoud claimed to have seen missiles “being shot down like flies”.

“Let them do what they want, kill who they want… History will record that Syria shot down missiles — and not just missiles. It shot down American arrogance.”

The impromptu early morning rally saw crowds of people heading to the famed Umayyad Square to show their support for Assad.

Draped in government flags and blaring patriotic tunes, dozens of Syrians arrived on bicycles, on foot and in cars spray painted with the red, white, and black colours of the Syrian flag.

Inspectors with the Organisation for the Prohibition of Chemical Weapons were due later Saturday to start work on a probe into the events of April 7 in Douma, the last rebel-held pocket of the onetime opposition stronghold of Eastern Ghouta near Damascus.

The Jaish al-Islam rebel group in control of Douma said the attack forced them to agree to a Russia-brokered evacuation deal, paving the way for Syria’s government to secure Eastern Ghouta.

“Punishing the instrument of the crime while keeping the criminal — a farce,” Alloush wrote on Twitter.

Syrian state media reported that internal security forces had entered Douma on Saturday and that the town would be secured within hours.

The strikes had been expected since harrowing footage surfaced of the aftermath of the attack in Douma, which prompted a furious reaction from Trump.

Trump’s anger was shared by France’s President Emmanuel Macron, who signed his country up for a joint response.

“We cannot tolerate the normalisation of the use of chemical weapons,” Macron said in a statement.

France said it fired cruise missiles from frigates in the Mediterranean and deployed fighter jets from home bases as part of its strikes.

Foreign Minister Jean-Yves Le Drian said “a large part” of the Damascus government’s stocks of chemical weapons had been destroyed.

“This collective action sends a clear message that the international community will not stand by and tolerate the use of chemical weapons,” Prime Minister Theresa May said at a press conference after the strikes.