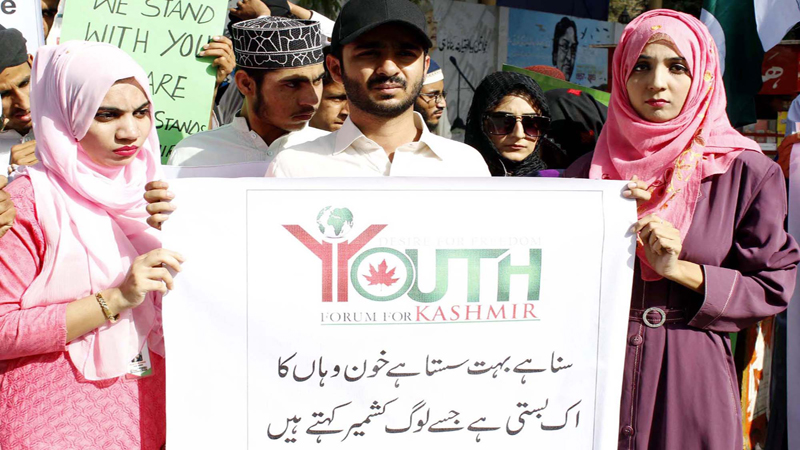 KARACHI: Kashmir Solidarity Day was observed in the metropolis on Friday with rallies held to express solidarity with people of Kashmir and to condemn atrocities and human rights violation committed by the Indian Army.

Protests were staged at all major intersections and rallies were led by different political and religious parties where the participants paid homage to those martyred by the Indian forces.

Protestors demanded to expose Indian atrocities at international for a and highlight the need for peaceful resolution of the longstanding dispute.

The biggest rally was held by the Jammu Kashmir Movement which started from Khalid Bin Waleed Road and ended at the Mazar-e-Quaid. Addressing the rally, JKM Leader Bilal Hydar said that for the first time in the history of Kashmir women and men offered funeral prayers together which showed the resolve of the Kashmiris in this struggle against Indian forces.

Another speaker Muzammil Iqbal Hashmi said that Kashmiris were not alone, ‘we are with them and will help them to get rid of Indian occupation at any cost’, adding that there was a need to show the real face of India to the world.

Muttahida Qaumi Movement-Pakistan held a rally from Liaqatabad to Karachi Press Club. Addressing the rally, Kanwar Naveed Jamil said that Pakistan would continue to support Kashmiri brothers and sisters at all levels to achieve their right of self-determination. Amir Khan said that no one could know the Kashmiris’ pain better than Muhajirs. Muhammad Hussain said that the recent brutalities against innocent Kashmiris had set a new example of Indian barbarism.

“India wants to suppress Kashmiris who are asking for the right to self-determination,” MPA Javeed Nagori said, adding that Pakistanis would continue to support Kashmiris at any cost.

Jammat-e-Islami (JI) also staged protest demonstrations at different areas, while the main protest of the party was held outside Baitul Mukkaram Masjid in Gulshan-e-Iqbal where Asadullah Bhutto addressed the participants. “India has killed innocent civilians and freedom fighters in Kashmir,” he said.

On April 3, the federal cabinet in its special meeting decided to observe Kashmir Solidarity Day on April 6 (Friday). The resolution was passed by Prime Minister Shahid Khaqan Abbasi in support of Kashmiri people and against Indian brutalities as Indian force in the latest act of state terrorism martyred 20 Kashmiris and injured hundreds of people, using weapons and pellet guns.