Even though the world’s second largest economy has a growth forecast of 6.5 percent of the GDP this year, the credit growth rate is quickly outrunning the GPD growth leading to a debt overhang problem

Last year, following the result of a health check, the International Monetary Fund IMF issued a warning that China’s economy is reliant on too much debt. The analysis of the China’s financial system found that credit was high by international levels. The recent rapid growth of the Chinese economy has known to be fueled by the huge debt levels at both local and government levels.

Adding to this the Bloomberg economists Fielding Chen and Tom Orlik estimate China’s total debt will reach 327 percent of gross domestic product by 2022, double the level in 2008. That will put China amongst the most indebted countries in the world.

Even though the world’s second largest economy has a growth forecast of 6.5 percent GDP this year, the credit growth rate is quickly outrunning the GPD growth leading to a debt overhang problem. The credit-to-GDP ratio is now about 25 percent above the long-term trend, very high by international standards and consistent with a high probability of financial crises.

If credit were to be growing at a sustainable rate, GDP would have increased by an average of 5.3 percent per year from 2012 to 2016, rather than the 7.3 percent that it achieved, estimates the IMF. Furthermore, research shows that almost all credit build ups in the past with ratios more than 100 percent have lead to a financial distress and ended on a bad note. The analysts in this case also foresee a similar scenario; as China has seen an increase in debt of more than 100 percent of the GDP since 2008.

It remains to be seen whether the current Chinese credit trajectory will lead to another financial crisis similar to the one 2008, or if China’s government will be able to achieve a balance between rapidly increasing credit growth and GDP growth

The Chinese Economy and its rapid growth fueled the crumbled western economies after the 2008-2009 worldwide financial crises. It was a prime source of stimulation of the world economy, however it came at a cost of higher government spending and easy credit. The expansion of the credit was not limited to high corporate debt but also resulted in an increase of household indebtedness.

Despite the facts and the high risk of a looming credit crises predicted by the IMF and various other economic agencies, a new research from analysts at Deutsche Bank show that the probability of the crises actually happening is actually lower. The research highlights that this is mainly due to a significantly large current account surplus held by China and low external debt, which offers protection (Cushion effect) and largely contributes to warding of a potential crises. 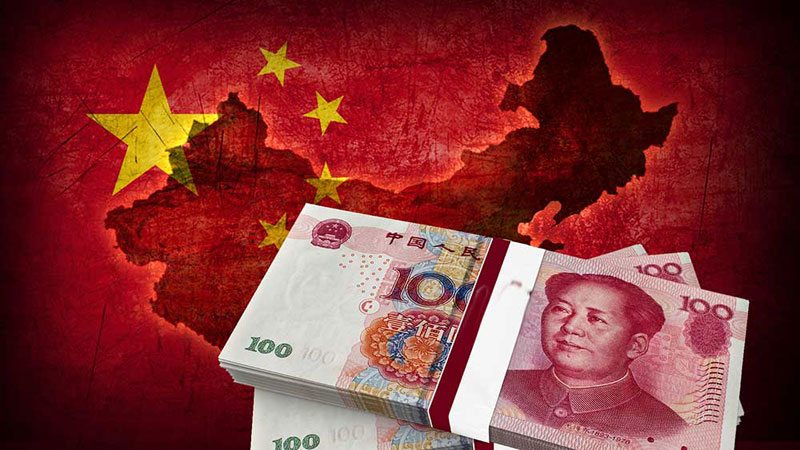 Furthermore, Deutsche Bank’s chief economist for the Asia Pacific region, Dr Michael Spencer quoted that “Had the current account been a deficit of two percent of GDP last year rather than a surplus of nearly two percent, the probability of a crisis would have been seven percent higher.”

Even though there is optimism regarding the probability of a crises befalling following the credit rise, it does not mean that China has avoided the risk and will certainly have to take active measures in order to maintain a sustainable growth and stabilise the credit rise in the economy.

Recognizing the potential threat, the Chinese government has already started taking actions to restrain the credit growth by intending to follow a tight monetary policy to deleverage the economy. While this may mitigate the problem in the short term, the growth target still remains at 6.5 percent for 2018, as a sharp deceleration could lead to distress the entire economy. On the other hand, IMF does not seem to be pleased with China’s current reliance on growth targets and have suggested replacing the GDP target with an unemployment target, to curb the reliance on debt-fuelled propulsion.

Weather the current Chinese credit trajectory would lead to another financial crises similar to that of the 2008-2009 following the distress of the western economies or will the Chinese government be able to achieve the balance between a rapidly increasing credit growth and the GDP growth, has yet to be seen.