New battle lines: Army will stand by judiciary if needed 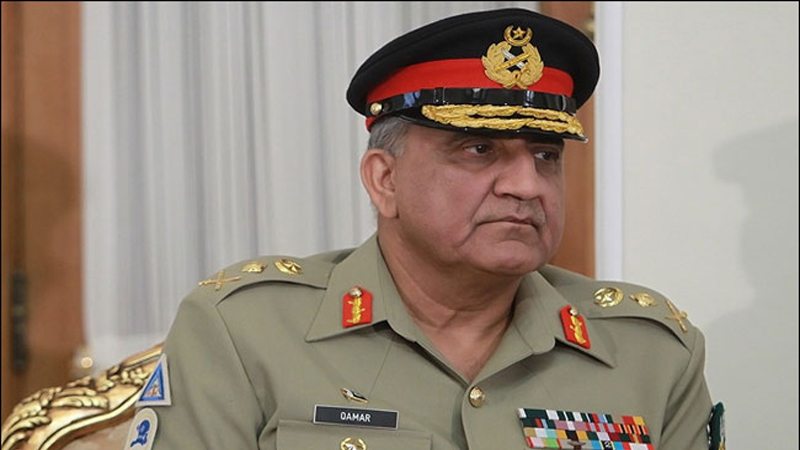 If statements from the PML-N and the GHQ are any indicators, then battle lines are drawn; the way forward for the former is anchored in a head-on confrontation with the judicial-military establishment in the weeks ahead.

For the latter, the path to salvation lies in protecting and preserving the integrity of all state institutions (Parliament, judiciary and military) as much as in upholding the rule of law (read: accountability) on the way to free and fair elections – come what may. And this categorical message came out of the GHQ, delivered by none than General Qamar Javed Bajwa, the chief of the army staff, himself in a rare interaction with a group of media persons.

If Pakistan has to survive and prosper as a normal state, the monopoly over violence shall have to unequivocally rest with the state. Non-state actors (read: jihadists) are neither acceptable any more nor relevant to the ideals of a functional, law-based democratic order, a visibly passionate Bajwa said.

“We shall have to dispense with all violent extremist groups if we want Pakistan to be recognised by the international community as a normal state,” underscored the general. The second part of the message, resonating within the military establishment, revolved around indiscriminate accountability.

“Indiscriminate application of laws – anchored in the Constitution – is absolutely essential if Pakistan has to extricate itself from the vicious cycle of mis-governance and selective application of laws. The current socio-political and economic crisis also stems from willful deviation from law by civilian and military elites. All these years, we have only managed the country, and not really governed, and we all contributed to it.

“But the rot must stop if we want to see Pakistan survive and prosper as a self-respecting nation,” said the general, who spared no one – including his own institution – when talking of the burden of responsibility for the country’s multiple crisis.

Thirdly, subversion of the judiciary or its rulings, so ran the message, will not be allowed. The country will descend into chaos if we let the Supreme Court be humiliated by those who don’t like its decisions.

Fourth, Pakistanis and the world at large should understand that the army today is different from what it had been until General Pervez Musharraf’s exit from politics.

“The institution has evolved and is much more sensitive to the criticality of a democratic order which we will vociferously defend,” he underlined, saying, “I saved democracy in this country, I am the biggest supporter of democracy.”

With the highest soldier to officer casualty ratio standing at 12:1 in military operations since 9/11, the army has performed at its best and deserves appreciation. Instead, our officers and soldiers are pained to see the frustrating negative narratives on the media, he complained.

But a caveat accompanied this assertion; democracy places huge responsibility on the political leaders as well. If they democratise parties and their conduct, this will leave little space for external manipulation.

Fourth, the security of the country is supreme, and prevention of subversion is the primary duty of the armed forces. We have managed to fight and defeat monsters (in KP, FATA, and Balochistan), who had been threatening the very existence of the country. Let’s not resurrect them for personal agendas.

National security far outweighs individuals’ interests. Everybody shall have to perform his/her function with honesty and integrity, said the general, in a veiled reference to the former prime minister Nawaz Sharif’s complaints about his disqualification.

Fifth, the parliament is supposed to revisit laws such as the 1861 Police Act and the 18th Amendment to correct the course of governance and capacity. In this world, everything, except the Holy Quran is open to review as societies evolve and face newer challenges.

Sixth, had we sincerely tried to implement the 20 points of the National Action Plan, we would probably have escaped grey-listing by the Financial Action Task Force (FATF), Bajwa said, in a jibe at the poor responses by certain civilian security agencies including the police.

Unfortunately, it is pointed out, former finance minister Ishaq Dar dragged his feet on a number of much-needed reforms related to money-laundering and terror-financing laws. The dismal state of Tax-to-GDP ratio – a mere 1.2 million tax payers – too is a shame for a 210 million strong country.

“He has been an utter disaster for this country.”

Yet, the grey-listing should be taken as a blessing in disguise because this has jolted us all out of slumber for doing the much-needed course-correction.

Seventh, political leaders like Altaf Hussein are history. All MQM followers should realise that ‘Altaf, violence and extortion’ are not acceptable at all. Everybody is free to indulge in politics, but not at the cost of the constitution and the law of Pakistan.

Eighth, we will sequence all counter-terror actions according to our own timeline and considerations. We are doing our best to woo Afghan Taliban into talks. “We have told them to either talk or leave us alone.”

The Taliban letter, with offer for talks to US president Donald Trump, was also part of those efforts, he suggested. But we certainly don’t have a 100 percent control over the Taliban or the Haqqanis. We have our leverages but will carefully deploy them because we can’t afford to burn our fingers all over.

Also, we will deal with all Afghan militants in a non-kinetic way to avoid a boomerang effect on our soil. The world should know that the Afghan Taliban or the Haqqani network are not regular armies. You can defeat an army but not an ideologically inspired non-state actor such as the Haqqani network or the Taliban – also recently acknowledged as political entity by President Ghani, General Bajwa reminded the audience.

Lastly, we cannot allow internal political strife to disrupt Pakistan’s present upward trajectory. We have suffered a lot for blunders committed by all the leading lights in the past. It’s time to rectify those mistakes and that is what we are doing.