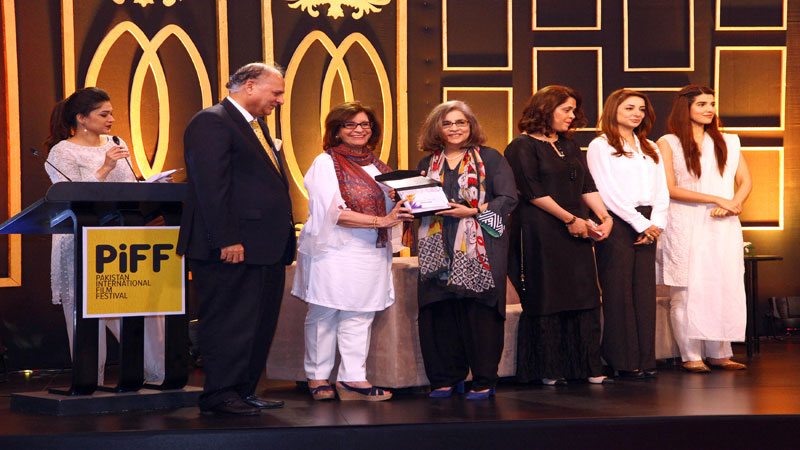 Pakistan International Film Festival (PIFF), under the banner of Karachi Film Society organised a seminar acknowledging the successes and achievements of women in the film industry. The seminar was attended by notable personalities from TV and Film.
The seminar consisted of two panel discussion hosted by actress Sania Saeed. The first panel consisted of actors who have achieved and are working in the film industry and have made their mark. The panel had Samina Peerzada, Nabila, Reema, Hasina Moin and Asif Raza Mir. This discussion was focused on the challenges and opportunities for women in the film industry of Pakistan. The second panel discussion started after a brief interval, which consisted of women who have been working for the betterment of the film industry for a long time. This panel consisted of Hareem Farooq, Sarwat Gillani, Sabiha Sumar, Fizza Ali Meerza, Momina Duraid and Zeba Bakhtiyar. The panel discussed their vision and the way forward for the Pakistani Film Industry.
Karachi Film Society and HUM Network Limited President Sultana Siddiqui who opened the seminar, explained the vision of PiFF and the importance of conducting such festivals to groom young filmmakers. She also appreciated the achievements of women and encouraged them to take advantage of the opportunities that are present today to inspiring filmmakers. While sharing her experience with the audience, she emphasised on keeping the passion alive despite the challenges and hardships to achieve glory.
Founding member of the Karachi Film Society MrSirajuddin Aziz (CEO Habib Metropolitan Bank) delivered a vote of thanks to conclude the seminar.
The inception of ‘Pakistan International Film Festival’ is a result of KFS’s desire to make the Pakistan film industry part of the global arena.  This festival will introduce the country’s blossoming film industry to international markets and will encourage local filmmakers to showcase their work to the local and international audience.