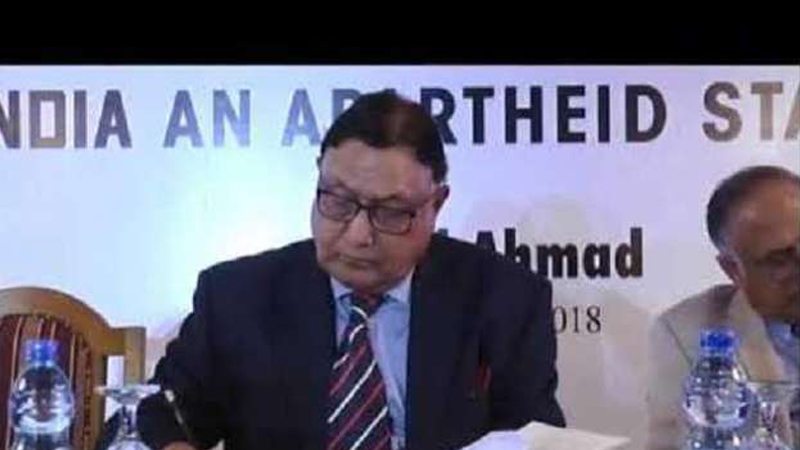 ISLAMABAD: India has emerged as an apartheid state totally dominated by the Hindu fundamentalists, according to a book written by academician Dr Junaid Ahmad to expose the true face of India.

The main theme of the book is that India claims itself to be a secular country but practically it is a Hindu state with a caste system which basically promotes inequality and discrimination on grounds of race. The critics appreciated the fact that the book was conclusive and based on well documented facts and references.

Talking about his book, Dr Junaid said there had been thousands of riots in India since its establishment in 1947. Hindus committed atrocities against Dalits, Muslims, Christians and Sikhs in the bloody riots spread over decades. He was of the view that the ongoing insurgencies in numerous states of India will eventually implode the country from within.

Former ambassador Riaz Hussain Khokhar said India’s secularism was a fraud and its democracy was limping. India was a very communalized, classified and stratified society, he said, adding India had calculated approach of subversion towards its neighbours. He said India devised a plan to dismember Pakistan in 1970 and also interfered in internal matters of its neighbours. “We need to know our adversary. We need to watch every step of India,” he said, adding that Hindutva as a political movement was an effort to reshape India.

Giving a different perspective on the state of India, former ambassador Abdul Basit said there was no doubt that India was stratified but the element of apartheid was a cultural issue and at least state’s constitution protected rights of minorities.

However, he agreed that India’s claims of a secular state did not match what was actually happening to the minorities and in different states with hostile populations.

A short video was also shown that exposed how Hindus were mistreating minorities in India, where the society was built on a decaying caste system. In the video, BR Ambedkar, author of India’s constitution, was quoted as saying, “If Hindu Raj does become a fact, it will no doubt be the greatest calamity for this country. No matter what the Hindus say, Hinduism is a menace to liberty, equality and fraternity. It is incompatible with democracy. Hindu Raj must be prevented at any cost.”

While on one occasion, Prime Minister Jawaharlal Nehru had said, “The ideology of Hindu Dharma is completely out of tune with the present times and if it took root in India, it would smash the country to pieces.”

Former Indian Prime Minister Dr Manmohan Singh on December 27, 2006, had stated, “Dalits have faced a unique discrimination in our society that is fundamentally different from the problems of minority groups in general. The only parallel to the practice of untouchability was apartheid in South Africa. Untouchability is not just a social discrimination. It is a blot on humanity.”

In his closing remarks, Dr Junaid said his book on Indian state was tip of the iceberg and a detailed study was needed to expose Hindutva, an ideology seeking to establish the hegemony of Hindus.

Dr Junaid Ahmed is a teacher and researcher and has over two decades of teaching experience in Canada and Pakistan.