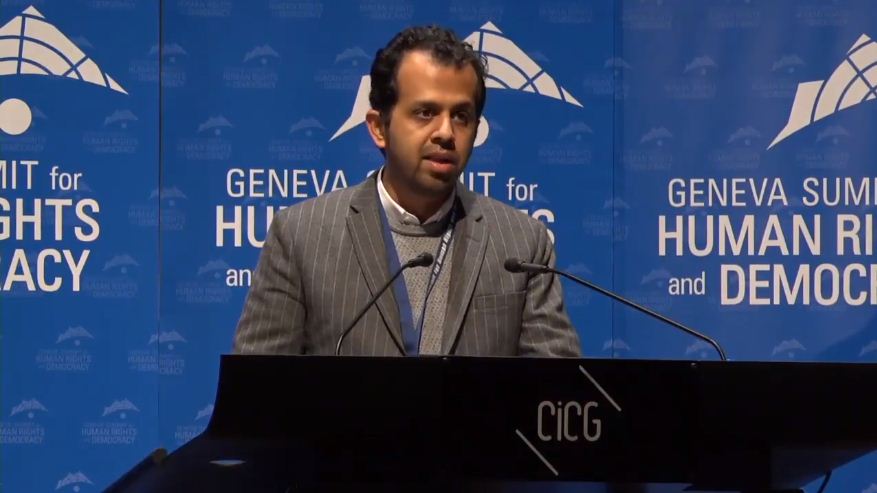 GENEVA: Pakistani journalist Taha Siddiqui, who is currently living in a self-imposed exile after an attempt to abduct him by unidentified men last month in Islamabad, has on Wednesday urged the global diplomatic community to side with Pakistani dissidents who are routinely abducted in the country are denied even the right to be called political prisoners.

Talking at Centre International de Conférences Genève in an event organised by United Nations Watch, Taha Siddiqui said that the space for the freedom of expression was continuously shrinking in Pakistan, where a number of political activists, journalists and social media users have gone missing during the last year or so.

“To outsiders, it may seem that the media in Pakistan is quite vibrant and independent, especially because it has almost absolute freedom when it comes to reporting on government and political parties. But scratch the surface and you will discover taboo topics, and that self-censorship is the norm. Such taboo subjects include – the military and religion, particularly Islam”, Taha said.

He added that over 100 journalists had been killed in Pakistan during the last 15 years and there were dozens of others who had been beaten, abducted or threatened into silence.

Siddiqui said that he had been working on the storiers relating to Raza Mehmood Khan, a peace activist from Lahore who went missing on December 2 last year, and Zeenat Shahzadi, a reporter who had recently returned from abduction after almost 3 years but had ‘disappeared from public’, when an attempt at abducting him was made.

Taha had barely survived an abduction attempt on January 13, 2018.

Talking to Daily Times, Siddiqui said the attacks on social media appear to be from the same accounts who ‘are handled by the people who are perhaps activated to do propaganda’.

He said he’s being mocked on the social media for what happened to him and people are posting memes and caricature to express their cynicism on the incident. He added that he isn’t concerned about the trolls because he has support from sensible journalist community who see his ordeal.

Siddiqui said he isn’t concerned even if some senior journalists such as Rauf Klasra have joined the bandwagon of those mocking me because he has the support of journalist community who is well aware of attempts to silence journalists. He added that the organisations he works for are also supporting him.

He said a witness, Mashal Butt, has come forth confirming the incident and hoped that more witness will come forth and corroborate what happened with him.

When asked about some of the meanest tweets that compare him with a ‘Bollywood hero’ and said it was too good to be true to escape almost a dozen armed men, he laughed a bit and said he doesn’t want to respond to such trolls.