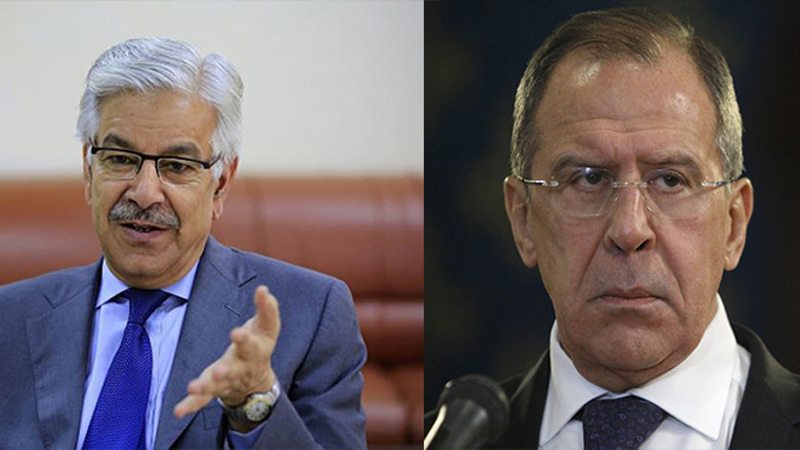 ISLAMABAD: As the Trump administration and its NATO allies are pursuing military options in Afghanistan despite their failure over the past 17 years, Pakistan and Russia will hold high-level talks in Moscow this week to explore ways for the political process to succeed in the war-torn country.

According to Russian Foreign Ministry, Pakistan’s Foreign Minister Khawaja Asif will pay a working visit to Moscow at the invitation of his Russian counterpart Sergey Lavrov on February 20. “The ministers will discuss the current state of affairs and prospects for strengthening of bilateral relations … and exchange views on important issues of the international and regional importance,” Russian Foreign Ministry senior official Maria Zakharova told a news briefing on Feb 15.

“Today we can state that cooperation with Pakistan features prominently on the list of Russia’s foreign policy priorities. We maintain an intensive political dialogue with Islamabad and maintain constructive interaction on international platforms, primarily, the UN,” she said. Record of the briefing was posted online.

Foreign Office Spokesman Mohammad Faisal did not reply to a query about the foreign minister’s visit. The spokesman usually does not offer comments on important issues, depriving the independent media of official version of the government of Pakistan.

Khawaja Asif and Sergey Lavrov are likely to focus on Pakistan and Russia’s role to press for political negotiations to end the Afghan conflict as both are concerned at the continuation of the war that is now a destabilising factor in the region.

Pakistan fully backs the Russian regional peace initiative for political solution to the Afghan conflict that has received strong support from regional countries including China, Iran and the Central Asian states which are directly affected by the continued war in Afghanistan. Pakistan had actively participated in all meetings Russia had hosted last year under the Moscow format of consultations on Afghanistan.

In January, Russia offered to host the representatives of the Taliban and the Kabul administration as part of its peace initiative. “For our part, we are ready to facilitate and will continue to promote the process of national reconciliation in Afghanistan. If need be, we are ready to provide, for example, the Moscow venue for contacts between representatives of Kabul and the Taliban,” the Russian Foreign Ministry spokesperson said on Jan 31.

Moscow’s approach about Afghan reconciliation is similar to Pakistan, which insists that every country should play its role for peace in Afghanistan which seemed elusive at least for now as the American commanders are implementing Trump’s new Afghan policy with troops surge and increase in aerial strikes against the Taliban. Pakistan had adopted the similar approach in the four-nation QCG process, however the US and Afghanistan would press Pakistan to bring the Taliban to the table.

In a trilateral meeting in Moscow in December 2016, Russia and China as the UN Security Council permanent members had confirmed their ‘flexible approach’ to delisting Afghan individuals from the UN sanctions lists as their contribution to the efforts aimed at launching peaceful dialogue between Kabul and the Taliban.

Taliban have long been demanding removal of the names of their leaders from the UN sanctions list as a confidence building measures for the political negotiations.

Pakistan and Russian foreign ministers will meet ahead of the meeting of the Kabul Process in Kabul on Feb 28. The first meeting was held in June last year at a time when the Russian initiative had received support in the region for peaceful solution to the Afghan problem.

Pakistani political analysts are satisfied with the increased interaction between Pakistan and Russia, the cold war era rivals.

Former ambassador Ayaz Wazir argued that deteriorating relations between Pakistan and the US was one of the major factors of Islamabad-Moscow relations getting stronger. “Pakistan and Russia do not want to fight the US but it is the US which considers Russia is a major threat and has also adopted a hostile policy towards Pakistan. Weeks after US suspended Pakistan’s aid, it is now leading a move to put Pakistan on a global terrorist-financing watch list with an anti-money-laundering monitoring group,” Wazir told Daily Times on Sunday.

“If the US harms Pakistan, we have the right to find other friends. Pakistan has already good understanding with Russia on the issue of Afghanistan. China, Iran, Turkey and Central Asian states also support the idea of peaceful solution to the Afghan problem,” he said.

Said Nazir Mohmand, a retired brigadier, opines that the US has adopted a ‘threatening posture’ towards Russia and Pakistan that is one of the main factors in Pakistan and Russia coming closer. “I think Pakistan is now on the path of strategic defiance against the US policies. Pakistan has already a trusted friend in the shape of China and its approach to boost relationship with Russia will have another alternative,” Mohmand told Daily Times.