Definitely, there are some sections who feel relieved at her death, but this is merely daydreaming.

Asma Jahangir is the paragon of excellence, a sublime and steadfast character. She was an eminent lawyer and leading human rights defender and voice of downtrodden, marginalised communities.  She will always occupy a prominent place in the pages of history.  She was not only an individual but an institution that inspired millions living in and out of Pakistan.

Her sad demise brought tears to the eyes of those whom she helped in her 66 years of career. She was the trailblazer in many senses. Throughout her life, she remained the target of those who wanted to silence her.

As a human rights activist, was she meant to speak only for a particular section? -the simple answer is  ‘no’. She fought for everyone in and out of the country and the marginalised religious minorities of the country were indeed very close to her heart.

In 1993, 11 years old Salamat Masih and his two uncles, Manzoor Masih and Rehmat Masih were charged with blasphemy allegations.

In one of the hearings at the court, the three Christian men were attacked by fundamentalists.   Manzoor Masih succumbed to the serious injuries whereas Salamat Masih and Rehmat Masih survived injuries.

Situation got worse after the attack killed the Christian man and galvanised so many others to agitate against the courts hearing such cases. Courts in Gujranwala remained under constant threat. And reportedly, under the duress, Judge Mujahid Hussain succumbed to pressure of extremists and declared the two Christian men guilty of committing blasphemy.

For her strong conviction to support minorities she faced bitter opposition but as mentioned before, she was a prisoner of her own conscience and could never be stopped by external agents. Time and again, efforts were planned to eliminate her, however, her courage and bravery defused all such plots

But the poor men were lucky enough; Asma Jahangir was braver than the judge and was all ready to fight for them.

In 1997, the LHC judge who acquitted the two men was assassinated over his decision.

Asma Jahangir’s house was also attacked by militants but they entered her mother’s house mistaking it to be Asma’s, and when assailants tried to shoot Asma’s brother and his wife, the gun did not work which gave them a chance to escape.

The case of the Christian minor compelled Asma for making security arrangements for her family members whereas the Salamat Masih blasphemy case became a hotcake news to the international world which not only elevated Asma Janaghir’s stature much higher as a human rights activist but she earned a great respect from Pakistani minorities. In that case, religious minorities were not aware of Asma’s work and commitment but her efforts for little Salamat Masih made minorities realized that there was the one, who could stand for their rights.

The poor minorities in Pakistan remain out of the mainstream social structure and power politics, so always they are an easy prey to extremists.  At the death of Asma Jahangir, once again they have found themselves in the maniac social structure where they need someone like her to clutch their hands to their rescue. She believed that Ahmadi Muslim were the most vulnerable section of the Pakistani society for the constitution of the country did not allow them to exercise their social life and faith freely. 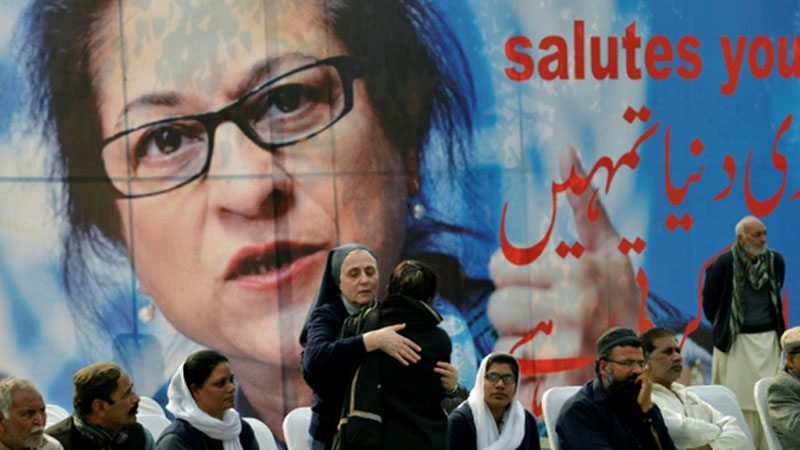 For her strong conviction to support the community she faced bitter opposition but as mentioned before, she was a prisoner of her own conscience could never be stopped by the external agents. Time and again, efforts were planned to eliminate her, however, her courage and bravery defused all such plots.

One such plot was leaked by Edward Snowden in 2012 that US intelligence was aware of the plan of the local powerful agency to kill Asma Jahangir against which she took an aggressive stance and exposed the plotters.

She was a one-person army though had huge admiration from millions of Pakistani and non-Pakistanis around the world but the prevailing theocratic environment of Pakistan never allows everyone to think and act like Asma Jahangir. After Nelson Mandela, Princess Diana, and Mother Teresa, she was the one who received such a huge respect and honour at her death.

As a human being, she has perished but her glorious legacy is erupting more aggressively. Definitely, there are some sections who feel relieved at her death but this is merely a daydreaming.

Her contribution towards the restoration of democracy and judiciary, human rights, embouchure of minorities, representation  and bringing stinking brick makers in the courts when judges were not ready to allow in their courts who stank,  struggle for women rights, protests against Hudood ordinance and other discriminatory legislations including blasphemy laws and national and international advocacy for a better Pakistan for all, regardless of their religion, sect, colour, caste, creed, sexual orientation and socio-political allegiances.

Sometimes, she was like an impetuous child who runs a great speed, falls headlong but gets up and carries on. Her life is a complete success story but behind her struggle there was a long history of oppression she faced in her six decades limited.

Over the years, because of her staunch ideology she reached to the intensity of her life’s activities which she kept till her last breath. Among those who believe they have lost their friend, well-wisher, supporter, carer, helper and voice, religious minorities very well justify their claim of Asma’s ownership.