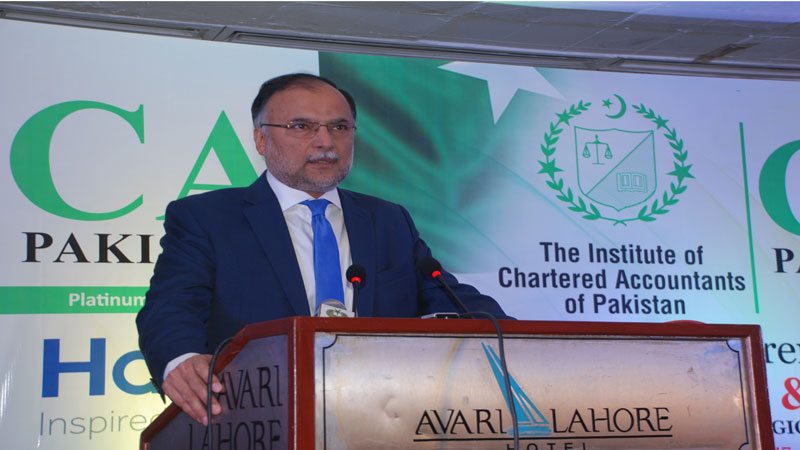 “In the eyes of world media, Pakistan is no longer a place of danger. The same media who declared Pakistan as safe haven for terrorism are now calling Pakistan as an emerging economy. It is a safe haven for Chinese investment, which has topped the chart in the Foreign Direct Investment (FDI) in Pakistan,” he said while addressing a conference titled: ‘CPEC-Myths and Realities’ at the Institute of Chartered Accountants of Pakistan (ICAP). The minister said that the Pakistani economy had a unique opportunity to take off due to the China Pakistan Economic Corridor (CPEC) and its investment.

The minister said CPEC could play a key role for country’s economic progress and prosperity, as it is a great gift from the Chinese government and people for Pakistan.

Iqbal, highlighting the importance of venture, said CPEC offered Pakistan an excellent opportunity to upgrade basic infrastructure of all provinces as the corridor essentially passes through whole of Pakistan.

“New roads, highways, railways, airports and Gwadar Port are to be built and developed according to the blue print of this ambitious project. Pakistan will be a major connecting link with various Asian economies.”

“By August 2013, Chinese foreign direct investment in Pakistan stood at 13th position and it became number one in FDI in the first three years since 2013 in result of strategic economic partnership between the two states.”

He informed the audience that the biggest-ever CPEC private investment worth $5 billion had been mobilised on Thar Coal project whose energy value was equal to oil stocks of Saudi Arabia and Iran. “We have wasted 70 years to tap our coal reserves. That is because of CPEC that coal stocks are now being used.” The minister said Pakistan required good stocks of foreign exchange reserves and increased exports and Gwadar Port city would help achieve the target through trade with Central Asia and other regions.

Iqbal said that Pakistan and China had set up a joint Business School Consortium which was aimed at uniting the businessmen and business sectors of both sides to promote B2B activities, which the government could not do except giving infrastructure.

He said CPEC would help build a robust and stable economy in Pakistan and create a significant opportunity for the country to revive its industry and advance its economic interests. “It will also help in overcoming the psychological barriers to flows of foreign investment from other sources. Peace and prosperity can be achieved with economic advancement.”