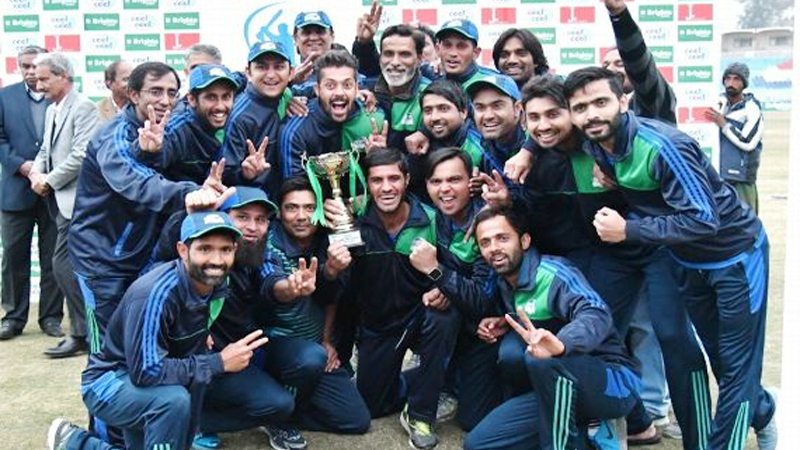 RAWALPINDI: Left-handed batsman Fawad Alam once again silenced his critics with a brilliant 149 off 130 balls in the final of the National One-day Cup for Regions to guide his team Karachi to a five-wicket victory over Islamabad at the Rawalpindi Cricket Stadium here Sunday. The player of the final Fawad walked in as Karachi were two down for 38 runs while chasing a hefty 348-run target set by Islamabad after the latter chose to bat first. The 32-year-old hit 18 boundaries to keep the score board ticking while his partner Akbarur Rehman (41 off 67) accompanied him till the 24th over. Another quick wicket of Faisal Iqbal (four off seven) meant Islamabad were back in the game with the run rate constantly on the up, but Danish Aziz (unbeaten 86 off 65 balls) hit six maximums and four boundaries to help him team’s cause. Together, Fawad and Danish pushed Karachi as close as possible to the target, but, with just seven runs needed, Fawad had to walk back after being dismissed off an Ahmed Bashir delivery. Karachi then went past the finish line with three balls remaining.

Earlier, Islamabad looked to have established a position of dominance in the first innings, Shan Masood setting the tempo with a brisk half century. Babar Azam rose to the occasion with his second century in three days, a 95-ball 105 the backbone of the Islamabad innings. Shahid Yousuf contributed an explosive innings, smashing an unbeaten 96 in 74 balls, and was unlucky to miss out on three figures himself. The match threatened to become a no-contest when Karachi lost their openers within the first eight overs with the score on 38. Akbar-ur-Rehman stabilised the innings the company of Fawad, but his 41 off 67 balls took time that such a huge chase simply couldn’t afford. It was a stunning fifth-wicket partnership of 192 between Fawad and Danish carried the against all odds.

“We achieved what we had planned,” Fawad said in the post-match presentation ceremony. “We also set up a camp before the tournament where we decided that we have to win this tournament. So, it is the result of the commitment and the team work shown by everyone.” When asked about his return to the national team even after piling up performances in all domestic tournaments, Fawad said: “My only job is to perform and leave everything else in the hands of Almighty.” Meanwhile, Islamabad captain Shan Masood lauded Karachi’s effort while chasing a mammoth target. “Karachi played really well. Fawad and Danish’s partnership made the match a one-sided affair. We couldn’t stop them from scoring boundaries at crucial moments. We dropped catches, I dropped a catch too, so we lost to Karachi because they outsmarted us in pressure moments,” said Masood. Winning captain Asad Shafiq was all praise for Fawad for his outstanding efforts in the match and in the past as well.