Concerns for integrated mountain conservation and development are becoming intense with every passing day as the climate impact has started showing its worst side. Not only the biological resources are fast diminishing because of unwise practices, but the lack of knowledge at the community level, and extreme neglect and absence of required will also among the authorities having scope and mandate of mountain conservation and development.

The severity of the situation may also be attached to the lack of desired community participation in the conservation mechanisms for the rational use of natural resources, protection of ecosystems and mountain habitats. Despite concentrated efforts by the Mountain Partnership and other vibrant and proactive international development organisations for the last 15 years, the challenges confronting mountain resources and communities are still on the back burner.

While the UNFCCC Conference of Parties keeps on debating the adaptation and mitigation measures for the downstream population to cope up the challenge of carbon emissions and its aftermaths, the most affected mountains and their natives remain low at priority. In the recent years, the staunch believers of taking up the mountain conservation and development to the front of the global development agenda have teamed up more cohesively for the common goals.

Emergence of the Mountain Partnership: The Mountain Partnership emerged in 2002, the International Year of Mountains. The Food and Agricultural Organisation of the United Nations (UN FAO), UN Environment and the governments of Italy and Switzerland decided to synergise their efforts to continue with the goals defined for the designated year to highlight the importance of mountains for every genre of life and livelihood.

Housed at FAO Headquarters in Rome (Italy), the Mountain Partnership is a United Nations voluntary alliance of partners dedicated to improving the lives of mountain people and protecting mountain environments around the world. It addresses the challenges facing mountainous regions by tapping the wealth and diversity of resources, knowledge, information and expertise to stimulate concrete initiatives at all levels that ensure improved quality of life and environments.

Currently, more than 300 governments, intergovernmental organisations, civil society, NGOs and the private sector, and subnational authorities are the members of the Mountain Partnership.

A ‘Framework for Action’ was created to support concrete actions as defined in the Agenda 2030 for Mountains and to put in place long-lasting processes and establish policies that strengthen the resilience of mountain peoples and environments was launched on the first day of the meeting and was endorsed by the governments and civil society.

Among the numerous networking and exchange opportunities was a speed-geeking session that saw ten members presenting their projects or ongoing work and six side-events that took place at lunchtime and in the evening.

On the final day of the Global Meeting, the Partnership considered how best to support the implementation of the Framework for Action and “gear up” for the next biennium. A new steering committee was elected, and after the meeting closed, the steering committee held its first meeting.

The Global Meeting Outcome: The Global Meeting highlights and key outcomes included the founding members’ consensus to strengthen the Mountain Partnership. The Framework for Action was launched at the start of the meeting and endorsed by the governments and civil society. Mountain Partnership members considered the challenges and responses of the Framework for Action and its alignment with the 2030 agenda for sustainable development.

The Government of Kyrgyzstan, the Secretariat of the Global Snow Leopard and Ecosystem Protection Program, the Aga Khan Development Network, GLISPA and the Carpathian Convention showcased practical approaches towards making the Framework for Action work.

A new Steering Committee for the period 2018-2021 was elected, with Italy as the Chair and the UN Environment and the Karnali Integrated Rural Development and Research Centre as vice-Chairs. 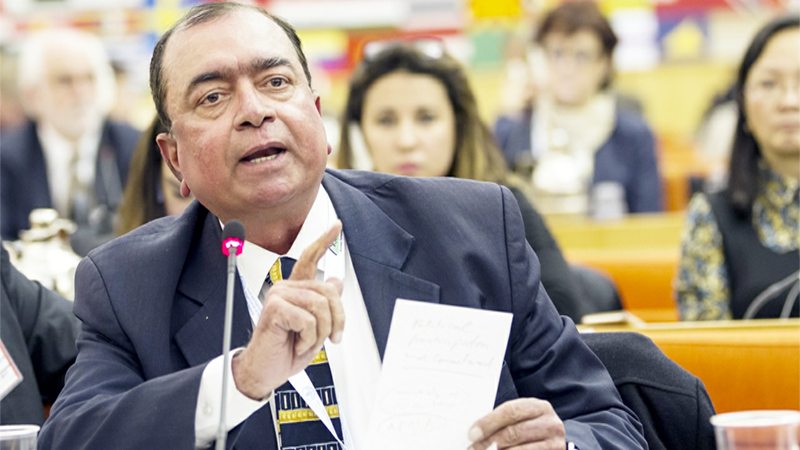 The momentum generated by the Global Meeting will be a driving force as members set out to tackle the priorities and central areas of work identified.

Opening with a high-level political segment: In the opening session, the founding members of the Mountain Partnership stressed the role of mountains in achieving sustainable development. They emphasised the role of the Mountain Partnership as the sole global mechanism that brings together countries and institutions to promote sustainable mountain development, and as the primary global tool to guard the landscapes, calling on members to take early action towards operationalising and resourcing the Framework for Action. The need to raise awareness about the impacts of climate change on food security and migration patterns and the vulnerability of mountain people in developing countries were noted by Maria Helena Semedo, Deputy Director-General, FAO.

The Mountain Partnership will build an alliance with GLISPA on fragile ecosystems, establish a multi-donor small grants facility, connect with other global initiatives, create and share knowledge on emerging issues, and form a political alliance of members through the Framework for Action

In his address, Mario Giro, Deputy Minister of Foreign Affairs, Italy, said the conference aimed to have Mountain Partnership members join forces around a common battle that is not just a declaration of intent, but that expresses a precise operational plan and a clear goal, represented by the Framework for Action. He stressed that Italy was on the forefront of promoting the Framework for Action and will support countries in its implementation.

Andrea Olivero, Deputy Minister of Agriculture, Food and Forestry, Italy, said that following the commitments of the 2030 Agenda, “nobody should be left behind”, and in the Paris Agreement on climate, mountains must be the core of any global political discussion and any cooperation and development activity. Dominique Kohli, Assistant Director-General, Federal Office for Agriculture, Switzerland, said the Framework for Action is critical for global sustainable development, and alignment with the Sustainable Development Goals (SDGs) will unlock indispensable environmental services, such as air quality and fresh water.

The religious and spiritual values of mountains and lessons on how to create successful mountain-based ventures were highlighted in the interventions of Mountain Partnership ambassadors: His Holiness Drikung Kyabgön Chetsang, head of the Drikung Kagyu order of Tibetan Buddhism; Arjun Gupta, founder, TeleSoft Partners; and Jake Norton, founder, Mountain World Productions.

Andrew Taber, Executive Director, The Mountain Institute and Chair, Mountain Partnership Steering Committee, expressed the hope that a similar community to that of the Small Island Developing States (SIDS) can be built among mountain countries, with support from civil society.

Several members, including the governments of Bhutan, Chile, Colombia, Kyrgyzstan, Nepal and Peru expressed their commitment to the mountain agenda and reiterated their appreciation for the Mountain Partnership.

Launch of the Framework for Action: A keynote speech by Petteri Taalas, Secretary-General, World Meteorological Organisation, highlighted the main pressures on mountains due to climate change, such as water shortages and severe floods with a resulting loss of economic opportunities.

Grammenos Mastrojeni, Assistant Director-General, Coordinator for the Environment, Ministry of Foreign Affairs, Italy, emphasised the role that the Mountain Partnership can play in bringing the destabilisation of fragile mountain ecosystems to the attention of decision-makers, as the impacts on mountains are felt on people living in the lowlands.

Several statements by members confirmed the endorsement of the Framework for Action and the commitments to its implementation.

The Framework for Action and the 2030 Agenda – challenges and responses: In this session, members considered the Framework for Action and its alignment with the 2030 Agenda for Sustainable Development, around four themes: the relationship between mountains and climate change and disaster risk management; food and water; mountain goods and services; and mountain communities and migration.

On “Mountains: climate change and disaster risk management”, keynote speeches described trends in increasing temperatures and changes in precipitation in mountains as well as the impacts of melting glaciers, such as runoff, natural hazards, species extinction and reduced growing seasons, biodiversity protection and food production; and highlighted that climate variability is going beyond the limits of experience. FAO warned that approximately 3.5 billion people depended on water originating in mountains, and every year, natural disasters affect vulnerable forest-dependent and mountain communities. FAO noted its research on quantifying the impacts of these disasters on agriculture and human systems and the increasing need to build climate resilience, stressing the crucial role played by healthy mountain ecosystems.

Keynote speeches by Anil Mishra, Programme Specialist, UNESCO, and Paul Mafabi, Director of Foreign Affairs, Ministry of Water and Environment, Uganda, on the theme of “Mountains: food and water” stressed the increasing levels of threat to water security and the limited coverage of global in situ observation systems in alpine regions, and highlighted available tools to support decision-making.

Two keynote speeches by Krystyna Swiderska, Principal Researcher, International Institute for Environment and Development, and Laurie Vasily, Head of Knowledge Management and Communication, International Centre for Integrated Mountain Development, explored the issue of “Mountain communities and migration” with the analysis of cases from the Hindu Kush Himalayan region, where mountain depopulation is a new trend, with considerable effects on social and ecological systems, and from Peru, highlighting Biocultural Heritage Territories like the Potato Park as a key response to climate change, hunger and migration.

Making a Global Framework work – showcasing practical approaches: A panel discussion focused on practical approaches for creating the Framework for Action work, showcasing the experience of the Global Snow Leopard and Ecosystem Protection Program, GLISPA, the Aga Khan Development Network and the Carpathian Convention. The importance of using networks and partnerships to advance the objectives of the Mountain Partnership was emphasised, and cultivating closer bonds between GLISPA and the Mountain Partnership was recommended. GLISPA representatives identified the success factors in gaining attention for the initiative as being “not merely relying on donor funding, but leveraging funds through tourism levies, using in-flight videos to broadcast the message of islands under threat, introducing pledge stamps in tourist passports, and collaborating with all small island entities”. The reasons for SIDS’ high profile in political circles include partnerships and political leadership; strong sense of “co-opetition”, where islands encourage each other to make more significant commitments; sharing lessons on how to implement the SDGs; and regularly participating on the global multilateral negotiations stage.

The writer is Islamabad-based policy advocacy, strategic communication and outreach expert, and founder and director of Pakistan Mountain Festival. He can be reached at devcom.pakistan@gmail.com. He tweets @EmmayeSyed